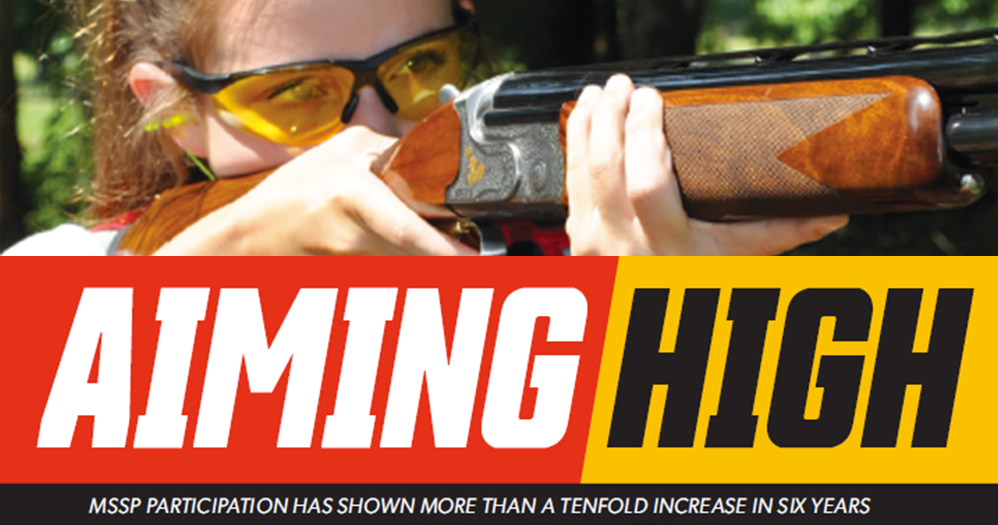 When a Canton Academy parent asked Jad Touchton how the school could set up a shooting competition with the Jackson Preparatory School’s team, it sparked an idea: create a shooting sports program for all of Mississippi’s youth.

“Jackson Prep, until that time, was only competing against themselves,” said Touchton, Mississippi Department of Wildlife, Fisheries, and Parks’ (MDWFP) Shooting Range Manager. “I’m a competitive shooter, so I started researching what was out there and seeing what other states were doing. I came up with a program that we could tailor to Mississippi. And then I wrote the handbook.”

Touchton’s creation, Mississippi Scholastic Shooting Program (MSSP), was initiated six years ago by MDWFP. Since its inception, MSSP has provided a competitive outlet for seventh- through 12th-grade students interested in shooting Skeet, Trap, and Sporting Clays.

“It was implemented with only four schools,” Touchton said, “and by word of mouth and pounding the pavement, we are where we are today. It has grown into something much bigger.”

Indeed, shooting sports’ popularity is on a tremendous trajectory. MDWFP Director of Outreach Programs Michelle Carter said the number of participating schools for the upcoming school year is expected to be around 50, up from 29 in 2019.

“The goal is to get all 82 counties exposed to MSSP,” Carter said.

Similar to Archery in Mississippi Schools (AIMS), the cited purpose of MSSP is to introduce and encourage participation in outdoor sports; promote life skills, such as discipline, safety, and teamwork; and promote ethics and self-confidence.

“We want great students, but we want people who are going to make our community better,” said Brant Kairit, president of the Senatobia Municipal School Board. “And we think this is another activity where kids can participate and learn the value of teamwork, hard work, and discipline. We’ve just seen a lot of rewards with it.” 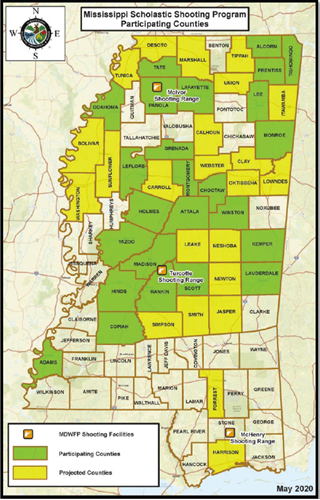 As a former high school teacher and coach, Carter feels comfortable in communicating in “the schools’ language” when she is on the MSSP recruiting trail.

“I coached at Puckett (High School): basketball, cheerleading, and track,” said Carter. “I understand education, but I am still a stranger to these schools. I would guess half of the time I can convince schools that MSSP is an excellent program. But if one of our Conservation Officers accompanies me, someone who has a connection to that school and who works in that county, those chances significantly increase.”

Jared Patterson, a Conservation Officer in Webster County, said he received overwhelmingly positive feedback from the schools he has visited.

“I think it helps build relationships between us, as Conservation Officers, and the schools and the educational environment,” Patterson said. “Most of the schools are really excited about (MSSP). It gives their students an opportunity to participate in another sport besides your traditional football, baseball, and basketball.”

Carter said that before a school invests time in an extracurricular program like MSSP, it must consider the following:

Liability: What are the risks?

Costs: How much money does it take?Seasons: Will it offset the balance to their current extracurricular schedule?

“What makes MSSP so great is all three of those questions are easily answered,” Carter said. 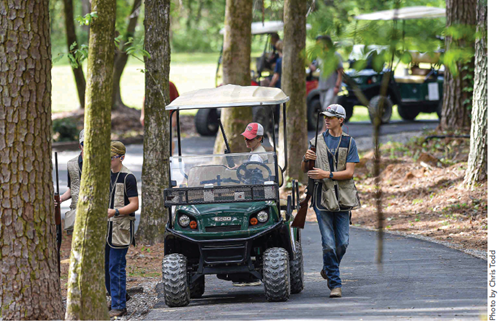 Carter explained that a standard school insurance policy covers shooting sports under the same category as a “high-risk” activity, such as football.

In addition, all practices and events take place away from a school’s campus. Competitions are held on two of MDWFP’s three shooting facilities, Turcotte Shooting Facility and Education Center in Canton and the newly opened McIvor Shooting Facility near Sardis. Because of MSSP’s success, a sporting clay course is being considered at McHenry Shooting Facility in Stone County for those in southern Mississippi.

Firearm safety is a pillar of the program. MDWFP provides teacher-coach training and requires participants to complete the Hunter’s Education Course before a competition. Also, at each MSSP event, Conservation Officers help enforce safety rules and work with coaches to ensure a safe environment for shooters, spectators, and range personnel.

Teams compete in Skeet, Trap, and Sporting Clays. Each shooter is required to attend at least eight practices before competing in a shoot, and a Proof of Practice Attendance Sheet is required when turning in a team roster.

“(In eight practices), you can learn safety,” Carter said. “Now, would you be proficient at shooting and hitting the target? Maybe not, but you would be safe on the range and handling a firearm.” 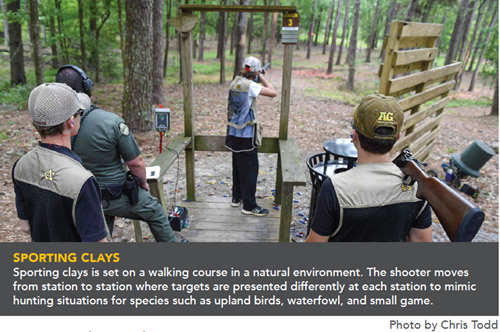 Many MSSP teams apply for Youth Participation Initiative (YPI) grants to help get their programs started. The YPI was established in 2009 to help fund programs that educate children in hunting, fishing, conservation, and safety.

“YPI is legislature-appointed funding that can help start recreational programs, but it is not meant to fund the life of the program,” said Conservation Officer Capt. Megan Fedrick, MDWFP’s YPI grant coordinator. “Funds are limited. Of course, we’ve tried to fund everyone that meets our guidelines. But, again, this is to help you start something and, after that, you have to do the work to promote it and get your community involved.”

Schools can use the grant money to pay for uniforms, travel, shells, clay throwers, and practices at shooting facilities. Money cannot be used for salaries, firearms, facility construction, or range memberships. Schools can apply for YPI grants each year. In 2019, 16 schools applied. In 2020, there were 37 applications, including 21 new schools. Fedrick said newer programs generally are given preference.

As programs become more established, they wean themselves off grant money. Some retain sponsorships, some charge participation fees, and some do both.

MDWFP incurs all costs for competition, except for ammunition. There are no registration fees, no gate fees, and no payment to officials. A school uniform is not required, but eye and ear protection are. Protective gear is made available to the participant by MDWFP at less than $5 per competitor.

Competitors must provide their own firearm, which cannot be purchased by the school or by MDWFP. However, team-mates can share a shotgun on the course. 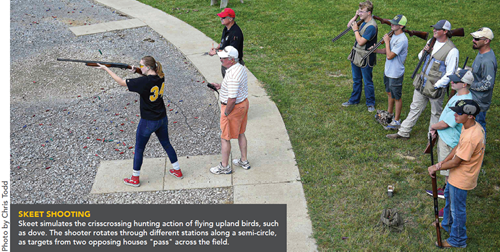 MSSP is considered a club versus a sport, and is not sanctioned by the Mississippi High School Activities Association (MHSAA) or the Mississippi Association of Independent Schools (MAIS). Therefore, the season runs the entire school year (August-May).

MSSP holds qualifying tournaments in November and December, followed by a state championship in May. Those event dates are set to avoid things such as Friday night football games, state testing, final exams, and also the opening days of hunting seasons. The shoots in November and December are multiple-day events with each school assigned a specific three-hour flight time on one day. Essentially, a student would miss only two days of school.

“We start practicing in August and run it through February. We try to practice once every two weeks,” said Joey Buchanan, head coach for a private team in Lafayette County, the Oxford Clay Busters. “We’ve got football players, a girls’ soccer player, kids that play baseball, and kids that don’t play any sport. We’ve been able to bring all these kids together.” 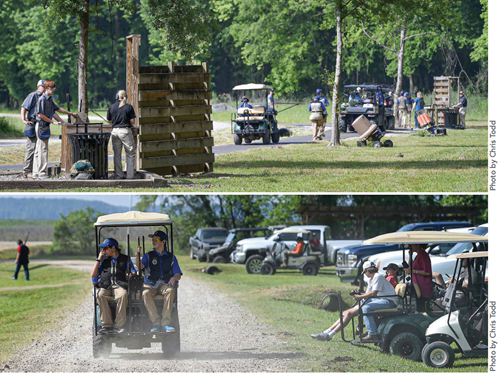 For each winner, the money will be put in a Mississippi Affordable College Savings (MACS) account, which draws interest. The student and parents can also contribute to the account.

“We’ve got one person who started winning in the eighth grade, and he now has $5,000-plus to start his future,” said Carter. “He is going to become a diesel mechanic, and he doesn't quite need the entire amount to obtain that degree. He'll use what he needs, and then he will have a bit of cash to start his life.”

MSSP pays dividends for Mississippi outdoors and conservation, too.

“My goal was to get the youth of Mississippi familiar with shooting sports,” Touchton said. “I also wanted to figure out how to do these tournaments for free. The department’s goal is the introduction to the outdoors. I think it’s a very good program for that. It teaches the kids a skill they can use.”

East Rankin’s Addison Brown, who finished second in the female Skeet and Sporting Clays competitions at the state championship, is an example of how MSSP makes an impact beyond the competition. She grew up around hunting, but she had never shot a shotgun until she was encouraged to try it while visiting her aunt’s house. They had a hand thrower set up, and Addison gave it a try.

“She missed the first one or two,” said Curtis Massey, Addison’s grandfather. “Then I told her how to aim a shotgun, because she had never aimed one. She hit like eight or nine in a row.”

Addison, who first qualified for the East Rankin team as a seventh-grader, and her grandfather now frequently go to shooting ranges to practice. According to Massey, he will give her tips and “she listens to everything.” They even have competitions against each other just for fun.

“She is so much better than me, I hate to shoot with her now. She kind of embarrasses me,” said a smiling Massey. “I’ve never taken her dove hunting, but that’s next on our agenda.”

“They’ve gone to Turcotte and McIvor, all these places,” said Lauren Brown, Addison’s mother and Curtis’ daughter. “And it’s something they can do forever, not just until school ends. It’s a bond that my dad and my daughter have, and I think that’s special.”

For more information about MSSP, visit mdwfp.com or contact Carter at michelle.carter@wfp.ms.gov or (601) 432-2276.