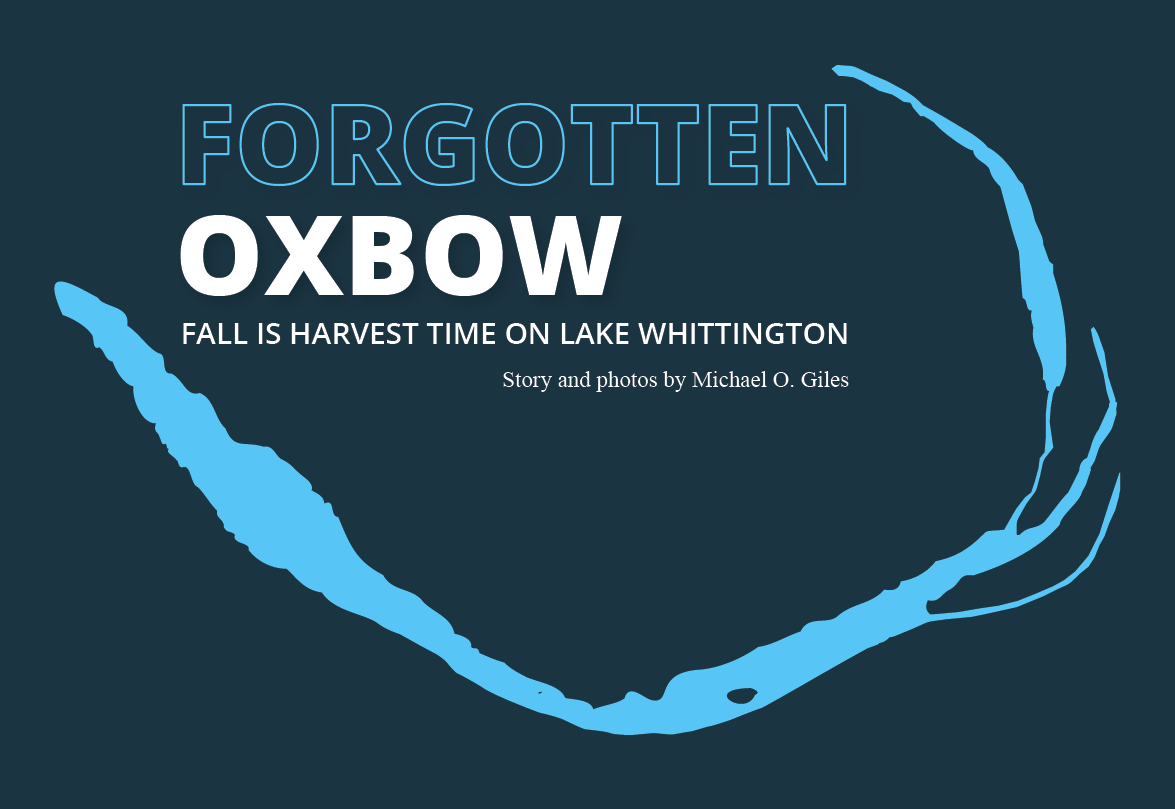 Shad skittered on the water surface in a partially submerged laydown tree a second before a bass smashed into the school, sending a spray of water and shad across the water’s surface. Greenville’s Terry Bates quickly cast a popper into the edge of the brush top and let it sit a second before twitching the rod tip and lure.

A bass exploded through the limbs and smashed the lure, and Bates drove the hooks home. The bass wallowed on the surface and fought wildly, but he was no match for this veteran angler of many bass wars. Bates posed for a quick picture and then released a lunker to be caught on another day.

A former fisheries biologist with the U.S. Department of Agriculture, Bates has been catching bass and winning tournaments on the Mississippi River and its oxbows since the early 1980s. Bates has also guided countless people on largemouth and white bass trips during that time.

Although Lake Whittington is no secret to local people, it is one of Mississippi’s forgotten jewels in terms of bass fishing. The lake is located in Bolivar County, about a 45-minute drive north of Greenville by vehicle. It can be accessed from late winter through early fall by a fee ramp open to the public, or from the river via canal when the river is at least 18- to 20-feet deep at the Greenville ramp gauge. The launch ramp will be closed on Nov. 8 and reopen Feb. 1. 2021.

“The beautiful scenery and the location of the lake are pretty unique, and it has access to the river most of the year,” said Chad Washington, Mississippi Department of Wildlife, Fisheries, and Parks (MDWFP) fisheries biologist. “Lake Whittington has excellent bass and crappie fishing, which is typical of most Mississippi River oxbow lakes.”

Like many of the oxbows located along the Mississippi River, it is not uncommon to catch 3- to 5-pounders regularly when the river is stable. Many river tournaments have been won with five-bass limits averaging 5 pounds or better caught from this oxbow lake.

“The location of the lake and the area that it is located in makes access limited much of the year,” Washington said. “But that is another reason the fishing has been pretty good for a few years now; the fishing pressure is lower than in a lot of oxbow lakes.” 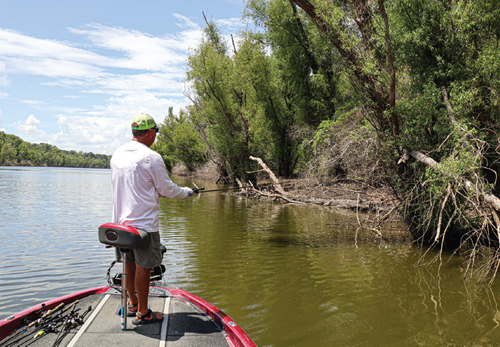 During a recent fishing trip with Bates, the bass were located tight to the wood structure, and they were keying on shad. We caught quite a few on popping plugs and chuggers during the early morning hours. If the fish are shallow and active, Bates always loves to catch a few on topwater.

“I’ll fish deep until it cools off, and then I’m going to hit the shallow wood with a spinnerbait, topwater, or worm, and that’s what we caught them on last fall,” said Bates. “I’ll target wood cover or anything in the water after it cools off a bit because they will be on it.”

Bates has a rod locker in the center of his boat under the floor so he can have multiple rods already rigged and ready to go. As far as topwater goes, he is going to have one rigged with a Pop-R-sized lure and one rigged with a medium prop bait.

“When the water cools off in the fall, they’ll be keyed in on (a topwater prop bait),” said Bates. “Cast that thing out and let it sit a few seconds, then twitch it and work it around limbs and laydowns. Many times all it takes will be the twitch after a slight pause.”

“I like to use the short rod so that I can make short jerks, and it doesn’t work me as much as the long rods do,” said Bates. “I prefer the mono because it helps the chugger stay on top and doesn’t sink like fluorocarbon. I’ve caught some 7-pounders on that short rod, and it really does the job.

If the bass have not moved up to the shallow cover yet, Bates always has a Carolina rig and crankbait tied on and ready. If the bass are deep, he will use a deep-diving crankbait to probe the depths and find the bass and then follow up with the Carolina rig.

“I’ll use a crankbait and cast it on 12-pound fluorocarbon line,” Bates said. “I like chartreuse blueback and pearl blueback colors. But my old standby has always been a baby bass color with a chartreuse belly.”

On a recent trip to Whittington, Bates found the bass gorging themselves near the laydown logs and treetops, and he utilized a crankbait that dives between 5 and 8 feet in a variety of techniques. Bates likes to cast the crankbait as close to the wood cover as possible, pause it a few seconds, and then twitch it a couple of times. On more than one occasion, he drew a strike from hungry bass. If the bass did not strike after the second twitch, he would simply crank it down and reel it to the boat.

We caught several bass about halfway to the boat on the crankbaits along the drop and even got several doubles. When bass are active, the strikes come frequently on the river lakes, especially when there is any current. 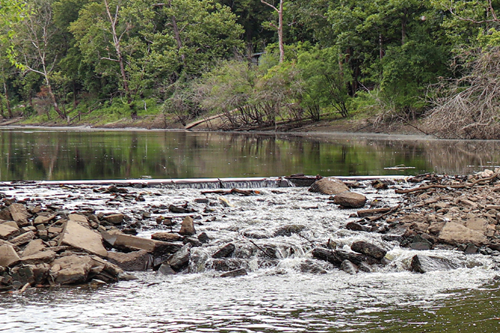 “My main fall set-ups are a ½-ounce double willow leaf spinnerbait, a 3/8-ounce chatterbait in chartreuse or chartreuse and white, a crankbait and a Carolina rig,” said Bates. “I’m always going to have a Carolina rig and crankbait tied on no matter what’s going on.”

Bates worked the shallow cover with the skills of a seasoned surgeon as he dissected the cover with spinnerbaits, chatterbaits, and crankbaits. Two years ago, he fished on the “Mississippi Outdoors” television show here with Larry Pugh, MDWFP Director of Technical Programs, and crushed the bass with these lures.

“The lake was a little shallower that day, and the bass were tight to the cover, and they struck anything I got close to them,” Bates said.

Although Bates prefers the fast-moving baits when he is fishing in the fall, if the bite is slow or the bass have a case of lockjaw, he will slow down and use a Texas rig creature bait.

“I like the brush hog, no matter what time of year it is,” said Bates. “I’ll use the big one when they’re biting and usually catch some lunker bass. But if they slow down, or they are finicky, I’ll down-size to the baby brush hog. It’s just hard not to go fishing and not take a brush hog; they’re that good.”

If the bass are sluggish, Bates will go to a scented Senko-style worm and pitch it around the cover. The scent entices bass to strike and hold on longer, and sometimes that is the key to catching finicky bass. Many of the strikes will occur on the initial fall.

“During the spring, the lake will usually be super high, so the lake is bigger, and the fish are scattered much more,” Washington said. “During late summer, the lake usually will get down pretty low and sometimes almost splits into three different lakes and access from the river is cut off. Typically the fishing is better here when the lake is low, and the water level starts to pick back up.” 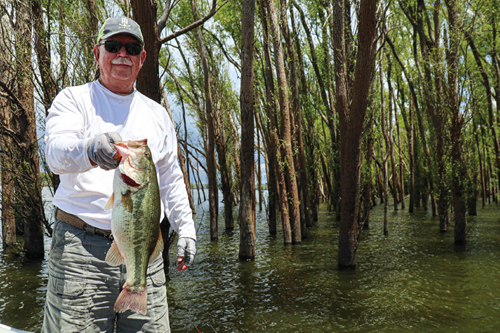 An added benefit of fishing river oxbows like Whittington is the huge population of white bass that roam the waters. When you find a school of white bass, they can range from a half-pound to 3 pounds. They attack lures with a vengeance, and the initial strike feels like a lunker bass hit your lure. Bates eased his boat within casting distance of a small dam that had water flowing over it, cast his crankbait out, and instantly got bit. I followed suit with a cast to the same spot as well.

Bates and I both doubled up on white bass, and the fun began again. For the next 15 to 20 minutes, we caught and released white bass that struck so hard they almost tore the rod from your hand on the initial hit. When the action has been slow a while, encountering a school of white bass is an exciting change of pace.

As we kept casting, we also caught a few largemouth bass mixed in with the white bass, so you never knew what you were going to catch on any cast.

While Mississippi has many beautiful lakes and oxbows, a few of the lesser-known lakes, like Lake Whittington and Lake Lee, hold the potential for excellent bass, bream, and crappie fishing and are usually productive when the river is stable or on a slow fall.

For more information on Lake Whittington or bass fishing the Mississippi River oxbows, go to mdwfp.com.

Michael O. Giles is a freelance writer for Mississippi Outdoors.