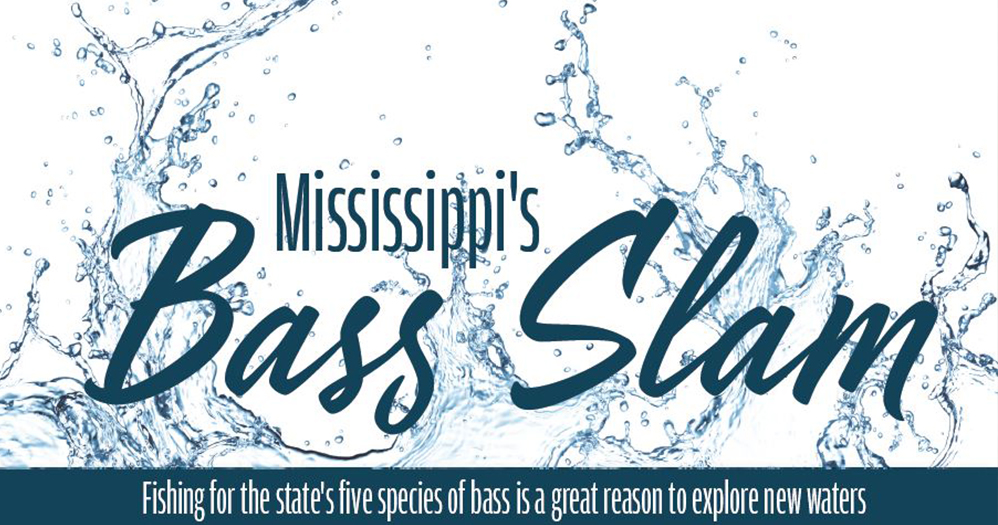 Our walls hold mounted fish, deer, and squirrels, plus fish and wildlife artwork. Shelves and the mantle display turtle shells, pinecones, and driftwood. A bookcase overflows with field guides. We appreciate the beauty and diversity of creation. In short, we are collectors.

Field guides broaden our knowledge of Mississippi’s many plants and animals. “Little yellow and blue-gray bird” is recognized as a Prothonotary Warbler that inhabits wet areas. Bird watchers are notorious “collectors” of species seen and identified. “Life lists” are kept by avid birders who go to the ends of the earth to add to their “collection.” Most hunters are familiar with a “Turkey Slam,” where they try to take all the known species and subspecies. This “bird collection” requires travel-ing around the country and out of it. Learning new techniques, exploring different environments, and meeting new people are part of the experience.

Anglers can be collectors, too. When I fish with my sons, we not only count how many fish we catch but how many different species we land (we have caught as many as eight species in one evening at Blackwater Creek). Mississippi has hundreds of fish species, located from the rocky hills in the northeast to the “Big Muddy” and its oxbows. Making a life list of all the fish species you might catch could be overwhelming, plus time-consuming and costly.

Our “bass” are actually in the sunfish family that includes bream and crappie. They are also called “black bass” because of the color of their fry. “Ground zero” for black bass diversity is the Southeast because it was ice-free in the last ice age. DNA analyses have identified from nine to more than 13 species, depending on whether you are a “lumper” or a “splitter” when determining species or subspecies. Alabama, Georgia, and South Carolina have the most species; several are found in limited areas with some in just a few streams. 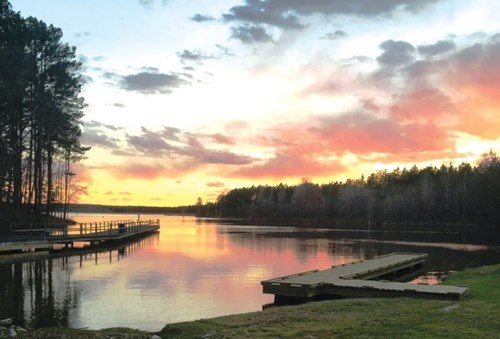 Northern and Florida largemouth bass differ from all other bass in two ways:

Other bass have smaller mouths and more connected spiny and soft-rayed dorsal fins. Found statewide, most northern large-mouth bass populations have genes from both. Genetic testing has found the purest northern populations in Arkabutla and Enid reservoirs and connected Mississippi River oxbows like Tunica Cutoff or Lake Whittington. Northern and Florida largemouth bass look virtually identical. To tell them apart, count their lateral line scales: 59-65 for northern and 69-73 for Florida.

Pure Florida bass in Mississippi only ex-ist where they have been stocked alone. Renovated Mississippi Department of Wildlife, Fisheries, and Parks (MDWFP) state fi shing lakes and state park lakes are often stocked with Florida bass, especially in southern parts of the state where they are less likely to die in the winter from cold water temperatures. State Lakes Monroe and Lamar Bruce have been stocked with Floridas, as has Neshoba County Lake. State Lakes Columbia, Bill Waller, Jeff  Davis, Bogue Homa, and Calling Panther also have them. State Park Lakes with Floridas include Lake Lincoln, Lake Tangipahoa, Natchez Lake, and Geiger Lake.

Research has shown Florida bass do better in clear, weedy, non-fluctuating waters. They are more sensitive to low temperatures, are harder to catch, and live longer than northerns at the same latitudes. Their longer lifespan and less aggressive nature can explain why some Floridas grow larger than northerns. Research has also shown trophy Florida bass are usually the original stocked fish 5-10 years after stocking. Bass anglers prefer Floridas because of the potential for trophies, but they are not a cure-all; if you have a pond full of stunted bass, stocking Floridas in it will still result in stunted bass. Techniques for catching northerns and Floridas are virtually the same. However, big Florida bass are more likely to ignore traditional artificial lures in favor of large, live natural baits like shiners or shad. Some anglers elicit strikes with oversized artificial baits. 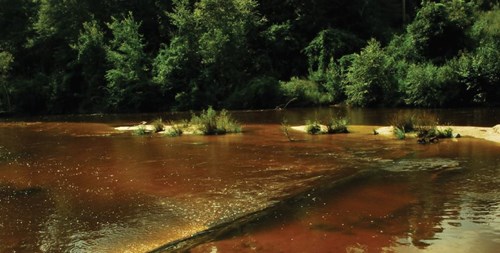 Northern spotted and Alabama bass resemble largemouth bass with a dark stripe down the side, but they have smaller mouths and connected dorsal fins. They are named for the rows of dark spots (one per scale) on their sides below the lateral line. Spots al-ways have a tooth patch on their tongues, but some largemouths do, too, so this is not a positive identifier. Some anglers call spots “redeyes,” but usually just spawning males have red eyes. Northern spotted bass inhabit most of the state and a large portion of the midsection of the country, hence the nickname “Kentucky bass.” Northern spotted bass have 58-71 lateral line scales and rarely exceed 3 pounds. 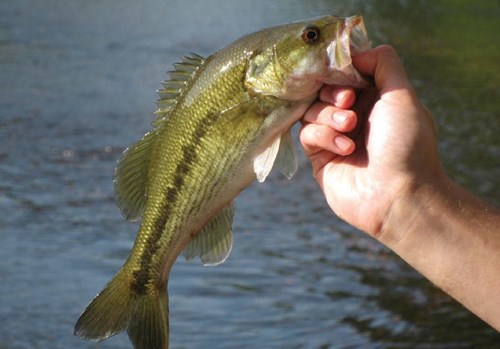 One recent creek fishing trip produced spots stuffed to the gills with crawfish, but they still bit a pumpkinseed jig fished on the bottom. That brings up another spot-ted bass characteristic: They are aggressive. When other bass quit biting, spotted bass can save the day. They fight hard for their size, but rarely jump. Stephen Brown, Coastal Fisheries Region Project Manager, reports that nearly all southern Mississippi streams and rivers have spot-ted bass. Larger streams, like Black Creek and Red Creek, are accessible with bigger boats and have larger bass (2-3 pounds). Smaller streams have more primitive ac-cess; you can “slam” with a bass boat, but a canoe or kayak increases your options. Smaller streams usually produce smaller bass, but wading wet with ultralight gear is great for summer fishing. Largemouth bass will be in larger pools in streams; spotted bass will usually be in faster water. Spotted bass are less common in northern Mississippi and are rare in the Delta because of a lack of suitable habitat. 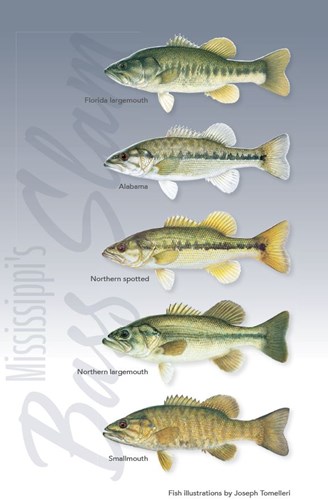 Alabama bass are native to the Mobile River drainage and are found in Mississippi in the Tennessee-Tombigbee Water-way (TTW) and its tributaries. Larry Pugh (MDWFP Chief of Staff, Fisheries) has first-hand knowledge that Bay Springs Lake is your best bet to catch Alabama bass, but reports Locks A through E are also good. You should be able to tell the Alabama and northern spotted apart from where they were caught, but the TTW connected two river systems so the species can mix. If it has over 71 lateral line scales, it is an Alabama bass. And catch-ing an Alabama bass from 3-5 pounds is not that uncommon. If you have heard of the 10-pound-plus spots from California, those are transplanted Alabama bass.

Spotted and Alabama bass are more fl ow-ing water fish than largemouths. They are found in sandy, rocky, gravelly habitat, and much of their diet is crawfish; there-fore, fish accordingly.

Smallmouth bass have vertical bars on their sides instead of a horizontal line. They are also colored differently, hence the nickname “brown bass.” They have the smallest range of Mississippi bass, being native to the Tennessee River System in the extreme northeastern part of the state. Some are caught farther down the TTW from downstream migration or tournament releases. Smallmouth size range is similar to Alabama bass.

Pickwick Lake is the “go-to” place for “smallies.” It is also one of the prettiest lakes in the state with limestone bluff s, waterfalls, and forested banks. Spring and fall are the best times to fish for small-mouths here; they are also the most scenic seasons with flowering trees or autumn leaves. With its boat ramp and marina, J.P. Coleman State Park overlooking the lake is the ideal place to stay here.

Smallmouth bass are also crawfish eaters, so fish crawfish-imitating lures around rock and/or gravel banks and bluff s. They will bite crankbaits and soft plastic lures, too. Pickwick Lake also is the only place in Mississippi where you can catch smallmouth, northern spotted, and northern largemouth bass in the same lake. Largemouths usually prowl weed edges or school over mussel beds along the old river channel, while spots are more likely to be found in the current of tributaries like Bear Creek, or on rocky banks with smallmouths.

Warning: A Mississippi Bass Slam can be addictive. You can explore the beauty and variety of the family by web search-ing “black bass diversity.”

Keith Meals is a ﬁsheries biologist for MDWFP.