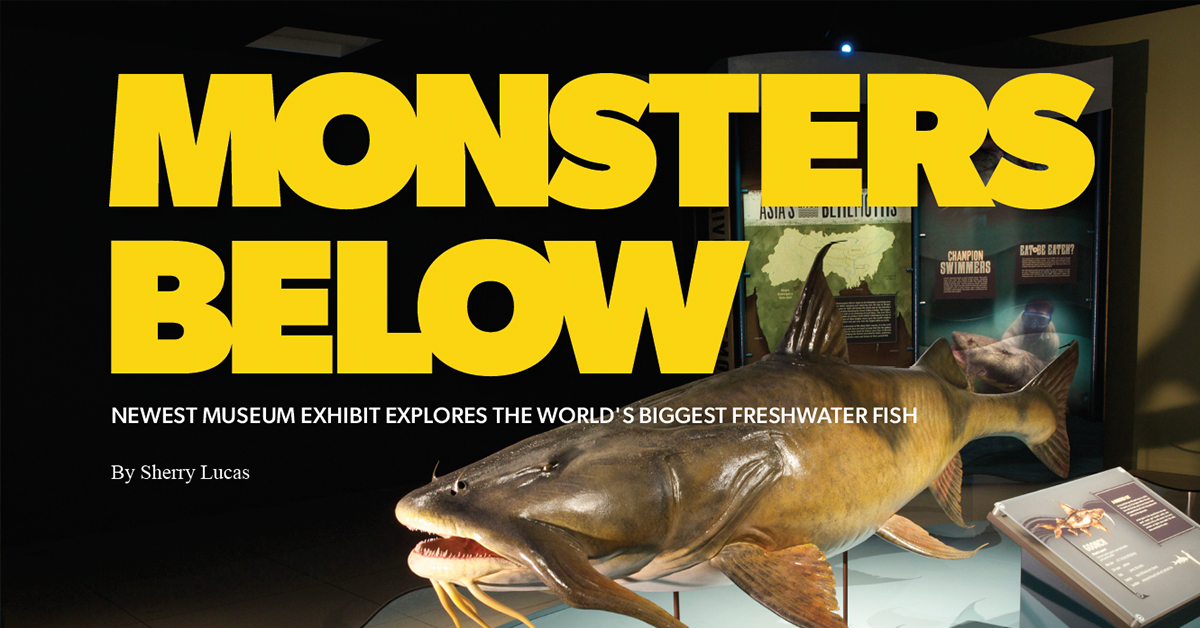 Angling for the big one? “Monster Fish: In Search of the Last River Giants” is the stuff of dreams. Very big dreams.

The large, new traveling exhibition at Mississippi Department of Wildlife, Fisheries, and Parks’ (MDWFP) Mississippi Museum of Natural Science (MMNS) sets the bait for strong showings this year with true-to-life models of the monsters lurking in the lake and river depths worldwide.

Engaging and interactive, the National Geographic exhibition first opened at its headquarters in 2015 and has traveled the United States since. It draws on the National Geographic TV channel’s “Monster Fish” show, which is part of the Nat Geo WILD series. It highlights aquatic ecologist-explorer-host Zeb Hogan’s search for these fascinating freshwater behemoths. On display May 16 through Dec. 31, “Monster Fish” is positioned to hook and reel in kids, families, students, and conservationists.

“Monster Fish” adventures span six continents, but the aquatics at its core finds natural kinship in Mississippi traditions and even the museum’s roots.

“When I think about monster fish in Mississippi, I think about alligator gar, sturgeon, and big catfish,” says museum ichthyologist Matthew Wagner. “But, from an angling perspective, I think about catching big blue cats and big flatheads, where most people catch these by hand grabbing or tight-lining for them. A lot of our biggest blue catfish come from the Mississippi River.”

The “Monster Fish” exhibit, organized by geographic areas, will take visitors on a continental tour that highlights two dozen fish species and most of the world’s major rivers in the search to find, study, and protect these aquatic giants. Five life-size and lavishly detailed models, photos, and illustrations showcase the iconic creatures and their habitats in this 6,000-square-foot display.

For this exhibition, freshwater monsters are those that grow to more than 2 meters (6½ feet) in length or more than 100 kilograms (220 pounds) in weight. Think man-sized and bigger.

“You’re going to get to see some gigantic models of fish,” says Rachel Smart, exhibit supervisor. “That in itself is going to be fascinating,” for younger kids and adults, too, to get a gander at such giants.

Sculptures of the world’s largest freshwater fish range anywhere from 7 to 20 feet in length, says Seth de Matties, National Geographic manager of traveling exhibitions. “One of them is the sawfish — it’s a little over 20 feet, actually, from Australia — and it’s a life-size model that rests on the floor and children can interact with it. You can sit on the fish. You can climb on it, which is kind of fun.” The others are displayed on podiums and include the North American paddlefish, the pirarucu, the goonch, and the giant carp.

“They’re really impressive, to see this life-size scale,” de Matties says. “Because of their size, they’re humbling, to think that these are actually freshwater fish. We all expect fish this large in the ocean, but freshwater is another perspective.”

Visitors will find out about the folklore and myths these giants inspire, the role they play in the local culture, and some of the mysteries behind these dwellers of murky depths. Videos show a sawfish’s slash-and-eat ways, a paddlefish’s filter-feeding behaviors, and the challenges of tagging a giant freshwater stingray.

For many, “Monster Fish” will “swim” into unknown territory in the world’s waterways to highlight creatures such as the colorful, air-breathing pirarucu in South America and Asia’s massive freshwater stingrays.

“There’s also a strong message about conservation and habitat loss,” Beibers says. The biggest fish, often long-lived and slow to mature, need large, healthy lakes and free-flowing rivers to grow to such sizes. With significant population declines in recent years, monster fish species are endangered. Habitat degradation and overfishing are among the primary threats.

“You don’t get the fish to fish for unless you care for the habitat, and that is so key,” says Nicole Smith, museum event planner and conservation educator. She adds that since conservation is a core value for MDWFP and the museum, “this exhibit is such a great tie-in to who we are.”

“Monster Fish” brings a splashy segue into many of the museum’s permanent draws, and its history. The museum’s core fish collection originated with pioneer conservationist and founder Fannye Cook, the force behind the creation of MDWFP and author of the state’s original fish field guide, the 1959 “Freshwater Fish in Mississippi.” The majority of tanks in the museum’s 20-aquarium system are freshwater, with about 100,000 gallons, public exhibits coordinator James Hill estimates.

MMNS even has its monster fish — a world-record alligator gar, hanging from the ceiling just to the upper left of the large Pearl River tank. Caught in a commercial fishing net at Lake Chotard, a Mississippi River oxbow, the massive fish was beyond saving. The fish exceeded 8 feet, 5 inches in length, and weighed a record-shattering 327 pounds.

“To our knowledge, at least at the time, it was the heaviest alligator gar officially documented,” says Matt Roberts, the museum’s ichthyologist at the time, 2011. In the museum, the mount has a fiberglass replica for the head, because its skull and associated structures were kept for further study, but the body is the real fish. Research determined the female fish to be at 95-plus years.

The museum’s Living Fossils and Pearl River tanks hold live junior and large fish specimens — paddlefish, lake sturgeon, alligator gar, and catfish — highlighted in “Monster Fish.” The Pearl River tank’s whopper catfish, more than 5 feet in length, does not quite meet the exhibit’s monster measurement criteria, “but it’s a big fish,” Wagner says. “You could stick your head in its mouth.”

While Hill didn’t try that in the tank during the museum’s “Dinner and a Dive” event in February, “she was coming up to me real close, checking me out,” he says. “It’s an intimidating fish.”

Sherry Lucas is a freelance writer for Mississippi Outdoors.