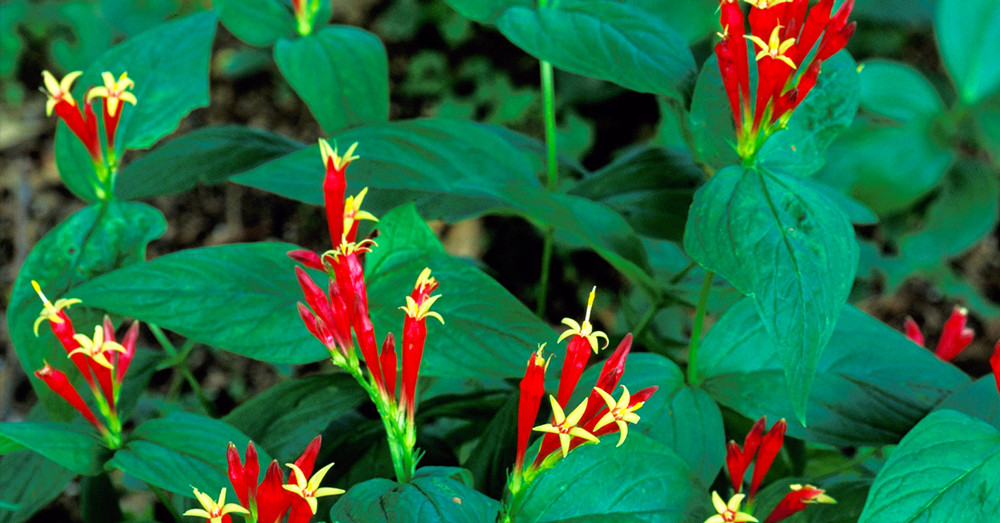 Indian pink, a plant once collected to near extinction, is one of the most attractive native plants of the southeastern United States. This hardy, clump-forming perennial grows up to 2 feet in height. The dark green leaves, which have a distinctive vein pattern, are paired opposite of each other on the stem, with the largest leaves on the mid-stem to upper reaches of the plant. The leaves are stalkless and tapered to a long point from a rounded base. They spiral on the stem to maximize the available area for photosynthesis.

Indian pinks have brilliant red, tubular flowers with a star-like apex that is a startling yellow. Bloom time is from March through June. If pollinated, the flowers are replaced by a rounded, green capsule through the summer to early fall. These capsules open by a central suture, catapulting the seeds away from the parents. Seeds germinate in the spring, sending

up their embryonic leaves once the roots have developed. Typically these plants are found in moderately moist hardwood forests in Mississippi. They are found only in the eastern United States, from Virginia to Oklahoma.

Incredibly, despite its extraordinary beauty, this plant is relatively unknown to most people. It is rarely offered for sale by native garden centers and never by the big-box stores. Those who are familiar with Indian pink take advantage of its shade tolerance to enhance their home landscapes. The popularity it has in the garden has allowed it to survive as a pass-along plant, with it being propagated by seeds or root cuttings. The seeds can be gathered by enclosing the stem with the fruit in a cloth bag to catch the projectile seeds. Removing flowers will prolong the blooming season, but remember to keep some intact to produce seed.

Seeds should be stored in a small amount of soil in a paper bag in the crisper drawer of a refrigerator during the winter months to enhance germination. In the spring, sow the seeds shallowly in 2-inch pots. Keep the plants in the containers until they are of a suitable size to plant. Indian pinks are lovely for shade to partial shade gardens. They can be planted in full sun, but the foliage will turn yellow and the plants may be stunted and have a shorter flowering period.

As would be expected, the tubular, red flowers are hummingbird magnets. Planting in drifts is the best strategy to bring in the birds. Any pollinators that like tubular flowers will also be drawn to these plants; butterflies and long-tongued bees are regular visitors. Insects and other wildlife rarely forage upon Indian pinks, mostly because of the toxicity of the whole plant. White-tailed deer have been known to browse, but the toxins contained within the plant discourage heavy herbivory.

The toxins in the plant are from an alkaloid, Spigeline, and are formed in all parts of the plant. As is the case with many poisonous plants, Indian pink toxins have been used medicinally. The Cherokees prepared a tea from the roots to treat worms and introduced the plant as a treatment for worms to the early colonists in the Southeast. A leaf tea was used to aid digestion in Appalachia. Root tea was also used to treat malaria. In 1763, Indian pink was acknowledged as a medicinal plant in medical journals.

Like many North American plants, Indian pink was taken back to Europe for landscape use. It was first used in English gardens in 1694. At this time, it was believed to be a type of honeysuckle. About 50 years later, Linnaeus assigned Indian pink to Spigelia, in honor of Adrian van der Spiegel, who is believed to be the first person to describe how to set up an herbarium.

Heather Sullivan is Heritage Botanist at the Mississippi Museum of Natural Science.