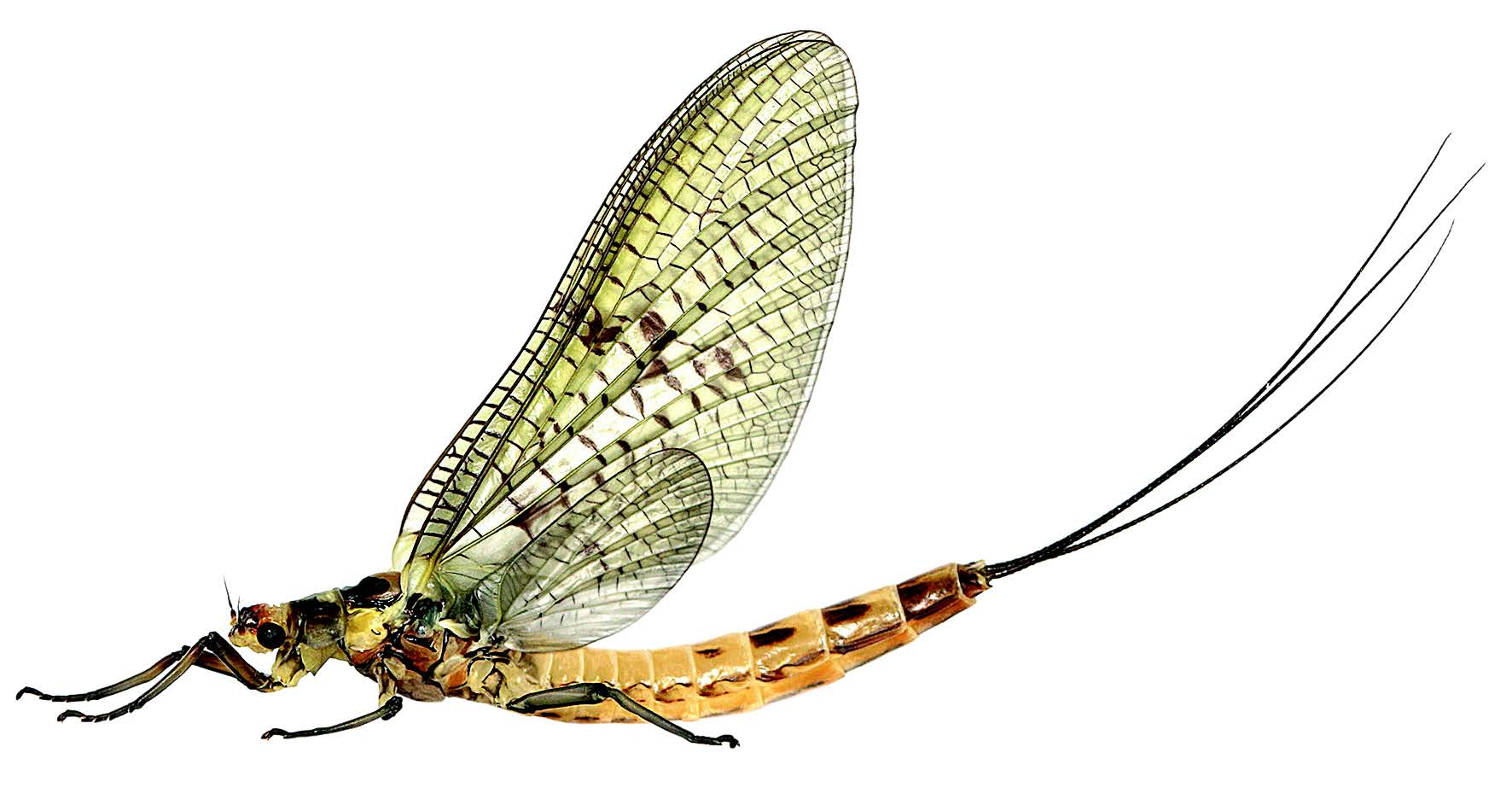 Who would think that a small creature like the mayfly could be so incredibly fascinating, significant to the environment and sportsmen, but, at times, cause such a problem? As April showers bring May flowers, they can also bring mayflies, which sometimes stick around until September. The mayfly is an insect that lives the majority of its life in an aquatic environment like a stream, river, lake, or pond. The nymph’s time in the water is spent feasting on algae and detritus (dead organic material); and some species even prey on other organisms living in this watery world. Some nymphs can remain in the water environment for up to two years. After several molts, the adult emerges from the water where it resides and lives only a day or two with the simple purpose of mating and laying eggs.

When mayflies emerge from a large body of water like the Ross Barnett Reservoir and other lakes across the state, there can be thousands of insects flying at once. As they swarm, they can obstruct a driver’s vision and make a sunny day seem dark. Home-owners have observed their house turn black with the insects at rest upon them. As the insects die, some have reported a somewhat offensive odor. All of this can be quite annoying and cause one to question what purpose the mayfly serves. Let us look at them with that question in mind.

Like the canaries used by coal miners to detect toxins in the air of mines, mayflies serve a similar purpose, sometimes even referred to as the “canaries of the streams.’’ They absorb their oxygen through the surface of their bodies and small gills attached to their abdomen. This makes them susceptible to low levels of oxygen, high level of metals, ammonia and other chemicals. Sediment or silt can also become a problem for the small mayfly nymph by blocking the transfer of oxygen through the body surface and gills. Being so susceptible to changes in the water quality makes them an excellent gauge for the presence of toxins and low oxygen levels. If the water where mayflies live is impaired, they will be affected and could become absent from the environment. If the water is free from pollutants mayflies will emerge as adults to reproduce

So, why is this important to the average Mississippian?

Mississippi has many lakes, ponds, streams, and rivers full of fish and other living creatures. Clean, fresh water means more fish for anglers, birds for birders, and nice areas for other fun water activities. The mayfly plays a vital role in the food chain by supporting abundant fish, bird, frog, and insect populations. Bass, bream, catfish, and trout often feed on mayflies in the nymph and adult stages. Female mayflies touch the water surface or skim just under it to deposit their eggs. Fly fishing mimics this process, so areas rich with mayflies can be excellent areas for fly fishing. Fly fishermen can watch for the emergence of mayflies and use “flies” that resemble the color and size of the actual insect to increase their chances of the perfect catch.

While some might not associate Mississippi with fly fishing, the state does have some excellent places to fly fish. According to an article written by Amy Gremillion from Best in Mississippi, some of the best freshwater fly fishing spots are Horseshoe Pond in West Point, Chunky River in Enterprise, Strong River in D’Lo, and the Bouie River in Hattiesburg. Mississippi Department of Wildlife, Fisheries, and Parks has helped anglers who would like to experience fly fishing for trout by stocking rainbow trout in the bank-fishing pond of Lake Lamar Bruce in Saltillo. Birders and other nature enthusiasts can also use the emergence of the mayfly in their hobbies. It can be exciting to see a swarm of mayflies dancing over the water knowing the abundance of life that lies beneath the surface.

Now, how do we spot these “canaries?” Mayflies are unique and distinguishable as nymphs. They have caudal filaments or tails (usually three that look like the letter “M”) and gills on the abdomen that sometimes look like tiny feathers. The adult mayflies have wings that glisten. The forewing is larger, triangle-shaped, and held erect. Their front legs are longer and usually held out in front of the body. They also usually have two or three filaments that they use for reproduction and balance during flight.

Even though these small creatures can be a big nuisance, they are, nonetheless, significant to the environment. Perhaps we can relish in the fact that we have clean water, fish and other animals are well fed, and the emergence is short lived.

Sabrina Cummings is an Outreach Educator in Southwest Mississippi.