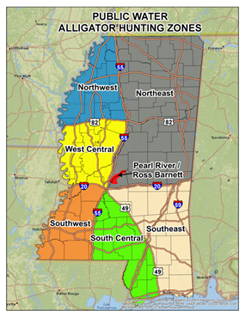 The numbers show Mississippi’s 2019 alligator season was one of the most successful on record, according to Mississippi Department of Wildlife, Fisheries, and Parks’ (MDWFP) Alligator Program Coordinator Ricky Flynt.

“The weather was absolutely perfect for the 10-day hunting season statewide,” Flynt said. “It gave hunters ample opportunity to hunt.”

“We had the highest participation ever,” Flynt said. “Public water levels were above typical levels and that allowed hunters to get to areas that have not been accessible in other years.”

Of the seven zones, the Southwest Zone had the highest number of harvested alligators (422) and tied the Southeast Zone in the length category with (13.5-foot alligators).

“Alligator hunters are selective about the alligators they keep because of the limits,” Flynt said. “Hunters are allowed two gators, and only one that is over seven feet long.”

2019 Alligator Season by the numbers