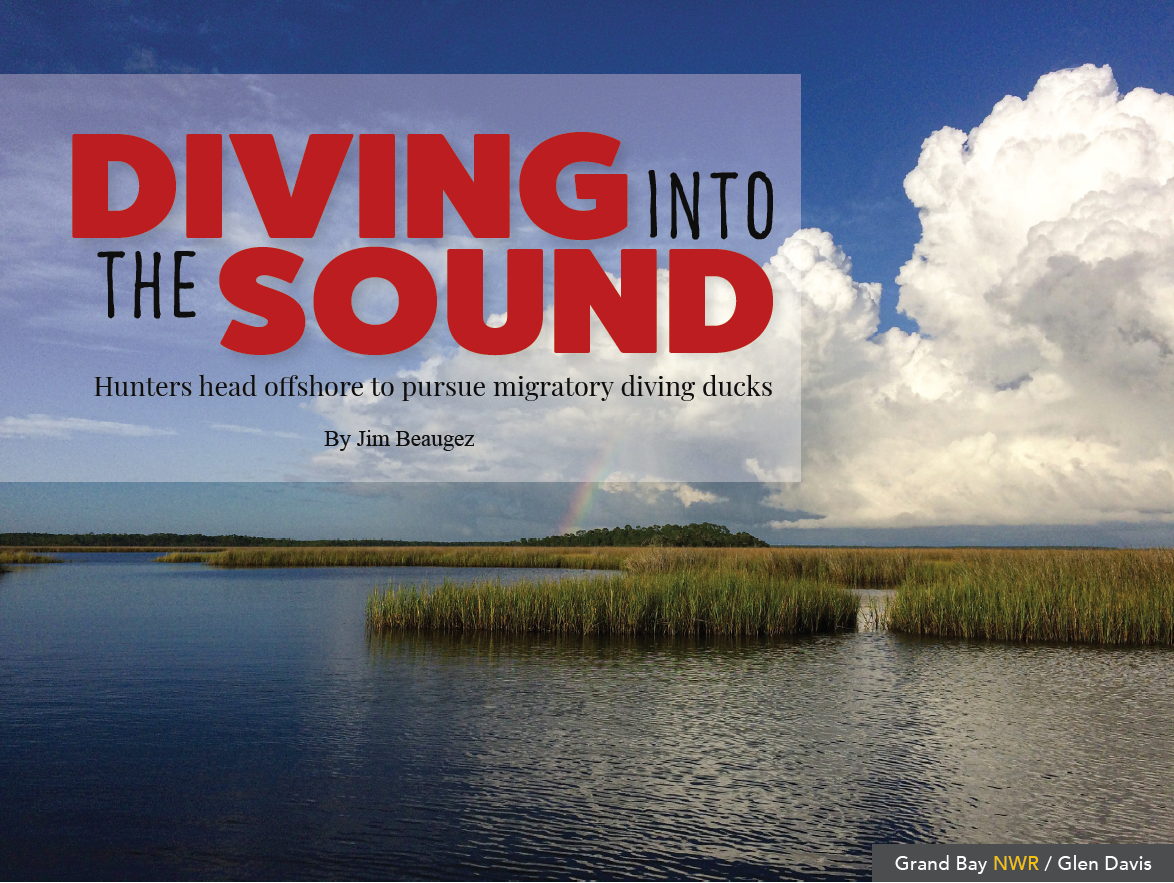 There is no question that the Delta is considered the hottest spot for duck hunting in Mississippi. An abundance of slow-moving rivers, still bayous and brakes, oxbows, impoundments, managed wetlands, and low cover create an oasis for ducks using the Mississippi Flyway to escape harsh northern winters.

But hunters who only hunt those far-inland waterways are missing the action along the Mississippi Sound, a 90-mile stretch of water between the mainland and barrier islands running from the western Louisiana marshes to Dauphin Island, Alabama.

Flanking the eastern edge of the Mississippi Flyway, which funnels millions of ducks from Canada and the Great Lakes region to their winter homes in the coastal marshes of Louisiana and Mississippi, the Mississippi Sound is a shallow body of water bordered by estuaries and dotted with submerged sandbars, grass beds, and islands barely large enough to merit a name.

That is what makes the Sound perfect for ducks, says Tommy Ware, the regional director of Ducks Unlimited for South Alabama and Mississippi. Ware grew up hunting ducks in the backwaters of the Pearl River in central Mississippi before discovering coastal duck hunting on the northern Gulf of Mexico.

While fishing for speckled trout and other local species, he noticed ducks flying overhead and heard chatter among locals about duck hunting in the coastal marshes. “Like most people do, you scout, listen to people talk, hear shooting, and go look for those places,” he remembers.

Ware began hunting green-winged teal and blue-winged teal but wanted to get offshore to chase diving ducks like scaup and redheads. “You could see these big flocks of ducks, but at the time nobody really hunted out there,” he says. “Only one guy down here would even think about guiding a duck hunt out there. For the most part, it was just occasional people going there to shoot divers.”

That is a stark contrast to a century ago when large flocks of ducks were hunted heavily just offshore in the Sound. The Migratory Bird Treaty Act of 1918 ended the practice. 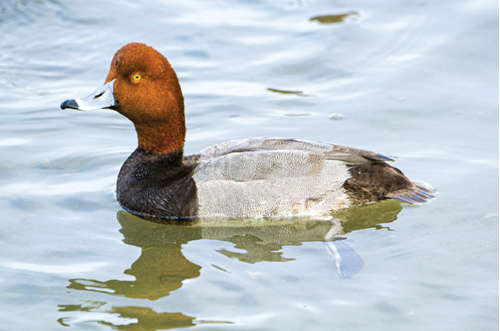 The popularity of hunting diving ducks in the Sound has grown in the last 10 years, Ware says, as hunters have begun to take note of the number of ducks wintering there. Although other areas offshore are open for duck hunting, the Grand Bay National Wildlife Refuge (GBNWR) near Pascagoula is a particularly perfect place to find them.

“During duck season, it’s actually pretty busy (here),” says James McClelland, a wildlife officer at GBNWR. “The majority of the ducks here are redheads, blue-bills (scaup), mergansers, (and) a few teal and mallards and woodies.”

In the network of marshes that form much of the refuge, hunters pursue ducks on and around islands, such as the North and South Rigolets and L’Isle Chaude. Hunters can find more action, though, about a mile or more offshore with diving ducks like redheads and scaup, Ware says, and occasionally gadwall and pintail. 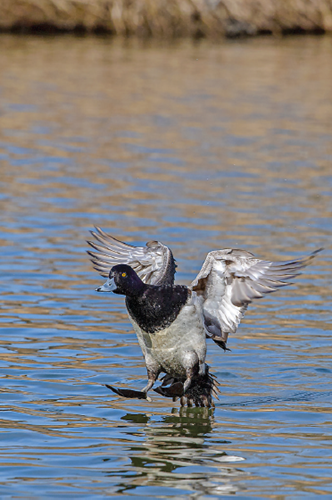 “Between the Chevron refinery and Grand Bay is really good diver hunting,” says Ware. “It’s easy to find those flats once you get out there and scout. It’s not rocket science, and those diving ducks don’t seem to be as smart as sometimes puddle ducks are. You can be standing out there waving a flag, and they’ll buzz you.”

Ware says the abundance of shallow bars offshore helps hunters attract diving ducks looking for a quick meal. Early in the season, some hunters will drop cane, pine tops, and other natural debris along these sandbars to create makeshift blinds that help attract and retain food sources.

“You could be two-and-a-half miles out and be in waist-deep water, and those bars have grass that holds shrimp and mussels and other invertebrates,” he says. “Those divers will feed on those, and they’ll come in to rest, and if you’re sitting there, you’ll have a really good hunt.”

Autumn and winter weather along the Gulf Coast can present hunters with a mixed bag of conditions on the water. “Typically if you’ve got a real bluebird day, your diver hunting is going to be first thing in the morning,” says Ware. “It’s gonna be quick and it’s gonna be over with. Most of the time you’re waiting on a crab boat to spook them and get them moving, and then they’ll see you and buzz your decoys.” 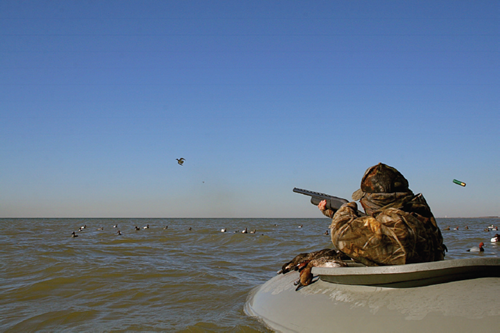 Hunting redheads in the Mississippi Sound

Some long-held traditional beliefs about duck movement and weather are not always true. The best days, he says, are usually overcast during a cold front.

“A lot of people used to say, there’s a good front coming down, you need to be ahead of it,” he says. “Well, sometimes ducks aren’t ahead of that front, they’re a day or two behind it, and they show up down here after the front comes in. So, if a good front comes in one night, (then) the next day, that afternoon, possibly that following morning, is really when you need to be sitting there to shoot those divers.”

Duck hunters along the coast also should seriously consider their boating needs before getting on the water. Duck-hunting mainstays like a typical jon boat, with a flat bottom and low sides, are not the best choice for open waters, even in the relatively calm Mississippi Sound.

Hunters who choose to get into less protected waters in a jon boat should have a clear picture of what they are getting into and what their boat can handle before leaving the slip. Also, do not push your luck, says Ware. If the wind kicks up a rough chop, it is best to cut your losses and head to protected waters. 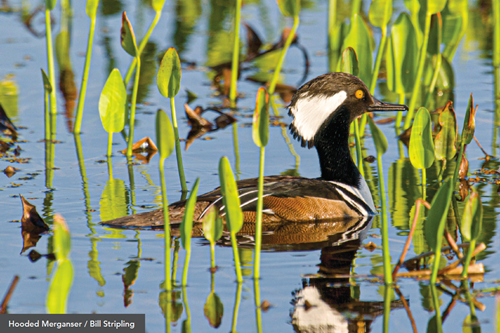 “You can get to some of those flats out there in the Sound (in a jon boat), but you have to pick your days,” says Ware. “The weather will change on you real quick. The water will get rough, especially on those shallow flats, and there’s nothing you can do. You’re gonna take on water.”

A deep-hulled, open-water boat that can anchor safely in those conditions is a better bet when dealing with unpredictable shifts in winds and weather.

“It happens every year,” he says. “Somebody goes out there, they’ll get on Grande Batture (near the Mississippi-Alabama state line) or something, the weather will get bad (and) they’re trying to come in, trying to pick decoys up. The waves are coming over in the boat, and one thing leads to another.”

There are no major financial hurdles for those interested in offshore duck hunting. Any hunter with the proper licenses and transportation can participate in the action.

“If you’re a duck hunter and you’re sitting at home and you’re aggravated because you’re not shooting ducks, you need to go out front,” says Ware. “There are ducks to be had on the whole Gulf Coast here.” 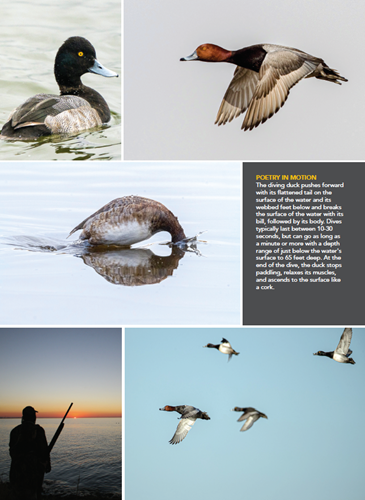