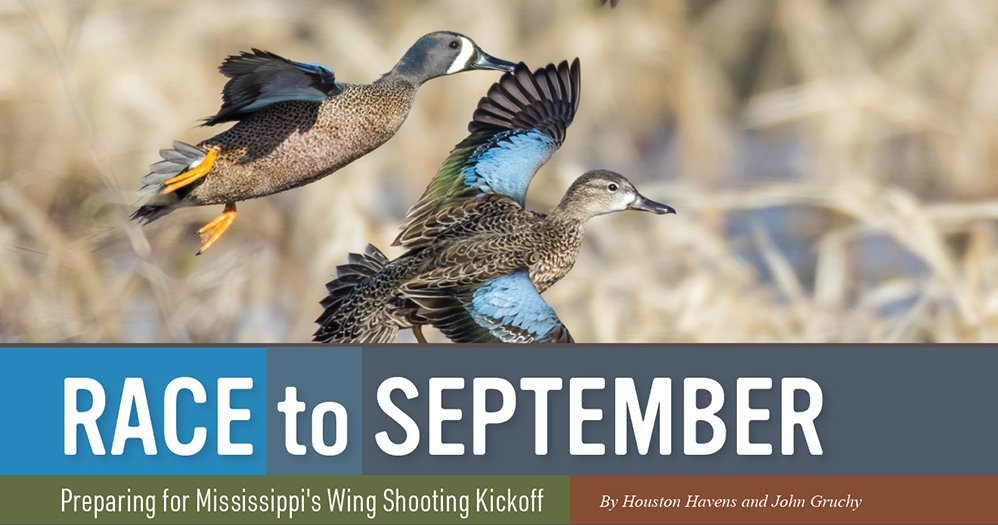 While most preparations for dove and other game bird hunting seasons begin in the spring, the dog days of summer in Mississippi still afford landowners and habitat man-agers the chance to evaluate current conditions, fine-tune their management, and learn about potential new opportunities.

As September draws near, Mississippi Department of Wildlife, Fisheries, and Parks (MDWFP) wants to help you take advantage of the abundant, early-season wing shooting the state has to offer.

For many hunters, dove season marks the beginning of the “hunting year,” and can be as much of a social gathering as it is a sporting activity. Mississippi’s dove season opens during Labor Day weekend, with both dove zones opening at 2 p.m. on Sunday, September 1. Around 90 per-cent of dove hunting activity in Mississippi occurs within the first two weeks of the season, which highlights the importance of intensive, quality management for dove hunting areas. 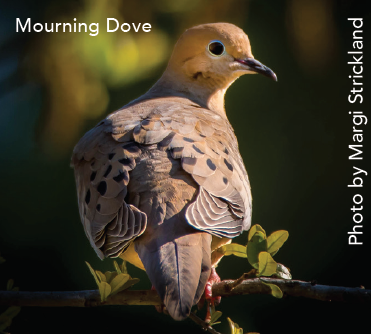 Doves prefer open habitats with bare ground where they can easily find food (primarily seeds) on the top of the ground. For dove hunting, these conditions are most often provided by the mowing of matured grain crops such as sunflowers or corn one to two weeks prior to hunting. However, since these grain crops require spring planting, some-times natural processes like droughts, floods, and wildlife depredation can limit or completely eliminate a dove field’s potential for producing a quality food source. Wildlife biologists are often asked what could be done in late summer either to salvage a failed field or to prepare a last-minute hunting area, as the race against the countdown for opening day is well underway.

One popular alternative to a failed grain planting is to replant some or all of the area in browntop millet. Browntop millet matures in about 60 days, so depending on how early you get started, you might have time to prepare a millet crop for the opening day of dove season. Even if the field will not be ready for the fall opener, the area can still be prepared for use later, during mid- or late-season hunts. Brown-top millet is relatively inexpensive, easy to grow, drought-tolerant, and it does well on most Mississippi soil types. Management options for an established stand of millet include disking strips through the standing crop, mowing and baling, and even using prescribed fire to clean the ground and expose seeds.

Management of natural vegetation is a commonly overlooked, yet easily executed method for attracting doves. Many native plants such as pigweed, croton, ragweed, and a variety of annual grasses provide seeds that are highly preferred foods for doves. Similar to manipulating a planted crop, managers must monitor natural vegetation to ensure that seeds have fully developed. After seeds are developed, managers should mow or lightly disk natural vegetation areas to scatter the seeds and provide open ground for doves to feed. Herbicides and pre-scribed fire also can be used to slow the re-growth of natural vegetation and to further clean the area for maximum seed exposure. Doves are weak scratchers,” so they prefer areas with abundant bare ground where seeds are readily available on top of the soil. A common challenge in weedy fields is providing enough bare ground so doves can forage effectively on the seeds that are available. The best method to provide bare ground is by mowing strips and/or disking.

Leaving some standing vegetation for cover is also important. For hunting areas bordered by a tree line, individual trees can be selected for herbicide injection to create dead snags for doves to sit. Alternating strips of bare ground, mowed strips, and standing vegetation is a good way to maximize bare ground, food, and cover. If a nearby water source is available, or if one can easily be provided, managing bare ground next to the water can also increase the overall attractiveness of an area for doves.

Hunters frequently ask if winter wheat plantings are a legal option for dove hunting. In Mississippi, it is currently legal to hunt doves over top-sown wheat, as long as the wheat is planted in a manner consistent with a normal agricultural practice. For example, the planting of wheat for wildlife food plots and winter grazing for livestock are considered normal agricultural practices. To be legal for hunting, wheat must be planted at a rate not to exceed 100 pounds per acre and must be evenly distributed over the planted area (not piled or clumped). One disadvantage to using wheat in dove fields is the food is available for a short period before it begins to sprout. It is not legal to continually add wheat to a planted area, so it is always preferable when possible to diversify dove field management to make food available throughout the entire hunting season.

Mississippi duck hunting in September? Absolutely. Mississippi’s 16-day early teal season is set for September 14-29. For some outdoor enthusiasts, the thought of Deep South wetlands in September can carry the bad reputation of biting insects, snakes, heat, and humidity. However, mid-September is generally the time when blue-winged teal (and some green-winged teal) enter the southern United States during their fall migration. These small, on-the-move ducks are not here for long, since they are destined to spend the majority of the winter further to the south along the Gulf Coast or even Latin America. 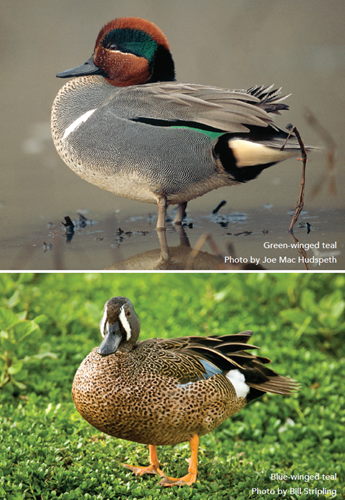 During early fall, teal prefer shallow wetland habitat with a mixture of open water, standing vegetation, and exposed mudflats around the perimeter. Shallow, managed water is often in short supply during September, so capturing rainfall through the summer or pumping ground-water into small wetland areas can be effective for attracting teal in the early fall. Early fall drawdowns of water levels in farm ponds or small lakes can also create ideal teal habitat by exposing mudflats and concentrating aquatic plants and invertebrates for food. Teal can sometimes be found using a wide variety of other wetland types such as large watershed lakes, production catfish ponds, or even cypress-tupelo brakes.

In addition to simply providing water for teal, a common, late-summer management practice for teal habitat is the creation of openings in dense natural vegetation. In Mississippi, most natural vegetation is still actively growing during early September, so some areas will require mowing, disking, or the spraying of herbicides before flooding an impoundment. Managers should consider vegetation control in strips or small patches to provide open water areas that will last through the teal hunting season. For impoundments that are already flooded during late summer, aquatic-labeled herbicides could help create openings in dense, emergent vegetation.

As Mississippi hunters begin their final preparations for the upcoming dove and teal seasons, MDWFP encourages hunters to also take notice of the other abundant migratory game bird hunting opportunities the state has to offer during the early fall. Mississippi is home to thousands of Canada geese, which remain in the local area year-round (called resident Canada geese). While a few geese can provide a natural, scenic quality to a local area, problems can quickly develop as populations begin to grow. As numbers increase, property damage can result from the consumption of vegetation (particularly around water bodies) and large quantities of fecal deposits, thus the need for a hunting season on the resident population. The September Canada goose season overlaps the teal season and the early portion of dove season, and hunters can often find opportunities to harvest all of these species in the same areas. Federal law requires non-toxic shot to be used when hunting waterfowl, so hunters should remember to use only non-toxic ammunition when hunting teal or Canada geese. 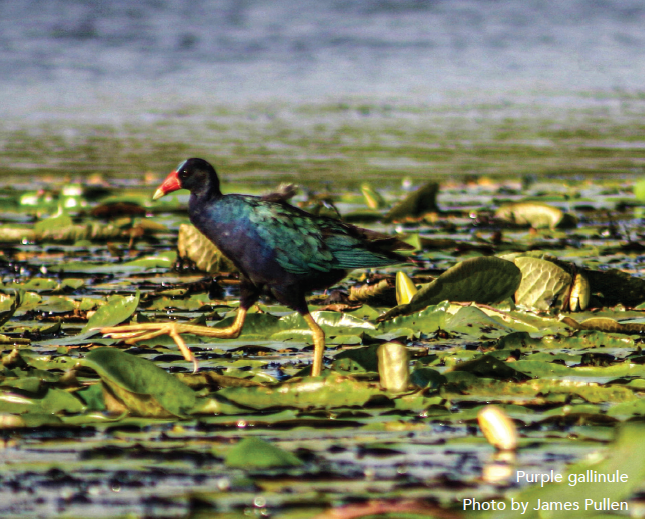 Mississippi's least known and pursued group of migratory game birds belong to the rail family. Rails and gallinules, known as “secretive marsh birds,” spend most of their time in dense vegetation near wetland edges and in emergent vegetation, such as cattails and lotus. Species legal for harvest that are commonly found in Mississippi are Virginia, clapper, and king rails, soras, and common and purple gallinules. Some of these birds can spend the entire year in Mississippi, while others migrate into and through the state in the fall.

While admittedly difficult for the novice to identify, hunters can use colors, shapes, flight patterns, and sounds to learn to identify rails and gallinules. Hunters up to the challenge of learning to identify these birds on the wing are in for some great wing-shooting opportunities. Typically, rails and gallinules are hunted by flushing them from emergent wetland vegetation, either by walking along a wetland edge or wading in wetlands. Hunters also can find birds by paddling a small boat, canoe, or pirogue, and scanning the area or listening for their calls. The hunting season for these secretive birds overlaps with the early teal season and much of the Canada goose and early dove seasons. Many of the habitats where rails and gallinules are commonly found may also be used by teal and doves along the water’s edge, providing a great opportunity to harvest multiple species on a single hunt.

Whether managing wildlife habitat or learning new ways to broaden your hunting experiences, there is still time to prepare for Mississippi’s upcoming hunting seasons. MDWFP biologists can schedule visits to private lands and provide free habitat management recommendations to landowners and managers. To learn about these services and more, visit mdwfp.com or call (601) 432-2199. Houston Havens is the Waterfowl Program Coordinator and John Gruchy is the Private Lands Program Coordinator for MDWFP.