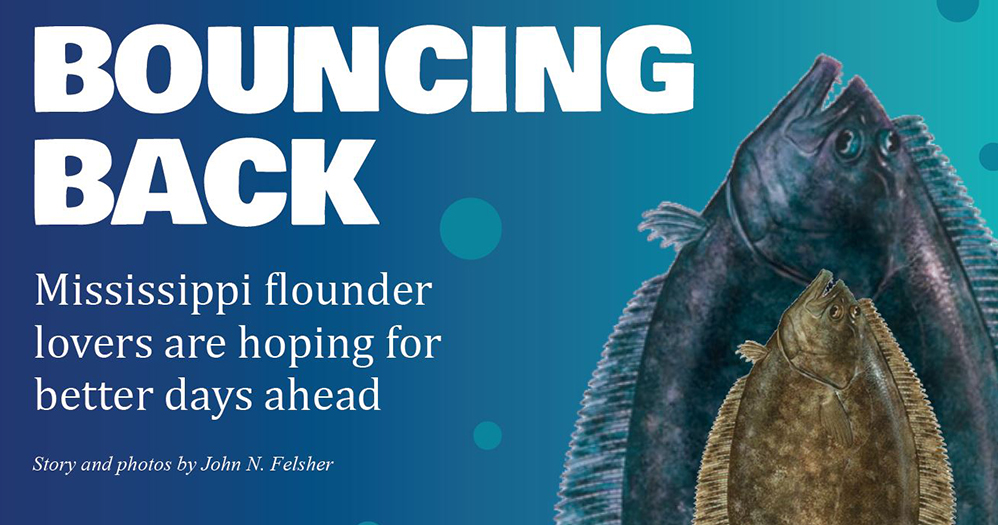 Few people enter Mississippi’s coastal waters specifically to target flounder, but nobody complains when they land one. However, for the past several years, Gulf Coast anglers who wanted to catch flounder could not find many of them.

“Mississippi and other Gulf Coast states have reported low catch numbers of flounder over the past several years,” said Jonathan Barr and Trevor Moncrief, marine fisheries biologists with the Finfish Bureau of the Mississippi Department of Marine Resources. “The low numbers of flounder reported by anglers have been observed in other neighboring states, so it doesn’t seem to be a product of overfishing, but more of an environmental cause. In 2018, we observed higher flounder landings than the previous several years and are hoping for another good year in 2019.”

In the past year or so, anglers started catching more juvenile flounder, which is a good sign. However, those who want to catch these delicious, pancake-shaped fish must first find them. Flounder often return to the same spots year after year. And people who find a decent “flounder hole” usually will keep quiet about it.

“We’re coming off a couple of years when we didn’t know what was going on with flounder,” recalled Sonny Schindler with Shore Thing Fishing Charters in Bay St. Louis. “In one day recently, I caught more flounder than I did in all of 2017. In early 2019, we saw a ton of small flounder, so that’s good news. To find flounder, we might hit several good holes and not get a bite. We might move a hundred yards away and find them stacked up like cordwood. Sometimes, we might need to make 10 or 20 casts to the exact spot before we catch one.”

Anglers might catch two flounder species in Mississippi waters. Most of them commonly catch Southern flounder, which show irregular white splotches on their brown sides. Southern flounder average about 1-3 pounds but can exceed 20 pounds. Karen A. Good set the state record (10 pounds, 4.66 ounces in 2007).

On the other hand, a Gulf flounder exhibits three oscillated black spots that resemble eyes arranged in a triangular pattern, two on either side of its lateral line and one near the base of its tail. Gulf flounder typically average less than a pound but can top 6 pounds. Kevin Sikes holds the state record for Gulf flounder (1 pound, 7.68 ounces in 2018). Both species migrate from the estuaries to the Gulf of Mexico each fall to spawn in water as deep as 200 feet and return in the spring.

“For the best flounder action, fish the estuaries between May and November,” Barr advised. “Small immature fish and some larger individuals seem to take up yearlong residency inshore and might not migrate every year, so it’s possible to catch flounder all year long. The vast majority of flounder harvested in inshore waters are female. After reaching maturity, most male flounder stay offshore for the remainder of their lives while mature females migrate in and out.”

When flounder return to the bays and marshes in the spring, look for them along shallow weedy shorelines. Focus on little coves or pockets of grass where they can use their superior splotchy brown camouflage to hide from prey. They frequently bury themselves in the muck with only their eyes protruding from the sand to look into the tidal flow. They ambush anything irresistible that flows toward them, exploding from their silty lair to snatch it. They also hide near bridge or dock pilings, jetties, sandbars and any other place that might make a good ambush spot.

“When looking for flounder, key on the mouths of bays, around pilings or areas like marsh points with strong tidal movement around them,” Barr said. “Rock jetties and piers are also excellent areas to target flounder. Some can be accessed without a boat. Fish as close to the structure as possible. These areas offer a lot of food and have varying tides, which cuts down on natural predation from larger fishes.”

Small marshy ditches and reedy points also make excellent places to catch flat-fish, especially during a falling tide. As the water level drops, minnows, shrimp and other morsels must leave their protective cover and go to deeper channels, making them easier for hungry flounder to spot and catch them. Anglers should keep these tips in mind:

People can also fish these drains in the same way with popping corks suspending either soft plastics or natural baits. Anglers should set the depth, so the bait hangs just above the bottom, cast upstream, and let the cork drift with the flow. Besides live shrimp, flounder also love to eat cocahoe minnows (also called bull or mud minnows). Fish them either on a cork or bottom rig. Flounder might even snatch pogies, other baitfish, fresh shrimp, squid, an occasional tiny crab, and sometimes cut baits. For big flounder, anglers should hook a small live mullet or croaker to a Carolina rig.

“A live bull minnow is one of the best flounder baits around,” said Mike Adams with Goin’ Coastal Charters in Ocean Springs. “I fish it on a split-shot rig with a 2/0 kahle hook. It’s like a Carolina rig, but with a smaller weight. I tie a swivel to braided mainline. On the swivel, I add a length of 20-pound fluorocarbon leader. I put the split-shot above the swivel. That way, the minnow has good opportunities to swim, move, and dart about with a lot of action. Throw it close to the points or any marsh grass and work it slowly back to the boat by just dragging it on the bottom.”

“I catch a bunch of flounder by slow-rolling spinnerbaits,” Schindler said. “I’ll just dig it across the bottom. When they want a spinnerbait, they crush it. I also use a lot of curly-tailed trailers or other soft plastics on a jighead. Barely skip that bait across the bottom. Sometimes, we’ll add just a tiny piece of cut bait—about as big as a postage stamp—to the hook for scent and flavor.” 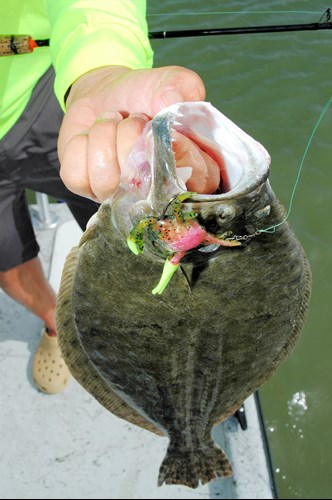 Mississippi anglers might catch flatties from the barrier islands to the river deltas like the Pearl or Pascagoula estuaries. Flounder even venture into fresh water and regularly appear in streams miles from the coast. East Pearl River marks the boundary with Louisiana and feeds a major marshy delta that extends nearly to Wave-land. Many people fish the Bayou Caddy area, marshes along the Mississippi Sound coastline and bordering Bay St. Louis.

“The shorelines along Bayou Caddy and Heron Bay are tough to beat for flounder,” Schindler said. “The marshes in the back of Bay St. Louis by the rivers are great places to fish. Even in the bays, some of the pilings in the marinas and under the bridges can hold flounder. Pay more attention to current breaks and work the eddy on the downstream side of the pilings. Flounder typically hang right out of the current line waiting for bait to wash toward them.”

Farther east, several rivers also flow into Back Bay, also called Biloxi Bay. Grassy islands and flats in the bay attract flounder. The bay also contains many dock pilings, bridges, and other structure. Many people fish the pilings under the U.S. Highway 90 bridge, old railroad trestle, and fishing piers near where the pass connects the bay to Mississippi Sound. The marshes by Old Fort Bayou near Ocean Springs can also produce good flounder action.

“People can catch flounder anywhere in the Back Bay of Biloxi,” Adams said. “I catch a lot of flounder around docks and riprap. Any docks with shell or hard bottoms around them usually hold some flounder. People can find flounder and redfish around the marshy islands from Highway 90 to the Popps Ferry Bridge. The Davis Bayou area is another good place to catch flounder. I also like to fish Graveline Bayou.”

The Pascagoula River near Pascagoula creates one of the richest estuaries on the Gulf Coast east of the Mississippi River delta. The river divides into two main channels plus numerous smaller streams, lakes, and marshy sloughs. Several grassy islands mark where the principal channels enter Pascagoula Bay. Any of these waters could produce good flounder action.

Flounder might not attract as much attention as some other species, but with anglers catching more small ones in Mississippi waters, the future looks brighter. Small fish soon turn into big fish.

John N. Felsher is a freelance writer for Mississippi Outdoors.