Hand grabbing for catfish has been around for centuries. Depending on where it is practiced, hand grabbing is known by an assortment of names, including noodling, hogging, and tickling. Some might refer to it as crazy, but in Mississippi, it is a time-honored tradition. I first learned of this fishing technique as a child listening to stories told by my family. They were usually based on big blue catfish or spotted catfish caught from the Homochitto River by my great-uncles, way before my time. One story that has been passed around our kitchen a time or two was when one of those uncles found a large water moccasin when grabbing in a log. They say he reached in, grabbed the snake, threw it up on the bank, and told his friends to kill it. Then, back under the water, he went for the catfish that was also in that log. I always assumed he caught the fish, but the story was more about the snake.

Hand grabbing for catfish is only legal in some states, primarily in the Southeast. Anglers enter the water and catch catfish with their hands from either natural or artificial structures. Yep, that is right—no hooks, no corks, no bait…just their hands. Because research associated with hand grabbing has been limited, the Mississippi Department of Wildlife, Fisheries, and Parks (MDWFP) initiated a project to learn from anglers who participate in this exciting and often misunderstood method. The project included a two-year survey of hand-grabbing anglers at Ross Barnett Reservoir.

Hand-grabbing season runs from May 1 through July 15 each year in Mississippi. This period coincides with spawning season when catfish are looking for cavities in which to spawn. Common spawning sites include hollow logs, stumps, or holes in a stream bank; however, artificial structures are also used. As with most other freshwater fish species, the male begins searching for and preparing potential spawning sites. The only parental role that a female will play is laying the eggs, and it is the male who will stay and aggressively guard the nest against predators. This aggressive behavior is what gets the adrenaline flowing for many hand-grabbing anglers.

WHAT CAN YOU EXPECT TO CATCH

Flathead catfish and blue catfish are the two most common species caught by hand grabbers, but channel catfish are also caught. Anglers tend to catch more blues earlier in the season and then start to catch flatheads as the season progresses. The most likely reasons are rising water temperatures and the preference of each species when spawning. The most sought-after catfish is the flathead (also called spotted cat, tabby cat, yellow cat, or opelousas cat). This fish has as many nicknames as the fishing technique itself. Flatheads are preferred by many anglers because they can grow to large sizes and remain great to eat, even when large. Seventy percent of the anglers interviewed during the survey said they preferred to catch flatheads.

More than 200 catfish were harvested during our survey with flathead and blue catfish accounting for 90 percent of the total catch. Hand-grabbing anglers appeared to be harvest oriented, but not size selective about their catch. Essentially, anglers harvested what they caught.

Fishing in other places may produce larger or smaller fish depending on the body of water. The fertile Big Black and Yazoo rivers are known to provide trophy-size catfish that can grow to 80 pounds or more. Fish this size are often caught and released… after a few social media photographs, of course. 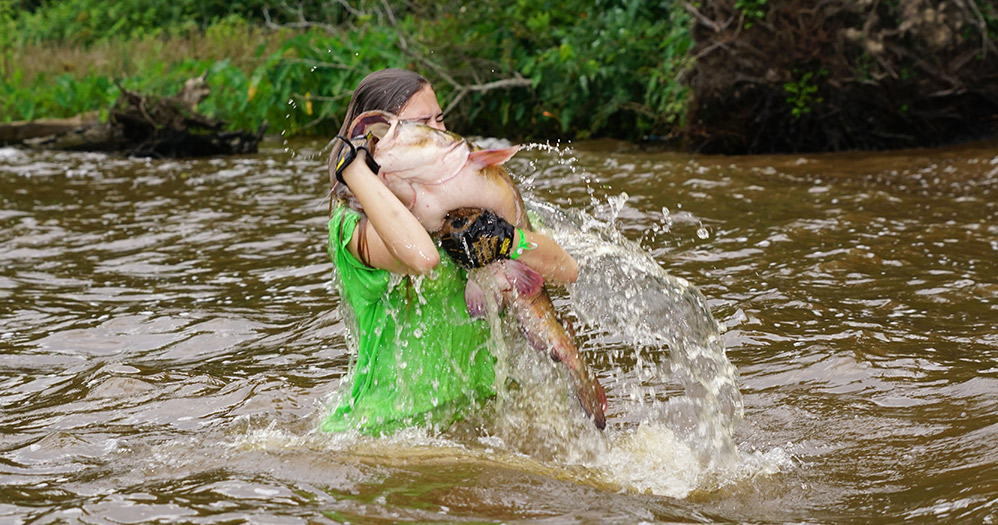 This angler is wrestling with a flathead catfish, which, along with the blue catfish, are the two most common species caught by hand grabbers. Anglers tend to find more blue catfish early in the hand-grabbing season, moving on to flatheads as the season progresses. The flathead is the most sought after of the two because they can grow to large sizes and remain great to eat, even when large.

The vast majority (95 percent) of anglers interviewed on Ross Barnett Reservoir used a probe while fishing. Probes include wooden sticks, pieces of cane, broken off fishing rods, and other items used to “poke” at the fish to make it swim toward the opening. Anglers reported that catfish were often located in the back of the box beyond arm’s length.

Some hand grabbers chose to grab barehanded, but most wore gloves. Catfish do not have actual teeth, but they have a tooth pad that is abrasive and feels like coarse sandpaper. Gloves that can provide protection to the skin and still allow the angler to feel with their hands are preferred.

Ropes can also be used when grabbing as long as they do not have an attachment. The use of grappling tongs or any hook is illegal when hand grabbing. Ropes can be used as a stringer to secure the fish before it is brought to the water’s surface. 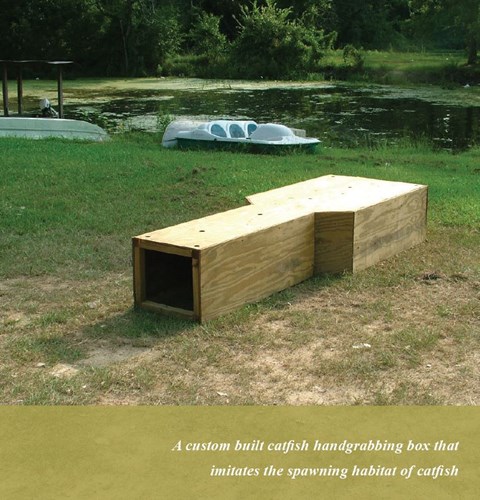 Ross Barnett is a popular destination for hand grabbers, but there are many other places across the state where it is practiced with success. Pickwick Lake and the Tennessee-Tombigbee Waterway (TTW) are popular choices in northeast Mississippi, as are the “Big 4” flood control reservoirs (Arkabutla, Enid, Sardis, and Grenada) in the north-central part of the state. Delta oxbows along the Mississippi River, along with oxbows of the Pearl and Pascagoula rivers in south Mississippi, can be great choices, depending on water levels. Okatibbee Reservoir near Meridian is another popular spot for hand grabbing.

On Ross Barnett Reservoir, hand grabbers typically were found wading in water that was between 3 and 6 feet deep. A small percentage fished in deeper water and used compressed air to breathe when doing so. Anglers often wade around in small groups to locate their submerged containers. Some use physical markers to remember where boxes are located. Others mark their spots using GPS.

Fishing in natural cavities is common in rivers and oxbow lakes where hollow logs or large cypress stumps are available. A big stump can have several exit points, so having a few friends can be handy for blocking holes to keep fish from escaping.

Anglers are allowed to place wooden, hand-grabbing boxes in public waters to imitate spawning habitat. It is unlawful to place structures such as plastic or metal barrels, hot water tanks, concrete pipe, tires, and other non-biodegradable materials in any public waters of the state. Placing artificial structures in the TTW is prohibited, and special permits might be required for other lakes or streams. Anglers must check with authorities before adding any structure to any public waters. It is unlawful to raise any part of a natural or wooden container out of the water to aid in the capture of the fish.

The size and shape of grabbing boxes can vary, but they all have common features that make acceptable sites for catfish to use. Each container requires a main opening that allows fish to enter and this is also where the person reaches in to grab the fish. The opening should allow fish to come and go freely without trapping the fish inside. The size of the catfish using the box can be dependent on the size of the box itself. The largest catfish observed during our survey was 43 inches and weighed approximately 38 pounds.

Hand grabbing for catfish appears to be a growing sport. What was once just something we heard of people doing a long time ago is now being practiced around the state. Young anglers are being taught the art of grabbing, so the tradition lives on. Several children were seen in the Ross Barnett survey learning how to grab and experiencing the excitement of being “bit” by a catfish for the first time. Hand grabbing has received wide exposure recently, including outdoor television shows, magazine articles, and videos.

Mississippi is known for having an abundant catfish population in almost any lake or stream. Anglers across the state target catfish with several different methods from rod and reels to trotlines. It is a great feeling to have a big catfish tug on your fishing line or seeing that red and white cork go under, but if you want something that will get your adrenaline pumping … then go grab you one!

Jerry Brown is the State Lake Coordinator for MDWFP.