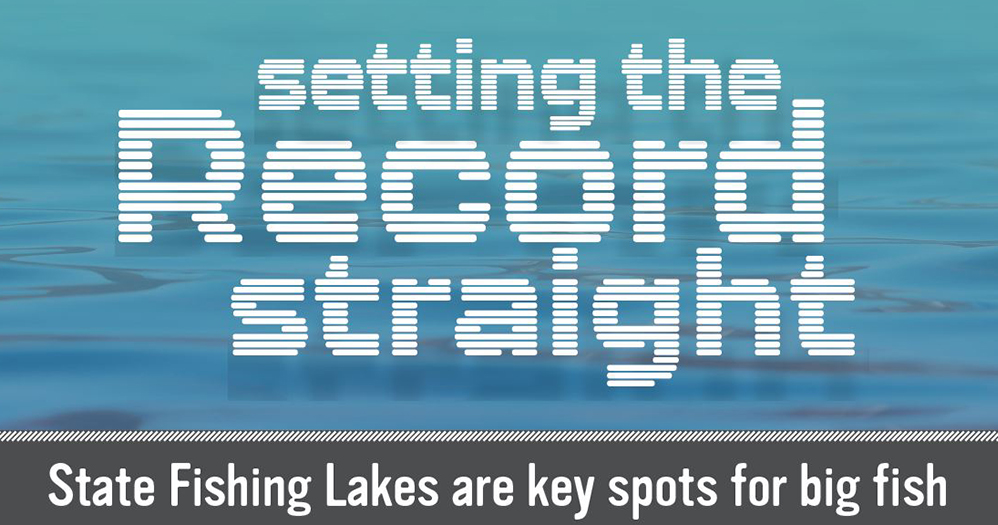 Catching a lunker involves skill, a bit of luck, and a prime location. Have you caught a big fish at one of Mississippi Department of Wildlife, Fisheries, and Parks’ (MDWFP) state fishing lakes? If so, it could be a new lake record.

MDWFP Fisheries Bureau revised the State Fishing Lake Record Fish Program in 2016 and set guidelines for fish verification. The guidelines call for a Fisheries Bureau employee (such as a lake manager, lake supervisor, or fisheries biologist) to verify the fish species and its weight. Certificates are created to acknowledge the angler’s catch; one is given to the angler and another is dis-played at the lake’s office.

At some lakes, “word of mouth” records had been listed over the years but had not been verified by staff. To be consistent and abide by the new guidelines, these records were removed, which created several open categories for lake records at state fishing lakes. 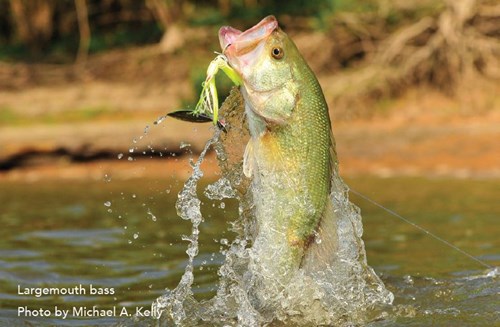 Catching a new lake record fish has become popular, even competitive, among anglers (especially at lakes that are producing big fish following a lake renovation and restocking). Part of the hype can be attributed to social media. Photo-graphs of the latest record fish often are posted on MDWFP’s Facebook page, as well as on a lake’s fishing report page. These posts have generated some of the highest numbers of “likes” and “comments” on the agency’s Facebook page.

Fish that qualify for a state fishing lake record include largemouth bass, bluegill, redear sunfish, crappie, and catfish. Crappie and catfish are not species-specific, meaning that any species of crappie (white crappie, black crappie, or Magnolia crappie) or catfish (channel catfish, blue catfish, or flathead catfish) qualifies. State fishing lake record fish are specific for a particular lake and different from state record fish. State record fish fall into three categories: rod and reel, fly rod, and trophy. The guidelines for state record fish require that the fish is weighed on certified scales, length and girth measurements are recorded, the species is verified by a MDWFP fisheries biologist, and two photos of the fish are submitted with the application.

Having your state fishing lake record fish accepted is a much simpler process. Just catch the fish and locate the lake man-ager. If the manager is unavailable, keep the fish on ice and contact the MDWFP Fisheries Bureau at (601) 432-2200 to see when someone will be available. 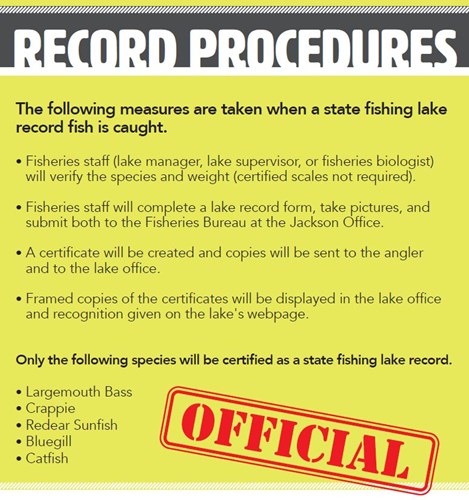 More than 60 state fishing lake record fish have been set or broken since 2016, with 30 occurring in 2018 alone. Some of the most impressive recently set records include a 12.8-pound largemouth bass from Lake Jeff Davis, a 1.35-pound redear sunfish and a 31.45-pound catfish from Lake Prentiss Walker, and a 2.75-pound crappie at Calling Panther Lake. 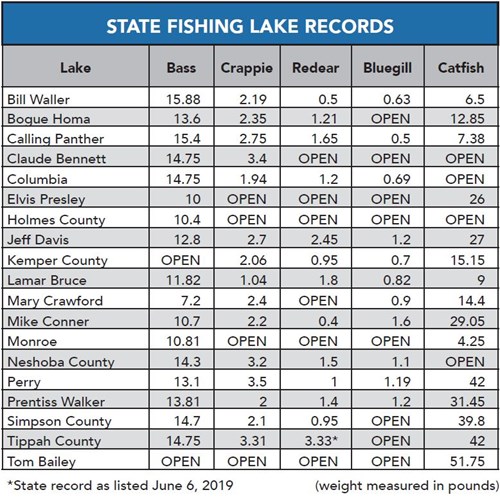 Jerry Brown is the State Lake Coordinator for MDWFP.