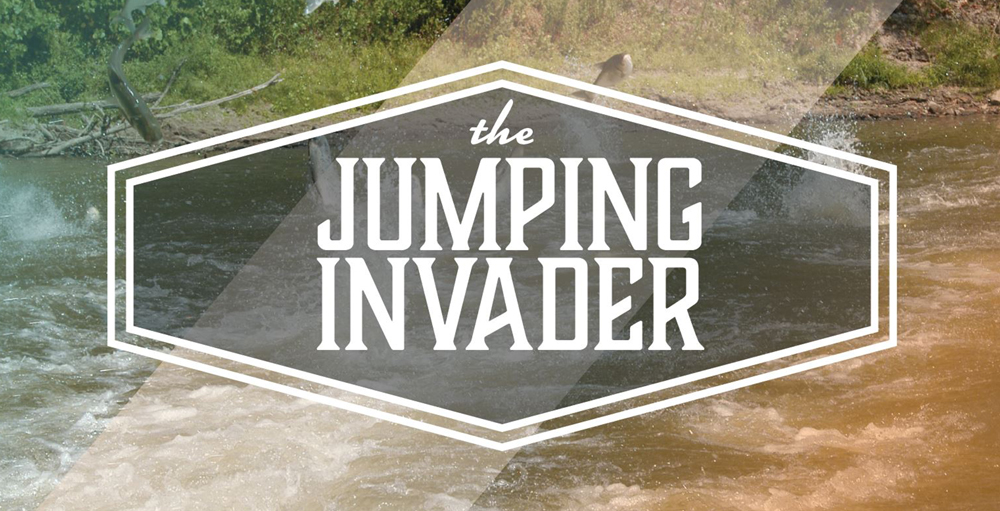 If you have boated in the waters of the Yazoo River Basin in the last two decades, you have probably had a new, unexpected — perhaps frightening — experience. Picture cruising along in a boat and suddenly several large minnow-looking fish frantically jump out of the water. Some even jump into the boat, thrash around, break fishing rods, and slime everything. You duck and dodge to avoid being hit by these flying projectiles. Your mind races as you ponder: What is going on? What are these fish? Why are they jumping? What are they doing here?

You have experienced your first memorable encounter with a non-native, invasive fish called Silver Carp, a large, silvery fish in the minnow family that is native to the Pacific drainages in eastern Asia from eastern Russia south to much of the eastern half of China. They have small scales and eyes that are set low on the sides of the head. By 2019, Silver Carp had been found in 22 states, mostly in the Mississippi River Basin and its tributaries. They were first reported from Mississippi in 1998 and are present in most of the waters of the Yazoo River Basin in addition to occurring in the Pearl River Basin, Mississippi River, Jourdan River, St. Louis Bay, Pickwick Lake, and Bay Springs Lake.

Silver Carp can reach three feet in length and weigh up to 80 pounds. They grow rapidly, reaching nearly 12 pounds in their first year of life, and they can live for 20 years. They school in open water, swim just beneath the surface, and are usually found from 1-5 meters deep in the water column. Because they tolerate a wide range of water temperatures and turbidities, they could potentially spread to all of the lower 48 states, parts of Alaska, Canada, and Mexico. They can even tolerate up to 12 parts per thousand (ppt) salinity. They mature in two to four years and produce between 314,000-4.3 million eggs, depending on body weight. They spawn near the water surface in late summer to early fall in the United States. Rising water levels and increasing water temperatures trigger spawning. Because Silver Carp eggs are semi-buoyant, they must be carried for about 60 miles by river currents ranging from 0.3-3 meters/second for several days to allow them to hatch. The eggs usually hatch in 15-50 hours depending on water temperature, with less time required to hatch in warmer water. In soft water with less than 200 parts per million (ppm) hardness, the eggs absorb water, swell, and burst before successfully hatching. 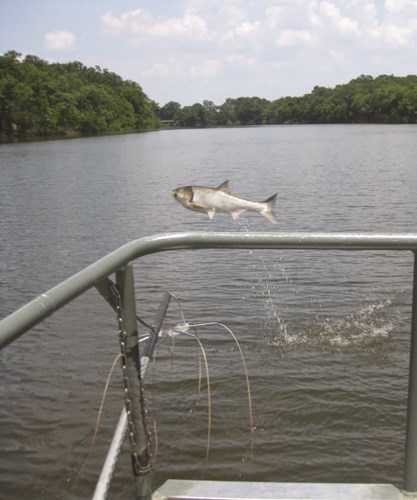 Where did they come from?

The first reported introduction of Silver Carp into the United States was by a fish farmer in Arkansas in 1973, but by March 1974, the Arkansas Game and Fish Commission had all of these fish. Universities, along with state and federal agencies, performed research on Silver Carp in the late 1970s and early 1980s. Silver Carp were stocked into sewage treatment ponds by state and city agencies and in some lakes in Arkansas to improve water quality. Limited private commercial production of Silver Carp began in 1977 in Arkansas but large quantities of Silver Carp were never raised for food in the United States because they are hard to handle and transport, stress easily, and tend to jump and avoid being captured in seines. They were never stocked into public waters in Mississippi, and only a few Mississippi fish farmers used them to improve pond water quality.

Though it is widely reported and thus commonly thought that the main reason Silver Carp are in our natural waters is that they escaped from aquaculture ponds, which were flooded in the 1990s, this is not true. Careful examination reveals that the likeliest scenario for their first occurrence in the wild was from their use and stocking by public agencies. Although the only documented introductions of Silver Carp into the wild in the United States was when they escaped from aquaculture ponds, this did not happen until 1994. By that date, they had been reported in the wild from 11 states. Other ways Silver Carp have been introduced into the wild are release from accidents involving live-haul trucks, releases from live food sales, and the transfer of wild-caught bait from waters containing Silver Carp to those where they do not yet occur.

Why do they jump?

Biologists and fish culturists might be the only ones aware that Silver Carp are swimming in our waters were it not for their jumping behavior. People started asking those same questions previously stated at the beginning of this article. Although some native fish like carp, sturgeon, gar, and mullet jump out of the water, they do so infrequently. It is thought that Silver Carp jump because they are agitated by the sounds and vibrations in the water caused by boat propellers. Higher boat speeds and specific noise levels are necessary to cause this reaction, and they usually jump after the first boat passes them. When disturbed they also swim rapidly near the surface, creating a large wake.

What effects do they have?

Silver Carp strain water to feed on plankton that forms the base of the aquatic food chain. Plankton are the small and microscopic organisms drifting or floating in the sea or freshwater, consisting chiefly of diatoms, protozoans, small crustaceans, and the eggs and larval stages of larger animals. Phytoplankton are small plants that live near the surface and use photosynthesis to produce oxygen. Zooplankton are mainly microscopic animals but are also eggs and larvae of fish and other animals. Silver Carp initially feed on zooplankton, but as they grow to two inches in length, they predominately feed on phytoplankton. Because they can feed on smaller sizes of plankton, they outcompete Bighead Carp, which is another common non-native, invasive species found in Mississippi. Through their feeding, they alter the abundance and size structure of plankton populations. By feeding on the larger plankton, smaller plankton tend to predominate and the overall plankton population can increase. 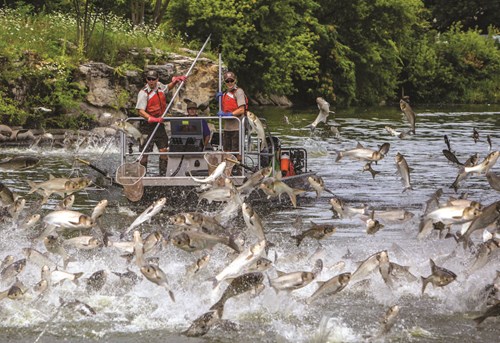 This feeding behavior can have a profound impact on aquatic food webs. Silver Carp directly compete for food resources with the young of all fish species that feed on zooplankton. Silver Carp are so efficient at feeding on plankton that throughout their lifespan they are out-competing our native plankton-feeding fish such as Gizzard Shad, Paddlefish, and Bigmouth Buffalo. When Silver Carp are present in high numbers, native larval fish may fail to survive and grow to larger sizes if zooplankton abundance is limited. Biologists examining more than 20 years of data in the upper Mississippi River found that phytoplankton abundance decreased and zooplankton abundance decreased by 90% after Silver Carp appeared in those waters. Gizzard Shad and Bigmouth Buffalo declined in abundance and weighed less. Young Paddlefish grew slower in the presence of Silver Carp. Since young Gizzard Shad are the primary food fish for most sport fish, any reduction in their abundance may slow down the growth of adult fish that prey on them.

So, what can be done to reduce the impact of Silver Carp on our aquatic ecosystems? We can take actions to limit their spread to new waters. The federal government has spent about $207 million since 2004 to construct and operate three electrical barriers in Chicago Sanitary and Ship Canal in an effort to prevent non-native, invasive species from swimming from the Mississippi River to the Great Lakes. Similar barriers with other features such as light, sound, and bubble curtains are being planned for other locations, such as shipping locks.

What can be done

One way to prevent the spread of Silver Carp and other non-native species is to stop using wild-caught live bait in any water other than where it was captured. MDWFP established a new rule to require that live bait caught in spillway areas must immediately be placed in a dry container or on ice. This is to prevent the spread of live Silver Carp to other waters since they look very similar to Threadfin Shad and Gizzard Shad, which are commonly used for bait.

The only other practical measure to limit their impact is to encourage their harvest. MDWFP has changed our rules to allow commercial fisherman to harvest non-native species, including Silver Carp, Bighead Carp, Black Carp, and Grass Carp. We are referring fisherman to an Asian Carp processing plant in Mississippi, which is buying them to export as food. This plant has bought more than 1 million pounds of Asian Carp in recent years. Harvest of Asian Carp is currently limited by the low price being paid for them and the lack of domestic markets, but overseas demands for these fish are increasing.

Sport anglers can help by harvesting Silver Carp. Bow fisherman have started shooting them. Because they lack teeth, special fishing gear must be used to catch them. They can be caught on bread or a bread paste that is flavored with unsalted butter or smelly cheese, aniseed oil or rotten bananas. This dough ball is placed around a small metal spring that is surrounded by three to four small treble hooks tied separately on 3 inches of line which are attached to the eye of the spring. This tackle is suspended below a large bobber. As fish feed on the dough ball, they are caught on the treble hooks. Silver Carp spoil easily, so they should be gutted in the field and immediately iced to remain fresh. 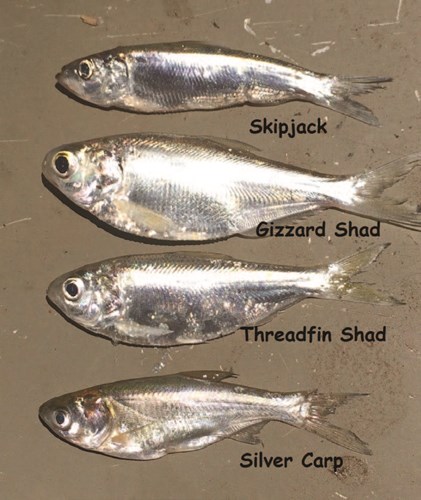 Unfortunately, Silver Carp are here to stay and we must adapt. Boaters should exercise caution in waters where Silver Carp are because they can cause physical injuries. Consider fishing for them and eating them. Considering all the adverse impacts these fish can have on our aquatic ecosystems, all of us should be extremely cautious in allowing the importation and use of any new non-native species. Let our experiences with Silver Carp teach us that prevention of such introductions is worth a pound of cure.

Dennis Riecke is a Fisheries Coordinator for MDWFP.