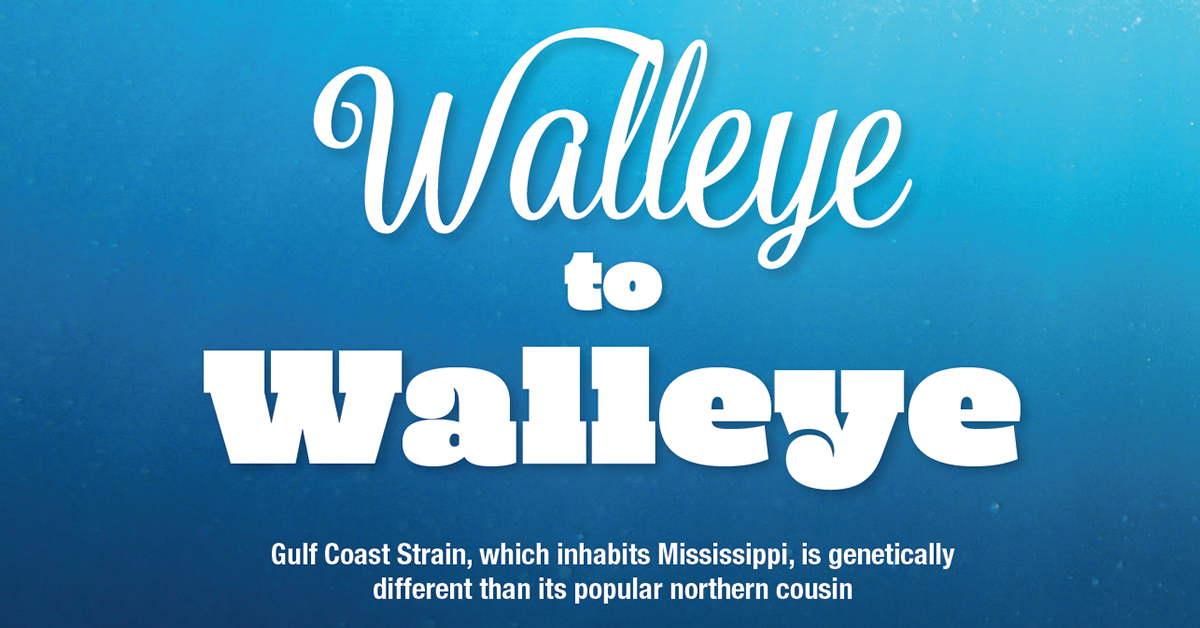 Walleye are synonymous with cold winters and cool waters, and a fish that takes to flat water to live most of its life. It takes so well to lakes that it often is stocked in reservoirs to provide great angling and among the finest of table fare.

Gulf Coast Strain (GCS) walleye are native to the Mississippi River drainage and look like their northern cousins, though there is a distinct genetic strain that only lives in the Mobile River drainage of Alabama and Mississippi. In Mississippi, they historically inhabited the Tombigbee River drainage. This area includes streams like Mackey’s and Bull Mountain creeks, the Buttahatchee, Luxapalila, and Old Tombigbee rivers as well as the small tributaries in these stream watersheds.

My experience with walleye started more than 50 years ago. Growing up, I spent my summer vacations visiting family in Thunder Bay, Ontario. Since all of my uncles and most of my aunts fished, we spent the days fishing for walleye and yellow perch — the northern equivalent of bass and bream — in places like White Fish Lake, Lac Des Mille Lacs, and the Kaministiquia River.

Fast forward to graduate school where I was surprised to hear about walleye in Alabama. How is that possible when walleye are coldwater fish? I even managed to catch a few in the spillway of Lake Tuscaloosa. A few years later I found out that there are walleye in Mississippi.

The walleye is the largest member of the perch family, aptly named because of their large, glossy eyes. These unique eyes give them excellent vision in low light conditions. Some anglers call them marble eyes, jack fish, pike, or snaggle-toothed bass.

Walleye have a long slender body with a yellow to olive color on the sides and a white belly. They have needle-sharp teeth and a distinctive white mark on the bottom tip of the tail. They are a river fish, but also will survive in lakes and ponds. In rivers, walleye occur near the bottom, where current meets calm water. This can include river bends, eddies, or structures where the current breaks. When the fish migrate upstream for spawning, they tend to concentrate below barriers such as dams or grade control structures. During the summer walleye can congregate near cool water areas provided by springs.

Walleye feed when light levels are low (dawn, dusk, and into the late evening or when the water is murky) and capture their prey with their sharp teeth. They feed on small fish such as gizzard and threadfin shad in the open water, and can also feed on crawfish and insects among the rocks.

In the spring walleye migrate up rivers and into smaller tributaries to spawn. Spawning occurs in March when water temperatures are 50-55 degrees, and usually in shallow areas with rocky substrate.

Walleye typically weigh 1-8 pounds and grow to lengths of 14-28 inches, but a few can grow to more than 30 inches and weigh more than 20 pounds. Southern walleye normally have a life span of 5-8 years, whereas in southern Canada where environmental conditions are more tolerable for walleye they may live more than 20 years.

Southern walleye prefer temperatures between 65-78 degrees, but can tolerate temperatures from 32-90 degrees. The warm water and long growing season in Mississippi help walleye grow faster, but because this is a cool-water species, they usually have a shorter life span than fish found in northern regions.

The earliest documented reports of walleye in Mississippi are found in Fannye Cook’s “Freshwater Fishes in Mississippi.” Cook, largely responsible for the founding of the agency known today as Mississippi Department of Wildlife, Fisheries, and Parks (MDWFP), listed 1,894 commercial harvests of 710 pounds from the Mississippi River and 218 pounds from Horn Lake, likely the northern strain. Walleye were also caught in the Pearl River in Madison (1935), Lawrence (1946), and Copiah counties (1948). One fish was collected from the Luxapalila River in the Tombigbee River drainage in Lowndes County in 1952. It is likely that the Pearl River fish were GCS walleye, but none have been collected that could be genetically tested.

It is unlikely that GCS walleye were ever plentiful. A 1970 report from MDWFP on walleye in the Tombigbee River found that the fish were widespread but not in high numbers. The largest concentration was the Luxapalila River. Brood fish collected from the Luxapalila were used to produce fingerlings that were stocked into the river. Follow-up surveys in the 1990s on the Luxapalila found no eggs, fry, or juvenile walleye. A few fish were collected by hook and line sampling in the early 2000s. These fish were genetically similar to the hatchery broodstock, leading to the conclusion that wild fish were extremely rare. No walleye were collected with electrofishing gear and gill nets in the Buttahatchie River, Bull Mountain Creek, and Browns Creek from 2012 to 2015.

Habitat alteration is thought to be the biggest factor contributing to the walleye’s decline. In the early to mid-1900s, channelization and flood control projects, as well as clear-cutting of stream banks, gravel mining, and other stream changes occurred. The construction of the Tennessee-Tombigbee Waterway altered the entire Tombigbee River drainage.

Sedimentation of streams is a primary issue leading to habitat loss. Several factors cause this, but the main one is eroding stream banks. Natural, undisturbed stream banks will not significantly erode, but where clear-cutting has occurred to the stream bank, or stream channels have been altered, stream banks become unstable and slide into the water. This sediment accumulates on the stream bed covering gravel spawning sites. Substantial sedimentation can also fill in deep holes that fish use to escape the summer’s heat.

Fortunately, habitat and land management practices have improved. Clear cutting up to stream banks is rare and projects to improve spawning areas along with streambank stabilization are occurring. A few years ago, MDFWP partnered with staff from the Private John Allen National Fish Hatchery to install gravel spawning beds and stabilize stream banks in Mackey’s Creek. Recently, Wildlife Mississippi purchased about 35 miles of shoreline property on the upper Buttahatchie River that will protect a large section of the GCS walleye’s habitat.

How is MDWFP helping walleye? The North Mississippi Fish Hatchery in Enid opened in 2007. One of its charges was to culture and stock GCS walleye. Each year hatchery personnel collect broodstock from MDWFP and U.S. Forest Service lakes. These lakes are used to hold broodstock rather than occupy limited hatchery space. Attempts are also made to collect brood fish from streams like the Luxapalila, Buttahatchee, and Brown’s Creek to check on the populations in these systems. The fish are brought back to the hatchery, stripped spawned, and the fry are stocked in hatchery ponds until they are an inch or two in length. They are then stocked back into the lakes and rivers like the Buttahatchee, Bull Mountain, and Old Tombigbee. 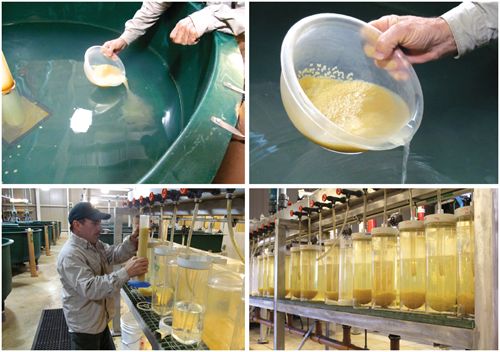 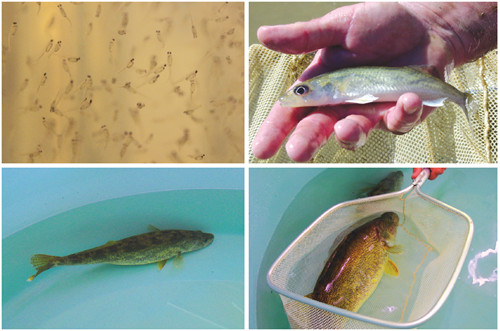 Where can you catch a walleye in Mississippi?  If you can get access, fishing streams like the Luxapalila and Buttahatchee during the late winter when the fish are spawning might prove productive. Your best bet, however, is to fish MDWFP State Lakes Monroe and Lamar Bruce, or USFS Davis Lake. You can harvest one walleye per day from Davis Lake. Walleye fishing at Monroe and Lamar Bruce, as well as the Old Tombigbee River and its tributaries, is strictly catch and release. It is our goal to increase the walleye population to the point anglers can keep a fish or two. 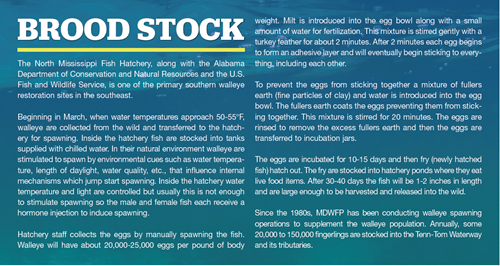