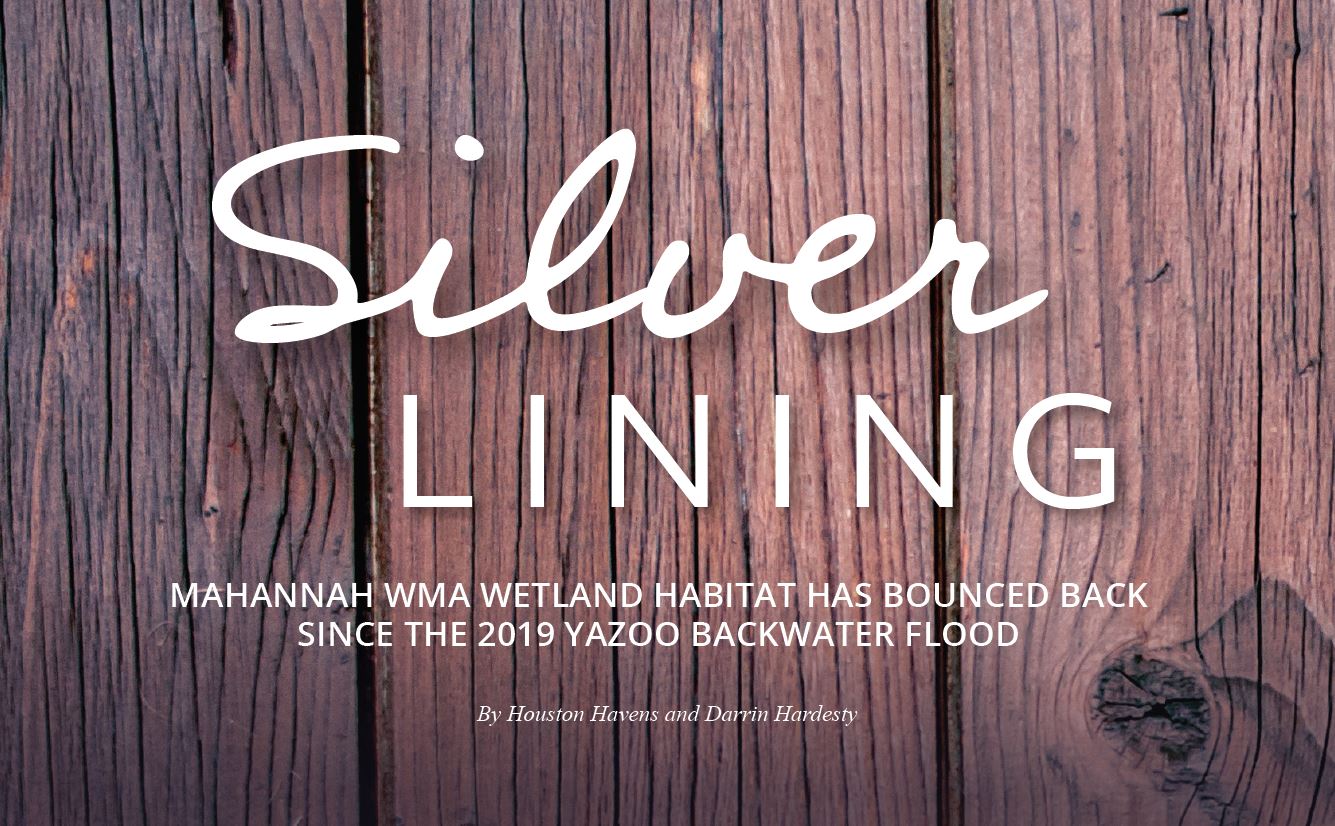 The historic Yazoo Backwater Flood of 2019 caused significant damages to personal property as well as both publicly and privately managed natural resources. A large portion of the lower Mississippi Delta region experienced flooding throughout the majority of the “growing season,” preventing most wildlife habitat management activities (and even access) until mid-August in many cases. Mahannah Wildlife Management Area (WMA) in Issaquena and Warren counties was one such area that remained inundated by floodwater for most of the spring and summer.

Most terrestrial wildlife species were either forced to leave for higher ground or became stranded as water rose and then remained for months. Also, extensive damage to wildlife habitat occurred on the WMA as the typical flush of annual, natural vegetation was unable to become established. Timber resources were damaged as trees began to break dormancy under flooded conditions. Some may have died as they were unable to tolerate the duration of the flood, while others likely will experience negative effects in the coming years. 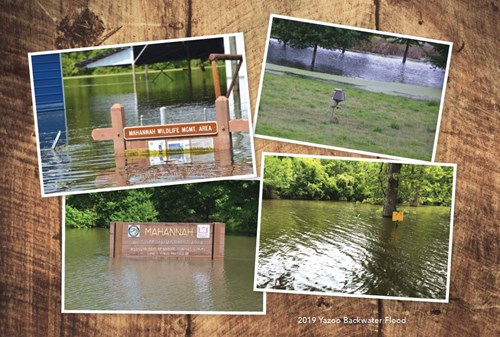 The timing and duration of any spring and summer flooding typically will change the habitat and subsequent food types that will be available for migrating waterfowl when they arrive in Mississippi for the fall and winter. Across the lower Mississippi Delta landscape, a large portion of agricultural crops that are usually flooded for wintering waterfowl was not available in 2019. With thousands of acres of cropland underwater past most normal planting dates, there was a significant reduction for some areas in the amount of corn, rice, soybeans, and other crops ducks normally feed on.

Usually, the habitat situation in this region will largely depend on what farmers are able to plant. If they are not able to get crops in the ground, then we look for natural plants to be a big part of the food source. For the 2019–20 hunting season, we knew ducks would have food, just not as much rice and soybeans.

When the 2019 floodwaters finally receded, WMA staff had a difficult decision to make: to drain wetland management impoundments and hope there was enough time to manage for waterfowl food production or to continue to hold the “free” water and take their chances with natural processes. The decision was made to hold water in most wetland impoundments because of the limited window of opportunity for them to dry up enough for equipment access, and subsequently to grow a waterfowl food source to maturity before the first frost. This option also would save money by not having to run pumps on groundwater wells as much during the fall and winter to flood impoundments. However, holding water in impoundments through the growing season typically yields more management uncertainty. If the vegetation response is not desirable, the flooded conditions greatly limit active management options. 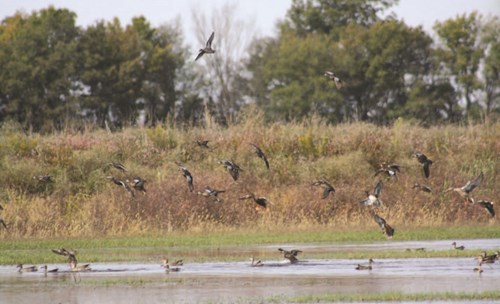 By late summer, water held in impoundments began to result in an abundance of aquatic vegetation, most of which were extremely beneficial for waterfowl. Submerged and/or floating plants, like coontail and southern naiad, became established in areas where water is typically found throughout the year. Additionally, emergent aquatic plants such as duck potato and duck salad began to appear through the surface of shallow water areas. Although these aquatic plants are quite different from the more typical, heavy seed-producing vegetation like agricultural crops or moist-soil grasses, they still provide waterfowl foods in the form of leafy vegetation, and tubers found within the root systems, as well as some seed production. 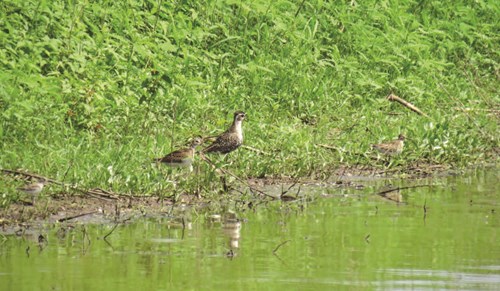 Because of the large amount of biomass produced by plants like duck potato, aquatic invertebrates are plentiful in this type of habitat. Invertebrates feed on the leaves and decaying portions of vegetation during winter. These “bugs” then provide an additional, high-protein food source for ducks and other water birds. Duck species commonly attracted to this semi-permanent, emergent marsh habitat include blue-winged teal (during early fall), gadwall, wigeon, canvasbacks, ring-necked ducks, and many others.

When the weather in late August through September turned hot and dry, water levels in Mahannah’s wetland impoundments began to slowly evaporate, leaving a “ring” of mudflats around the edges. These mudflats provided optimal conditions for the germination of late-season, moist-soil grasses (primarily sprangle-top) and a variety of sedges along wetland perimeters. This moist-soil seed production added to the WMA’s overall waterfowl food abundance and diversity.

In addition to quality waterfowl food production, holding water in late summer and early fall yielded a tremendous response from shorebirds, wading birds, and early migrating waterfowl. Late summer and early fall are typically the driest times of year in Mississippi, so providing wetland habitat during these times can be extremely beneficial to a diverse suite of wetland-dependent wildlife.

These benefits were put on display in remarkable fashion last summer and fall as numerous migratory shorebirds and wading birds made use of Mahannah’s captured floodwater. Many of these birds had likely taken advantage of the large expanse of backwater flooding in the spring and early summer, but as floodwaters receded and nature attempted to return to “normal,” the birds simply adjusted to the changes in habitat and settled on the WMA where water remained.

In the short term, the 2019 Yazoo Backwater Flood certainly created some extreme challenges, and the full effects will likely not be realized for some time. However, as with most situations in nature, there was a “silver lining” in the wetland habitat response on Mahannah WMA. Although MDWFP staff hopes to see a return to normalcy in 2020, we learned last summer that we can adapt to adverse conditions and still produce quality wetland habitat for Mississippi’s waterfowl and waterfowl hunters. 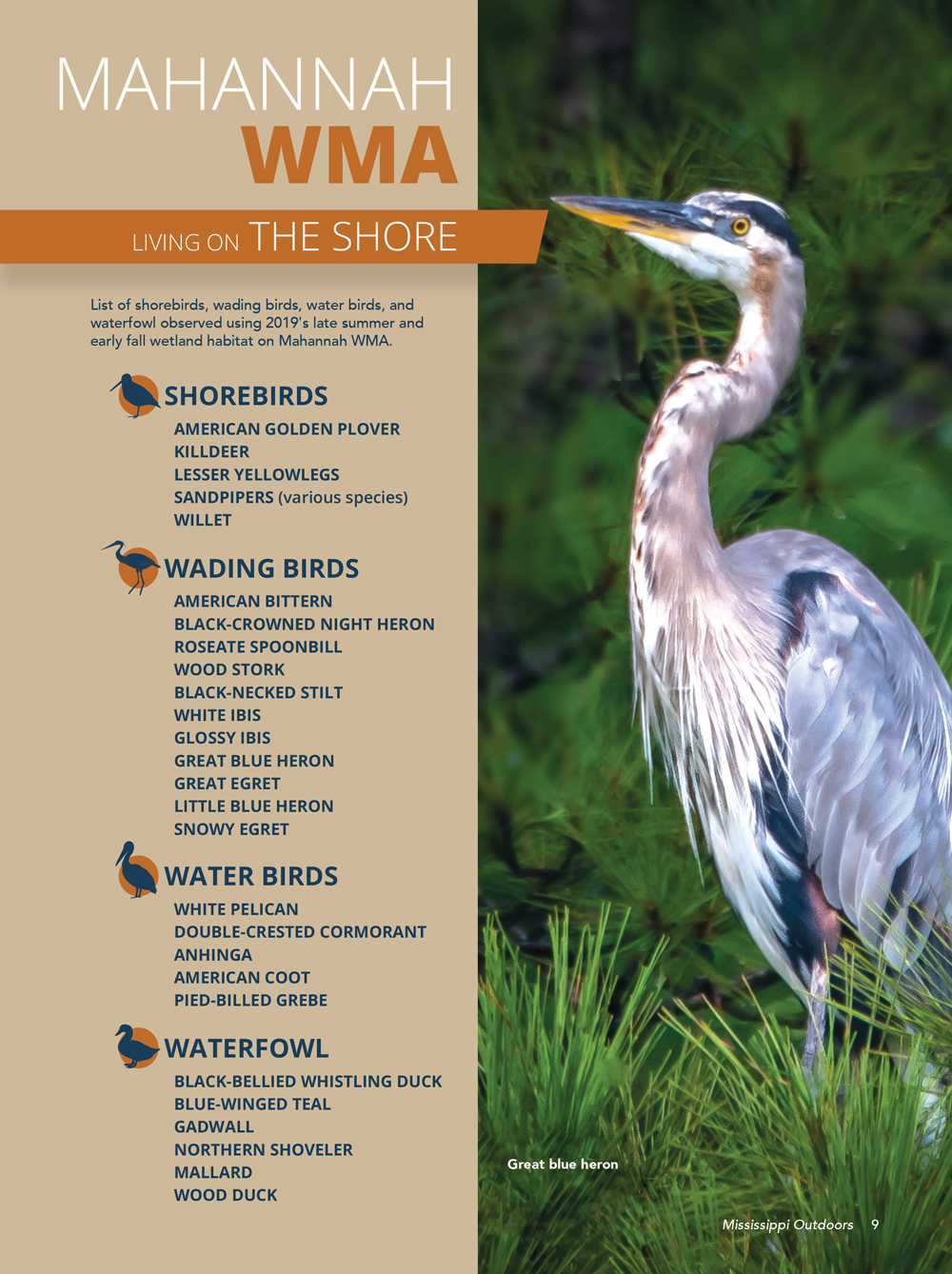