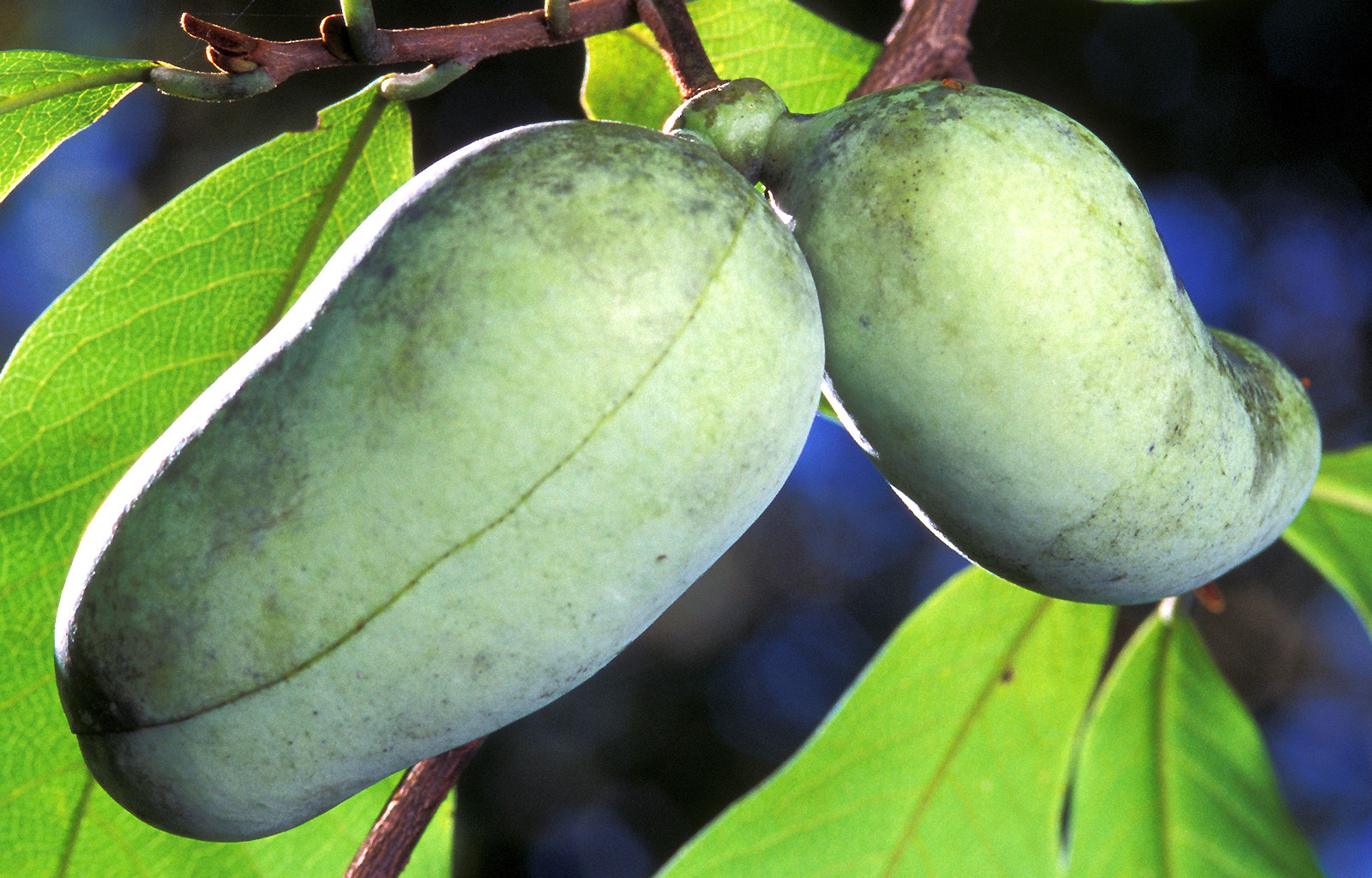 “Where, oh where, is pretty little Susie?” begins the Appalachian folk song with the answer, “Pickin’ up pawpaws…way down yonder in the pawpaw patch!” The song is about the common pawpaw, also known as the wild banana, custard apple, fetid-shrub, and hillbilly mango. It is a large shrub or small tree in the eastern United States. In Mississippi, it is limited to rich, hardwood forests throughout the state, except for southeastern Mississippi where the dwarf pawpaw thrives. Pawpaws are members of the custard apple family, which is a predominantly tropical family. Indeed, the common pawpaw foliage “looks” tropical. The leaves are large and clustered near the branch tips, giving an umbrella-like look to the plant. In deep shade, these plants form thickets and seldom flower or fruit unless a disturbance opens the canopy. Pawpaws are understory trees, reaching up to 30 feet in height.

The leaves, when crushed, have a strong odor, which is described by some like bell pepper. The fall color is a buttery yellow. A few people have a contact dermatitis reaction to the leaves and fruit. All parts of this plant, except the ripe fruit, have a toxin that discourages animals from foraging on it. The only exception is the Zebra Swallowtail, whose caterpillar exclusively eats the leaves of this plant. The toxin serves the Zebra Swallowtail as a chemical defense agent against bird predation.

Pawpaw flowers are some of the earliest animal-pollinated flowers to appear in the spring, usually in March. The exotic maroon-brown flowers measure about 2 inches wide and hang below the branches. They are pollinated by small flies and beetles that are attracted to the aroma of rotting flesh that the flowers produce.

Shortly after fertilization, a fruit cluster begins to develop into what will be the largest fruit in North America–up to 1 pound, but typically 2 to 8 ounces. Fruit reaches maturity late July through mid-September in Mississippi. Ripe fruit has yellowish-green skin and is soft and aromatic. The fruit will fall to the ground, where it is beset upon by raccoons, opossum, deer, squirrels, and occasionally box turtles. The fruit’s flesh varies by the tree, from cream to orange in color with the darker flesh having the best taste. Defining the character of the fruit is difficult. The texture is creamy like custard, and the taste is incredibly sweet and described as a mixture of pineapple, mango, banana, and cantaloupe. To eat the fruit, slice across the middle to make two “cups.” Spoon out the flesh from these cups, taking care not to eat the bitter-tasting skin or seeds. The seeds are large brown glossy flattened ovals. Pawpaw fruit contains 6 to 20 seeds. The flesh of the fruit can be frozen to save for later consumption but should never be dehydrated. The fruit keeps from two to three days at room temperature and about a week if refrigerated.

Plants will fruit best when they are on the edge of a shaded area and receive partial sunlight. Plants that grow in full sun will have fruit that can be too toxic to eat; the toxin will cause digestive distress. The seeds readily germinate after stratification and can be grown in pots in shaded areas for up to two years before being transplanted to the desired location.

Native Americans have used the fruit throughout their history. The genus Asimina is derived from the Native American term “assimin” or “rassimin.” The trees were often planted to ensure a reliable fall food source. The Cherokee used the inner bark to make ropes and string. Louisiana tribes wove the inner bark into cloth. The first written reference to pawpaws is from Hernando de Soto’s Mississippi River Valley exploration in 1541. Later, Lewis and Clark mention eating the fruit during their travels. Early European settlers made jelly and custards using the fruit, though cooking the flesh alters the taste.

Pawpaw trees produce the largest, native North American fruit. Go explore rich, hardwood forests and see if you can find the ripe fruit before the wildlife do.

Tom Mann is Zoologist of the Mississippi Natural Heritage Program at the Museum of Natural Science.