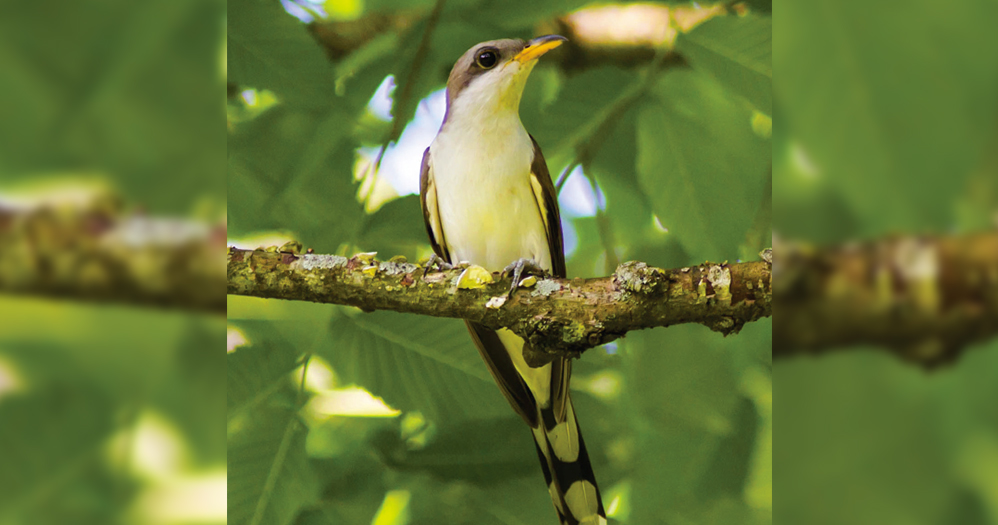 Photo by Melissa McMasters (CC BY 2.0)

The Yellow-billed Cuckoo is a species that too often is more heard than seen. Though these birds nest throughout Mississippi during the summer months, they are relatively secretive, lurk behind foliage when perched, and avoid movement while being watched. But in open woodlands, they give a distinctive call: ka-ka-ka-ka-kow-kow-kow-kow-kowlp-kowlp-kowlp.

A slender, long-tailed species, Yellow-billed Cuckoos have grayish-brown heads and upper parts while their underparts are a dull white. Outer tail feathers are broadly tipped with white, creating a striking pattern that is visible on the under-sides of the tails while perched or in flight. Also, large, reddish patches are evident in their wings while in flight. As their name suggests, their long and somewhat decurved bills are bright yellow on the lower half. Females are slightly larger than males, but gender is virtually indistinguishable.

The Yellow-billed Cuckoo is a Neotropical migratory bird species that spends the nonbreeding season mostly in South America. They begin arriving on the breeding grounds in late April to early May, which is somewhat later than some other Neotropical migratory bird species. They forage slowly, spending a lot of time perched in the treetops scanning for prey. When they spot prey, they pounce on it quickly. Foraging usually takes place in the foliage of trees, but cuckoos will sometimes zip-out after flying insects or jump on the ground to catch prey.

Their primary foods include caterpillars, katydids, cicadas, and grasshoppers. Cuckoos are among the few birds that seem to specialize in eating hairy caterpillars. The hairs collect in their stomachs and form pellets that are ultimately regurgitated. Prey are held in the bill and often hammered on a branch until they are dead. Individual birds can eat thousands of caterpillars in a season, and they may even time the onset of nesting with outbreaks of significant food items. They usually lay two to three eggs, which they will incubate for around nine to 11 days before hatching. Chicks fledge after seven to nine days. The whole cycle from the start of incubation to fledging averages about 17 days, one of the shortest for any species of bird.

Unlike some other cuckoo species that never rear their own young, Yellow-billed Cuckoos most often parasitize the other nests of Yellow-billed Cuckoos, but they also have been found to lay their eggs in at least 11 other species’ nests. Some of the most common victims are American Robins, Gray Catbirds, and Wood Thrushes. Brood parasitism can be more prevalent during breeding seasons with a higher abundance of food. So years with outbreaks of 17-year and annual cicadas, tent caterpillars, and caterpillars of other moth species will have higher rates of brood parasitism because female Yellow-billed Cuckoos produce more eggs than their nests can handle.

Though Yellow-billed Cuckoos are widely distributed across North America during the breeding season, they are generally more abundant, though in decline, in the Southeast. They have declined by such large numbers in the western United States that they are listed under the Endangered Species Act there. Breeding Bird Survey data show they are declining everywhere throughout their range. Large areas of habitat have been converted to agriculture and residential and urban development. These losses continue and are compounded every year.

Nick Winstead is an ornithologist for MDWFP’s Mississippi Museum of Natural Science.