Reports of sick and dead birds across the state of Mississippi and surrounding states are increasing, as an apparent outbreak of highly pathogenic avian influenza (HPAI) has been found in some wild birds and domestic poultry. The Mississippi Department of Wildlife, Fisheries, and Parks (MDWFP) has received many reports of sick or dead birds over the past week. MDWFP staff has assisted USDA Wildlife Services with taking samples from some of these reported birds to submit for HPAI testing, and positive cases are expected to rise when results are received. Most of the reports so far have involved sick or dead snow and Ross’s geese, but other species have also been impacted.

Avian influenza is caused by an influenza type A virus which can infect poultry (such as chickens, turkeys, pheasants, quail, domestic ducks, geese, and guinea fowl) and wild birds (especially waterfowl). The risk to humans from HPAI infections in wild birds is still considered to be low, but care should be taken to minimize risk.

The Mississippi Board of Animal Health has developed a list of HPAI Frequently Asked Questions, which can be found here: https://hpai.ms.gov/information/frequently-asked-questions/. Sick or dead birds can be reported through the contact information below. Biologists and other agency staff will determine from reports if a follow-up or sample collection is warranted, based on species affected and location.

1. Dead birds should not be handled with bare hands. Maintain a physical barrier.

2. To collect or remove dead birds from the environment:

i. Pick up the bird with doubled plastic bags that have been turned inside out.

ii. Then, invert and seal the doubled plastic bag with the bird inside.

i. Place the bag in household garbage.

ii. As an alternative, bury the dead bird (no bag) by handling the bird with a shovel. 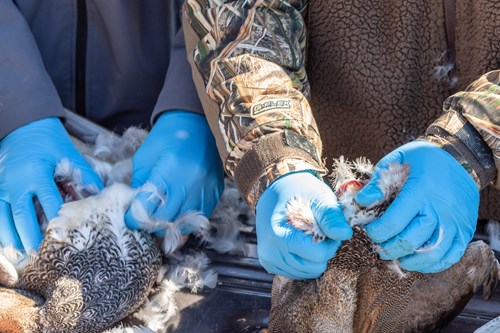