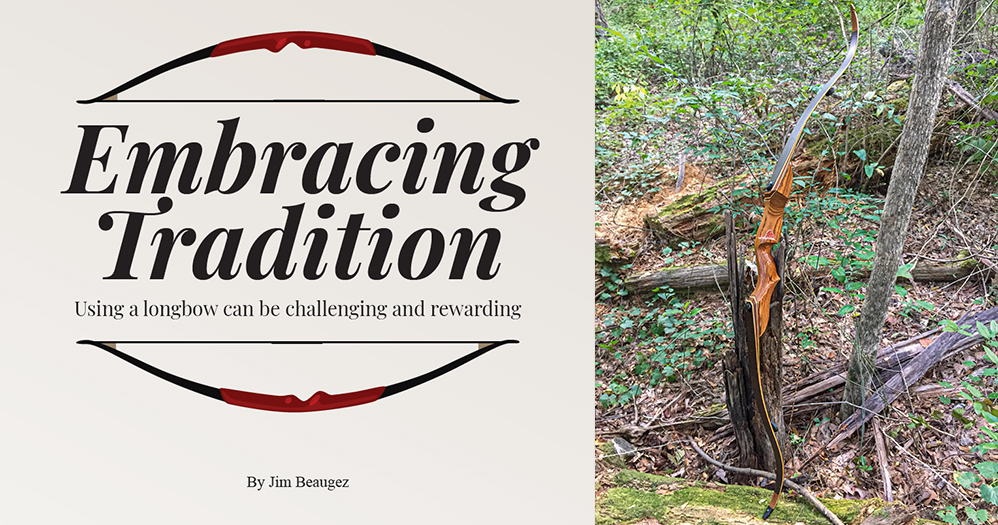 Deer hunters have a habit of losing their sense of time — and some might say their minds — when a deer walks into their crosshairs. But with the right amount of patience and a steady trigger finger, dropping a deer with a long gun is typical for many seasoned hunters.

But replace that rifle with a traditional-style bow, and everything goes out the window. Shooting a longbow demands you to keep your aim true, and it makes you responsible for maneuvering the mechanics of the shot. That combination is a tricky choreography.

Mississippi Department of Wildlife, Fisheries, and Parks private lands biologist Caleb Hinton, has learned a lot about using traditional bows on deer hunts over the last 10 years. He has faced both glory and defeat, and he has felt his muscles burn from holding an arrow in a firing position while a deer takes its time getting into range.

One day early in primitive weapon season, Hinton was seated under a white oak tree in Greene County with the Indian summer sun blazing down when a doe stepped into view perfectly broadside 15 yards away. He only needed her to ease over to a gap in the understory to get his shot, so he started to draw his bow in anticipation that she would move. When he was at a three-quarter draw, she looked directly at him.

“I held it for what seemed like an eternity at three-quarters of a draw,” he says, “which is even harder because I’m not fully locked out like I want to be. Finally, in my mind, I said, ‘OK, I’ve either got to let this bow down or complete my draw in the hope she doesn’t see me.’”

Hinton rolled the dice and finished his draw, and, despite his movement, the doe came forward that last step. He released the arrow, and she dropped 50 yards away. 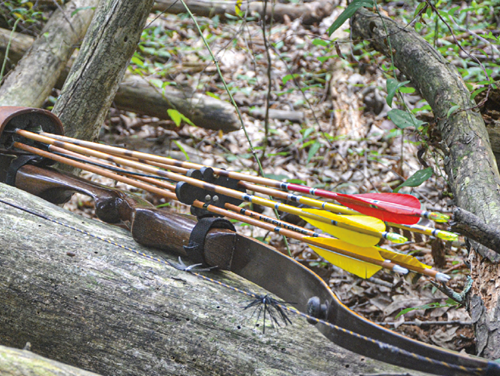 “In all honesty, it probably wasn’t much longer than 45 seconds to a minute, but it felt like an eternity and my arms were on fire.”

Hunters accustomed to compound bows will likely experience the same sensation when they move to traditional archery (deer archery season opens Oct. 1, except for the Southeast Zone, which opens Oct. 15).

“You use almost a different group of muscles when you’re shooting a longbow or recurve than using a compound,” Hinton says, “so it takes your body a while to get used to that different drawing motion. Plus, there’s no let-off like there is with a compound bow, so you have to get your back muscles even stronger to hold that full poundage of the bow the whole time.”

Hinton recommends using the rotational draw method to maintain proper form. “I never realized how important form could be when you’re shooting a stick, essentially, with no sights or anything,” he says. “It’s just the way that you draw the bow — the elbow makes a circle and rotates around your shoulder blade. It helps you engage those back muscles. I would advise anybody starting out to give that a try.”

Grasping the fundamental differences between how a compound and traditional bow works can be difficult at first. Hinton says a new world opened for him when he learned the importance of tuning his arrows to his bow. A difference as small as a quarter of an inch in arrow length can change the way the arrow flies. Tuning helps achieve a perfect arrow flight, where the arrow goes where the shooter is looking every time.

With a traditional bow, hunting becomes genuinely primitive. Hunters can choose to shoot instinctively or try another style like the gap method, in which the hunter estimates the gap distance between an arrow’s point and the target. That changes where you want to shoot from, Hinton says.

“True instinctive, to me, it’s just the most natural thing,” he says. “I tell people it’s kind of like throwing a baseball. You don’t think about aiming if you’re trying to throw a baseball and hit your buddy’s mitt. You just do it. That’s the most efficient method in a hunting situation (when) that deer or turkey comes in, and you have just a split second. And when you’re (shooting) instinctive, that’s all you need. You’re just looking at where you want to hit.”

Compound bow hunters will be tempted to match the draw weight they are used to when moving to a recurve or longbow, but Hinton cautions against the practice. He suggests starting with a much lower weight bow because weight does not transfer pound for pound. It could be common to shoot 70 pounds with a compound bow, but 70 pounds on a recurve or longbow is completely different. 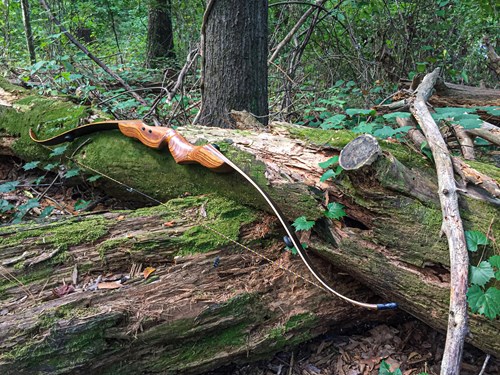 “About 50 pounds is as heavy as I would recommend somebody begin with,” he says. “For one, it’s a lot harder to control that weight. And two, you want to have a light enough weight where you learn how to properly shoot the bow. If people shoot too heavy a weight in the beginning, they get over-bowed — they develop a lot of bad habits, essentially, because they’re just trying to strain and do everything they can just to get it back and shoot. They’re not developing that proper form that they need.”

Shooting height is also a consideration. Treestand hunting is common in Mississippi and across the South, but switching bows can dramatically change the sweet spot for arc and trajectory. More specifically, hunters should reduce their height from the usual 20 to 25 feet to get a better shot. 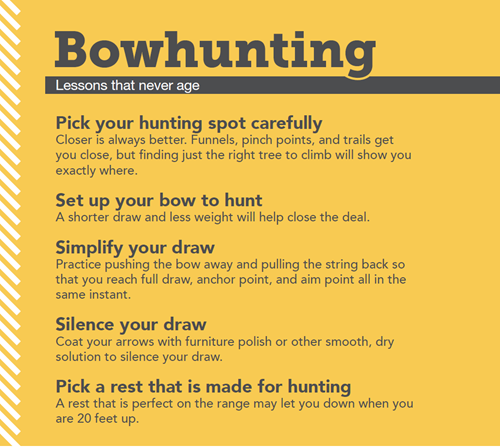 “The steeper the angle you’re shooting down at that deer, the smaller the target you have with those vitals because they’re so narrow on their back,” he says. “I like to get up about 15 to 18 feet on the tree. That way, you’re just lower and closer to the deer, and you have a lot better shot opportunity.”

Although ground shooting using natural covering to hide movement can afford prime shooting opportunities for traditional bowhunters, using a popup blind opens a new set of circumstances. Hinton recommends hunters practice shooting from various angles in the blind before attempting it on a hunt to ensure there is enough room to get a full draw in all situations.

But above all else, Hinton says, practice and patience are the most important things for people learning to shoot a traditional bow. “You’ve got to religiously practice if you want to be an efficient hunter because it just takes so much.” 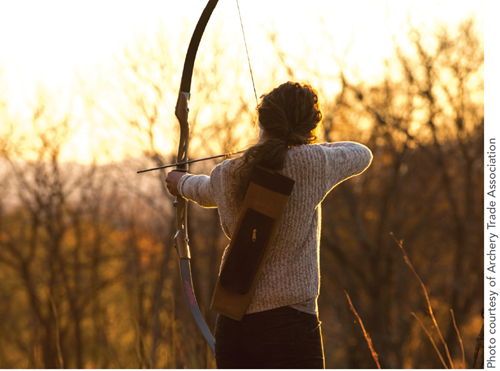