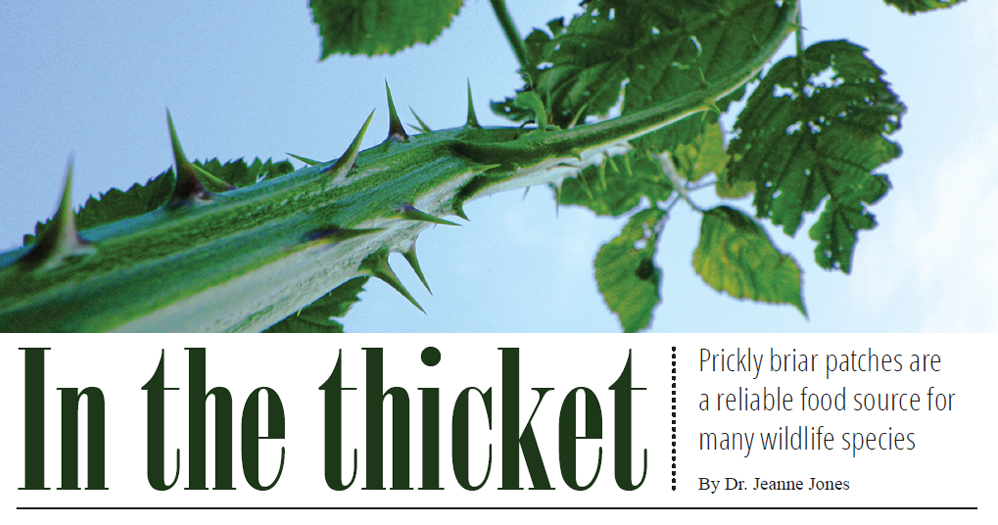 Though being thrown into a “briar patch” might be a negative implication for many humans, animals use the thickets for protection as well as a food source.

The plants that form “brambles” or briar thickets are blackberry and dewberry of the genus Rubus. About 26 Rubus species exist in the southeastern United States, with many species hybridized, therefore making species identification difficult.

Blackberry and dewberry are in the rose family and bear thorns, spines, or bristles along the stems just as wild and cultivated roses. Members of the genus Rubus grow as erect, arching, or trailing woody vines arising from perennial root crowns. Above ground growth begins in two different forms. The first, or earliest, growth form is called a primocane. The primocane grows as an unbranched large stem with large leaves that does not bear flowers or fruits. The later or older growth form, the floricane, has smaller leaves and stems, shorter stem length, and bears flowers and fruits. Over time, the floricanes of most blackberries become so numerous and entangled that they form dense thickets that seem impenetrable to us. This dense growth makes them valuable cover for wildlife.

The species’ leaves are compound, composed of three to five leaflets per leaf. In many species, the primocane exhibits five leaflets per leaf and the floricane has three leaflets per leaf. Leaves are arranged alternately on the stem and have toothed, serrated, or lobed edges. Flowers resemble wild roses, having up to five white to pinkish petals and a green to yellow center with numerous stamens and pistils (pollen-bearing and pollen-receiving flower parts). Flowers are borne in leaf and branch axils or they can occur in clusters (racemes) at the tip of floricane stems. The fruits consist of a cluster of drupelets aggregated together to form a berry. The firm, immature berries are bright red and ripen to juicy, blue-black berries during the summer months. 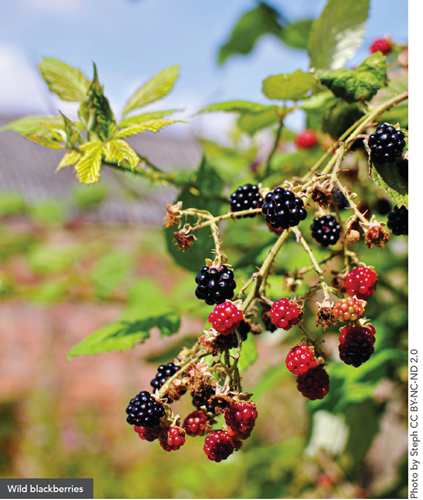 Blackberries and dewberries are early colonizing plants in harvested forest sites and abandoned fields. They frequently grow in thickets along woodland and swamp edges, utility line and gasline rights-of-way, fallow fields, and pastures. Because these berries are highly palatable to birds and mammals, they are eaten readily and the seed are then dispersed in the dining animal’s scat. The seed are extremely persistent and last for many years in the soil. They remain dormant until conditions are right for germination and establishment. You may often see blackberry plants sprouting near places where fruit-eating birds perch and conduct their daily constitution. Look for the thickets or young primocanes below powerlines, around old snags, along fencerows, or even near your bluebird nest boxes. Once established from seed, blackberries tend to persist on an area due to underground rootstocks or rhizomes.

One of the most common blackberries in the Southeast is highbush blackberry. This native blackberry forms dense thickets with spiny stems that can reach beyond 6 feet in length. Flowering in April through July, this blackberry bears berries in racemes or clusters, in axillary branches and leaves from June through August. Another species, sand blackberry, occurs with highbush blackberry on sandy, well-drained soils. This species’ stems are generally shorter than highbush blackberry and are covered with spines and dense bristles that are shed as stems age.

Two species of dewberry are also common in the Southeast: northern and southern dewberry. Dewberries generally grow as long trailing vines that are covered with dense bristles and interspersed spines. The bristles and spines are often red to reddish-purple in color and render a furry appearance to the stems. 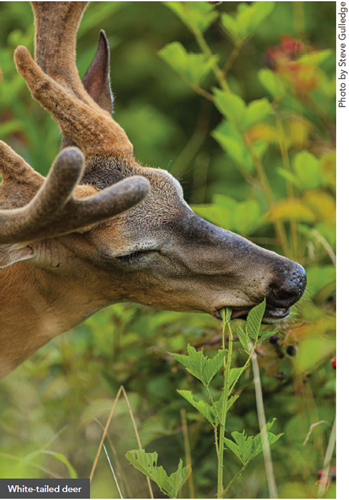 Immature red berries ripen into large succulent blackish berries by May in south Mississippi and June in north Mississippi. In general, dewberries tend to ripen earlier in the summer than do the aforementioned blackberry species. This early availability of berries becomes important to wildlife that seek early summer berries and to humans who are suffering from “deep-dish cobbler” withdrawal. Dewberries grow in dry to moist soils of open to densely shaded forests, pastures, old fields, roadsides, utility rights of way, and along edges of wetlands, streams, and swamps.

Collectively, blackberries and dewberries are one of the most important groups of plants to wildlife in the Southeast. The berries are a preferred soft mast food because of their succulence, high sugar, and vitamin content. The fruiting cycles of the native blackberries and dewberries provide wildlife with a supply of tasty and nutritious fruit from spring through late summer. Black bears, foxes, coyotes, raccoons, opossums, voles, and mice readily consume the berries. Gamebirds, songbirds, and woodpeckers all feed on the berries. Red-headed woodpeckers, bluebirds, northern cardinals, and wild turkeys are a few of the birds that are attracted to the sweet berries of the Rubus species. The pollen-rich flowers are visited by an abundance of native insects. White-tailed deer and swamp, cottontail, and marsh rabbits browse the stems readily. Blackberry thickets also provide desirable nesting sites for many species of songbirds and important escape cover for birds, rabbits, and small mammals.

Whether you favor plants of the genus Rubus for cobblers or for wildlife, there are management practices that you can implement to encourage these plants on your land. If you wish to manage blackberries and dewberries for berry production, you will want to allow floricanes to develop in your thicket. Therefore, you will want to allow the stems to grow at least two to three years. Some of the best blackberry thickets have grown for more than six years. They should be protected from frequent mowing, disking, and burning to allow for maximum berry production and an increasing thicket size for quail and songbird cover.

Fertilization can also enhance stem growth and fruit production. Fertilizers, such as 6-8-8, will favor fruit production and root development. Application rates will depend on the fertility of your site and should be based on soil fertility analysis. On highly fertile sites rates as low as 50 pounds per acre will stimulate growth and berry production, whereas lower fertility sites might require up to 300 pounds per acre of a 6-8-8 fertilizer. Because these are native plants that grow readily on low fertility sites, they typically require less fertilizer than cultivated varieties.

After blackberries have a well-established root-stock, they sprout readily following burning. In pine or grassland habitats, burning at three- to four-year intervals will create succulent browse for deer and rabbits and berries for many wildlife species. 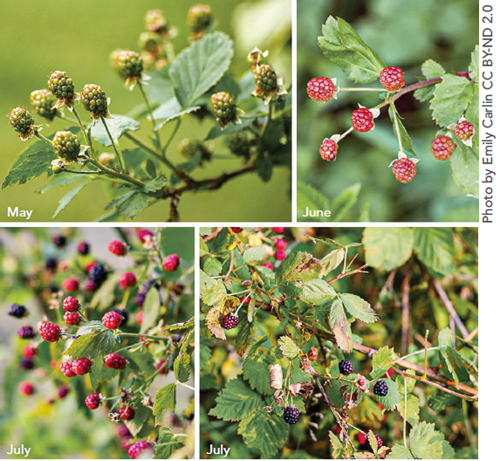 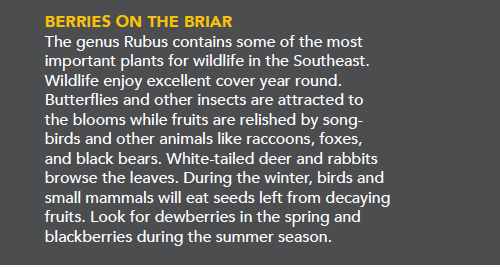 Generally, the common Rubus species colonize openings readily and there is no need to plant them. However, if you wish to introduce them to an area, you can do so by planting dried, scarified seed or root sections. Root sections can be purchased commercially or collected from a donor site during winter dormancy. They should be kept in a cool place and planted immediately. Trim above ground growth before planting to allow for root development. Sites that might be good donor sites include areas that are scheduled for urban development, paving, or mining. Always seek permission before digging plants. You might simply wish to depend on the creatures that eat the berries and deposit the seed – the bluebirds and robins as they perch on your fence or nest box posts or the small mammals as they scurry among brush piles that you have created along woodland edges.

Wildlife biologists throughout the Southeast have ranked, by preference and/or importance, various herbaceous foods that are eaten by deer for several decades. Rubus species have ranked from low to high as a food source in these surveys. Most of the survey results have been a product of the subjective opinion from biologists completing the survey.

However, several factors have logically impacted these rankings. When these factors are understood, there is consistency within the compiled results.

Two products of blackberry and dewberry plants are utilized by deer – the berries and young tender leaves. Subsequently, the ratings of both of these plants vary according to season. Beginning with dewberry in the late spring and continuing into mid-summer with blackberry, deer regularly enjoy the fruit of these Rubus species. While conducting deer food habit studies in the spring and summer, we have found berries in all stages of growth within deer’s rumens (stomachs) in Mississippi. They eat the berries ripe, green, or dried. As a result of the desire for these berries, biologists rank the Rubus species medium to high as a deer food in the spring-summer.

Deer also eat the “new growth,” or young tender leaves of Rubus species. Dewberry seems to be preferred over blackberry in all seasons. Particularly during the mid to late summer, blackberry leaves become less palatable and are rarely seen browsed in any locations.

Dr. Jeanne Jones is Professor Emeritus of the Department of Wildlife, Fisheries, and Aquaculture at Mississippi State University. 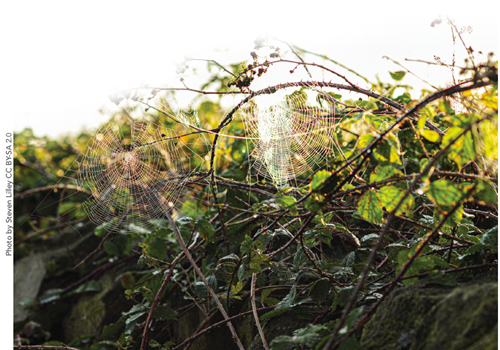