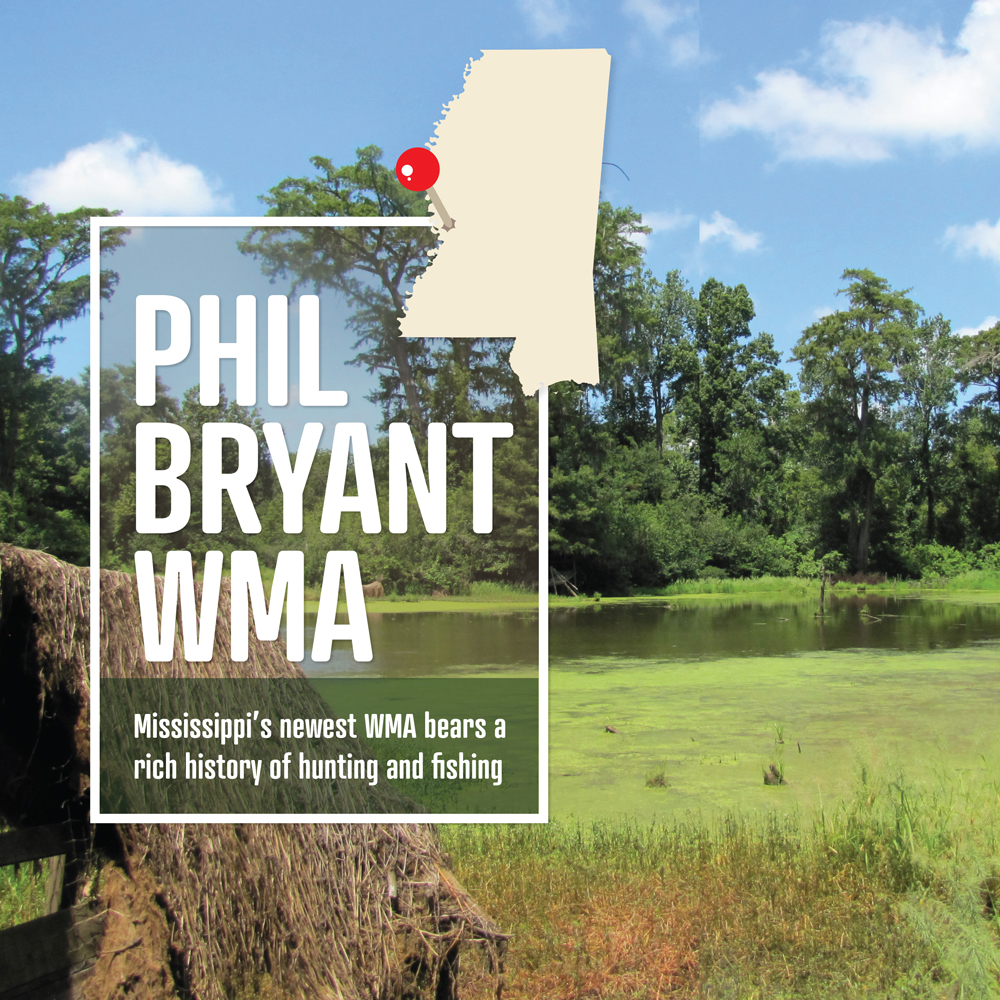 Watching the sun break the horizon from a hardwood forest in the Mississippi Delta is a special experience. In a quiet moment, while leaning against a towering Nuttall oak, one can almost feel the rich diversity of wildlife, plants, and trees of this unique region. A moment more, and you can visualize the hunting and fishing stories from the past.

The Mississippi River Alluvial Plain is a nearly 24 million-acre region with bottomland hardwood forest as the dominant natural plant community. Backwater and headwater flooding over time sculpted a landscape of ridges, swales, and oxbow lakes. Differences in elevation of only a few inches to a few feet can result in noticeable differences in hydrology and plant communities. This diversity of forests and wetland habitats provides suitable conditions for a wide array of wildlife species.

The productive soil of the Mississippi River floodplain is also highly suitable for agricultural production. As such, the last century has witnessed extensive clearing of bottomland forests to make way for large-scale farming. The biggest remnants of the once vast expanse of bottomland forests were primarily kept intact as national forests and wildlife refuges. However, some private holdings are more substantial and provide critical areas for wildlife species dependent on bottomland systems.

Mississippi Department of Wildlife, Fisheries, and Parks (MDWFP), in partnership with The Nature Conservancy (TNC) and U.S. Fish and Wildlife Service through Federal Aid in Wildlife Restoration, purchased one of those holdings in 2018. The purchase included approximately 18,000 acres in Issaquena and Warren counties from Anderson-Tully Company (ATCO). The land, which is managed by MDWFP, becomes the newest Wildlife Management Area (WMA) and has been named after Mississippi Gov. Phil Bryant. The property, a matrix of bayous, cypress sloughs, and well-managed bottomland hardwoods, is open for the 2019–2020 hunting season. The Mississippi WMA system is expansive and diverse. It includes 55 areas encompassing more than 685,000 acres. WMAs occur across the eight major physiographic regions of the state, stretching all the way from the lower reaches of the Appalachians in Tishomingo County to the upper edge of the coastal marshes in Jackson County. They range from the rolling hardwood hills of southwestern Mississippi to the deep, rich soils of the Delta. The common link among all WMAs is that they provide habitat for wildlife, game and nongame species alike.

At Phil Bryant WMA, MDWFP fully recognizes the significance of maintaining an intact bottomland hardwood forest in perpetuity for the benefit of many wildlife species. History records indicate Teddy Roosevelt harvested a black bear in this area. This WMA will be vital in maintaining a long legacy of outdoor recreation for sportsmen and women. Thus, as with hunters in the past, we hope you will also traverse these woodlands and experience the abundance of the Mississippi Delta.

When most Mississippians think of our WMAs, they think of them primarily as public hunting areas. In fact, public hunting does constitute the largest single use of WMAs. Phil Bryant WMA will offer an array of recreational opportunities for sportsmen and women. It has been divided into four units based on accessibility and geographical features (Buck Bayou, Ten Point, Goose Lake, and Backwoods). For hunters, there will be unique opportunities not previously offered on other WMAs.

From October–January, groups of hunters (such as fathers and sons) will be drawn for a specific hunting unit. For five days, they can camp and hunt any game species that are in season.

From Dec. 26–Jan. 12 on the Ten Point Unit, draw hunts will be conducted for youth and handicapped hunters. This hunt will be during the peak of the rut and provide an exciting hunting opportunity.

The Buck Bayou Unit will be included in the Mahannah WMA draw hunt system. These areas are a combination of moist soil impoundments and flooded timber, providing a quality waterfowl hunting experience. Other WMA units will offer open waterfowl hunting on specific days.

The Goose Lake Unit, accessible only by boat or foot, will have archery-only draw hunts throughout the season. This unit offers a unique hunting experience for those wanting to get off the beaten path. ATCO, which was founded in Benton Harbor, Michigan, in 1889, began acquiring timberlands in the lower Mississippi River Valley to supply quality hardwood lumber. In 1899, ATCO purchased the Vicksburg Box Company plant in Warren County, allowing efficient rafting of logs down the river to the sawmill. In 1916, ATCO began its purchase of timberlands in the Vicksburg area and acquisitions would continue over the next 80 years.

Since 1898, the company’s management practices and land protection efforts forged this ownership into some of the most productive timberlands and associated wildlife habitats found in the lower Mississippi River Valley. From 1946 until 1980, ATCO’s staff was also charged with wildlife management responsibilities, which primarily included the administration of hunting leases and the resolution of any related problems. In recent years, however, wildlife and habitat management on company lands have received increased emphasis. In 1980, ATCO developed an aggressive, long-range wildlife program for company lands and added to the Forestry Department its first full-time wildlife biologist. This program was designed to provide for optimum wildlife populations and associated habitat, maximize recreational opportunity, develop recreational values, protect environmental quality, and promote stewardship of the company’s natural resources. The stated objective of The Habitat, the ATCO newsletter, sums up the company's commitment to wildlife management on its lands: “While pledging our interest in and support of you, we ask that you pledge your efforts as sportsmen; that together we can successfully address the management, conservation, and stewardship of the natural resources with which we are so richly blessed.”

Hunting on company lands was far different in the early 1900s than it is today. Most lands were open for public use, and verbal or written permission to hunt or fish was rarely sought or even required. Accessibility to ATCO land to hunt or fish was a primary obstacle, as roads to and from prime bottomland areas were almost nonexistent. A commonly used method of traveling to an area to hunt was to catch a ride on a paddlewheel steamboat. The boat would drop the hunting party members at a known point and pick them up on their return trip 3–10 days later.

These lands were prime for wildlife and thus bore a heritage of hunting and fishing that has left a marked impression on Mississippi’s history.

Following the demise of Prentiss, Mississippi, during the Civil War, the predominately agricultural landscape began to revert to woodlands, and many game species were hunted to low numbers. In the early 1920s, a local group of citizens started an annual trip to deer hunt in what was called the “South Country.” This area was located in Issaquena County between Rolling Fork and Vicksburg. Over time, this group would no longer travel south, but instead, rebuild what is now the present-day Merigold Hunting Club near Cleveland.

The “South Country” would then be hunted by Vicksburg and Jackson residents, who formed a hunting camp on Steele Bayou. In the 1930s, much of the area was only accessible by a barge on Steele Bayou, except for a few wagon roads. In 1940, the club split, with the Vicksburg group forming the Buckhorn Hunting Club and the Jackson group retaining the Ten Point Hunting Club name. Also at this time, the land first became accessible by way of the Eagle Lake Road ferry.

In 1950, Ten Point and Buckhorn clubs formed the Ten Buck Conservation Association. The purpose of this organization was to hold leases, provide overall management of the hunting land, and afford additional protection against damage and liability claims. Each club continued to take care of its hunting activities, and each had its own rules and regulations. On April 1, 1950, the Ten Buck Association secured a 20-year lease on the ATCO property for $1. This is thought to be the first formal written lease for hunting and fishing issued by ATCO.

Over time, more clubs would form across ATCO lands in the Steele Bayou area. Given this extensive network of managed lands, Ten Point and Buckhorn Clubs helped lead an effort in 1978 to form the Mahannah Deer Management Association. Multiple clubs contended the association could help better manage habitat and wildlife on these lands.

Over the last century, many generations have grown up in these clubs and enjoyed hunting and fishing in the lush bottom-lands around Steele Bayou. However, as with all things change is usually inevitable, and it is certainly so within the forest industry. In recent years, ATCO began liquidating land assets to adapt to a changing industry. MDWFP and The Nature Conservancy entered into discussions about acquiring the property immediately adjacent to Mahannah WMA. The deal became final in July 2018, securing a large tract of ecologically and recreationally valuable land to be held in public trust.

Bryant recognized as a champion of Mississippi conservation

Gov. Phil Bryant always has been happy to convey his love for hunting and fishing in Mississippi. And he did so quite emphatically at his first Governors Sportsmen’s Council gathering.

“I remember walking into that room that evening in Washington, DC, and there were a number of people there,” Gov. Bryant told a group at the recent opening of the McIvor Shooting Facility in Sardis. “I was relatively new at that time as a governor. There were a number of them talking about how there were sports in their states and how they had these hunts – pheasant hunts and one-shot antler hunts – and they said, ‘what do you do?’ I said, ‘Well, I try to do all of it, but one of my favorite things to do is hog killing … with a knife.’ They said, ‘You want to be chairman?’ I said, ‘I think I do.’” Phil Bryant will be recognized as governor for only a few more days, but his recognition as a champion for Mississippi outdoors and conservation will continue when the Phil Bryant Wildlife Management Area officially opens for hunting for the 2019-2020 season.

“(Phil Bryant) has been one of the biggest friends of the Agency and outdoors and conservation,” said Mississippi Wildlife, Fisheries, and Parks Foundation co-treasurer Chris Gouras. “Time and time again, when we’ve asked him for help, he has always been there. Annually, our biggest fundraiser is the Governor’s Hunt. We have about 50-60 supporters of that event every year. The governor has been there every year, eight years in a row. And during that time period, he has helped us raise over $2 million … to help support the initiatives and the things that we do.” MDWFP Chief of Staff, Wildlife Russ Walsh and selected excerpts from The Habitat, the newsletter for ATCO, contributed to this report.