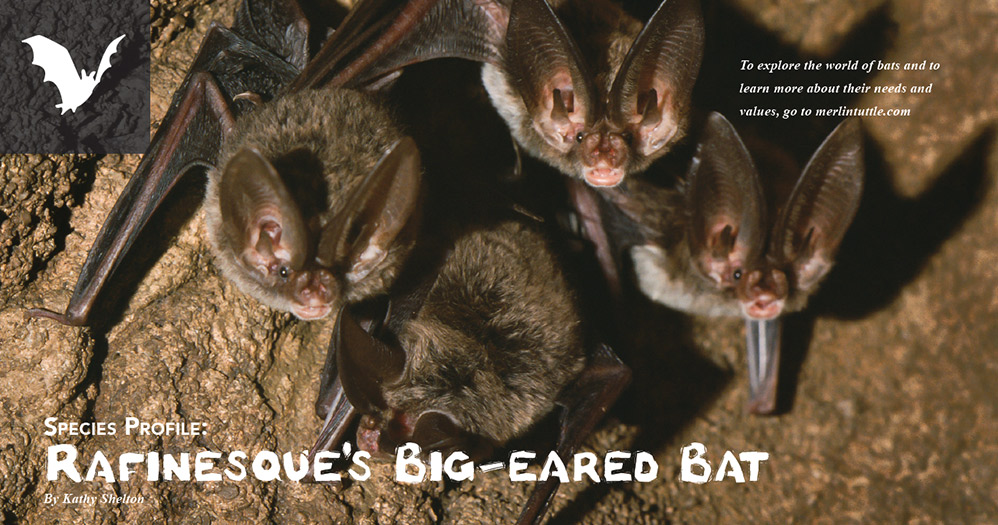 The Rafinesque’s Big-eared Bat is probably one of Mississippi’s most easily identified bats, distinguished from the state’s other bat species by the large ears (hence the name). The ears on this bat, when extended, can be over an inch long. A similar species, Townsend’s Big-eared Bat, is not found in Mississippi so there can be no confusion between the two. Although the range of the Rafinesque’s Big-eared Bat covers the entire state, it is uncommon and is a Species of Greatest Concern in Mississippi. Before 1990, there were only 12 counties with records of big-eared bats. Since then, increased surveys have expanded that to more than 30 counties. This species’ habit of flying high above the tree canopy means it is seldom caught by biologists in mist net surveys. Surveys of bridges and old buildings are one of the best methods of finding them.

In the summer, female big-eared bats form nursery colonies in large hollow trees with openings near the base, where they give birth and raise their young. The tree cavities provide protection from predators and maintain a climate essential for the young to survive. Like most bats, reproduction usually occurs in the fall. A delayed fertilization results in a single pup being born from late April to early June the following year. Young are born flightless but learn to fly by three weeks. By two months, they are weaned from their mother. Male bats do not assist with raising the young. Males form small bachelor colonies and often move between roosts. Big-eared bats eat a variety of night flying insects but the majority of the diet is composed of moths. Other prey includes beetles, cicadas, flies, bees, and ants. The bats either catch the prey while flying or glean items from nearby foliage. The primary foraging habitat is along forest edges and river corridors. They are agile fliers, can easily maneuver through cluttered habitats, and hover to capture stationary prey.

With the loss of the large hollow trees once so abundant in bottomland hardwoods and tupelo swamps, Rafinesque’s Bigeared Bats have begun using man-made structures. It is not unusual to see these bat roosting in abandoned houses and bridges, often alongside other bats species. Mississippi’s largest known big-eared bat maternity roosts are in old buildings. While big-eared bats are often found using caves in other areas of their range, they are seldom found in caves in our state.

Bat conservation in Mississippi often focuses on the creation or management of these man-made structures. Bridge replacements now often include bat-friendly structures, and it is not uncommon to see artificial roosts in place on public lands. This, combined with a focus on managing forests long term to provide natural roosts for all bat species, will ensure populations of Rafinesque’s Big-eared Bats will remain healthy.