For Pre-K through high school students, Kids Club offers games, puzzles, and other fun activities related to the Museum's permanent and special exhibits. These activities highlight things that you can see in the Museum and in nature.

Fossil Stories
Campers Discover Prehistoric Croc Teeth
Madison County students Jack Bates, 9, and Keizia Davidson, 11, each excavated a crocodile tooth during two separate sessions of this summer's Camp Wild. The teeth are estimated to be about 55 million years old! The students were digging in the "fossil pile" at the Museum when they discovered the teeth. Several years ago, the pile was trucked into the Museum for educational purposes from a fossil rich deposit of the Bashi Formation at the infamous, old Red Hot Truck Stop in Meridian, MS.

The crocodile teeth are a rare find and are considered a "significant" find. Kezia and Jack are both written up in the Museum's database and the teeth are catalogued into the Museum's collection.

George Phillips, the Museum's Paleontology Curator, believes that the two teeth came from two different animals of the same species of Eosuchus or "dawn croc", a brackish water fish-eating crocodile found 55 million years ago, 10 million years after the time of the dinosaurs.

Harvey and Dalton's Fossil Finding
Pictured below are Harvey Huffstatler and his grandson Dalton Dear, both of Jackson, with an incredible fossil Harvey found near Bluff Springs in Union County. The fossil is a "steinkern," or internal cast, of a nautiloid, a marine mollusk from the genus Eutrephoceras. This creature was the ancestor of the chambered nautilus that exists today. Nautiloids like Harvey's were common in the Upper Cretaceous Period, about 65-85 million years ago. Many smaller nautiloids (like those pictured alongside the new find) have been unearthed in the northeastern and east-central parts of the state, but Harvey's fossil may be the largest nautiloid of this genus ever found! 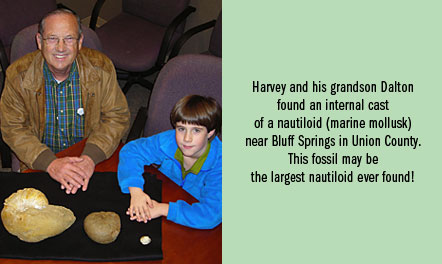 Caitlin and Annie's Fossil Findings
Pictured below are Caitlin and Annie with fossils found on the Chickasawhay River near Waynesboro at the end of September 2006. Caitlin is holding the axis (2nd vertebra, in the neck) of an unidentified medium-sized ungulate (hoofed mammal), which is about the size of a deer. Annie is holding the lower half of the left femur (thigh bone) of a juvenile rhino. 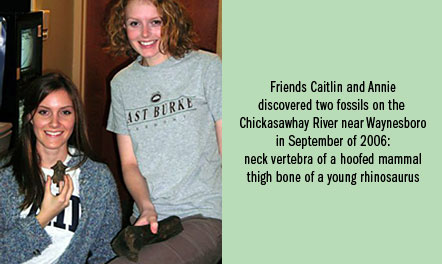 Make sure you visit the Kids Corner often to check out new activities and news about the Museum!