History of Bears in Mississippi

Black bears have played a substantial role in the heritage and history of Mississippi.  Native Americans used the black bear as a source of food, clothing, and goods for trade with European travelers.  As settlers moved into the area, black bear hunting from horseback became a popular sport.  There are few areas in the southeastern U. S. with as rich of a bear hunting tradition as Mississippi.  The vast acreages of bottomland hardwood forests and impenetrable canebrakes of the Mississippi Delta were home to high densities of black bears at the turn of the century.

The lure of hunting bear from horseback with the aid of dogs created some of the earliest legends of bear hunting, while attracting many dignitaries and heads of state from across the country.  Of course, no other bear hunt is quite as famous as the Teddy Roosevelt hunt.  Roosevelt had long wanted to participate in a Delta bear hunt and was invited to do so in the fall of 1902.  On November 14, his party hunted on Smedes Plantation in southwestern Sharkey County.  The guide was a former slave named Holt Collier, the most accomplished bear hunter in the nation's history.  On the day before the hunt, in a display of self-confidence,  Collier predicted that he would help the president get a bear if he had to catch it and tie it to a tree himself.  The rest, as they say, is history.  Factual details of the hunt, and the life of Holt Collier, can be found in Minor Buchanan's book, Holt Collier: His Life, His Roosevelt Hunts, and the Origin of the Teddy Bear.  Suffice it to say that they do not match the media accounts or the political cartoon "Drawing the Line in Mississippi".  It is true, however, that Roosevelt declined the opportunity to kill a bear not taken in fair chase. After hearing about the event, a toy maker requested the President's permission to name his small stuffed bears “Teddy's Bear”, hence the birth of one of Americas most famous children's toys. 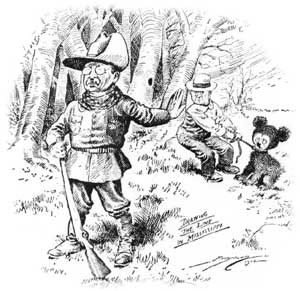 By the early 1900s, bear numbers saw a sharp decline due to over hunting and habitat destruction and fragmentation.  Black bears were nearly extirpated from the Mississippi landscape with less than a dozen individuals remaining.  In 1932, the black bear was given statewide protection and was later included on the first list of rare and threatened vertebrates of Mississippi in 1974.  In 1984, the black bear was listed as an endangered species in the state, where it remains today.