Male black bears typically reach sexual maturity at 3-4 years of age.  Females generally breed for the first time at 3 to 6 years of age and will give birth every other year.  Age of sexual maturity for both males and females is largely dependent on habitat quality.

Females come into estrus as early as late May and as late as August with the peak of breeding taking place in July.  Females will remain in estrus until they breed or until ovarian follicles begin to degenerate.  Dominant males may mate with several females in an area.  A dominance hierarchy determines access to females with older, larger males displacing younger males. 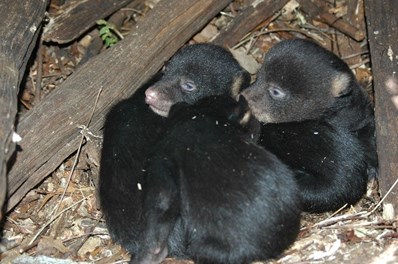 Black bears exhibit what is called delayed implantation.  This means that after breeding, the fertilized egg remains in a state of suspension for about 5 months before implantation occurs and the fetus development begins.  Fetal development takes place for 6-8 weeks before the cubs are born.  Total time from breeding to cub birth is a little over 7 months.  Cubs are born in winter dens during January with litter sizes ranging from 1 to 5.  Cubs weigh only 8 ounces at birth but will weigh 4 to 5 pounds when they emerge from the den in April.  Cubs will stay with their mother for 18 months before dispersing. 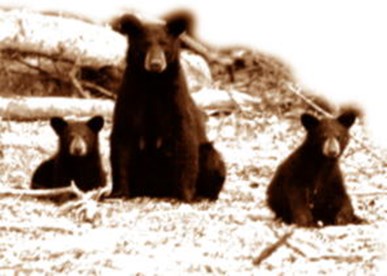 If a female’s litter is lost prior to late summer, she may come into estrus and breed again, producing consecutive year litters.  Females may also deviate from the alternate year cycle if they are not in sufficient health or nutrition to come into estrus during a particular year.  Years of poor food production can cause reproductive failure within an entire population.