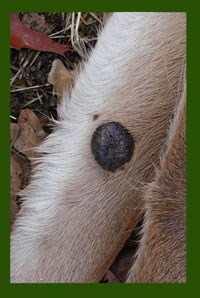 Cutaneous fibromas, more commonly called deer warts by hunters, are occasionally observed on harvested deer. The fibromas are pealing, especially when they appear in large numbers. "Grotesque" is a common description of these harmless skin blemishes. The fibromas are found in deer herds from a majority of states in the nation. As a result, they are considered to exist in the entirety of the white-tailed deer range.

According to Diseases and Parasites of the White-tailed Deer, published by the Tall Timbers Research Station, R. F. Shope was the first wildlife investigator to actually find the specific virus. Shope was also the first researcher who experimentally infected deer with the viral agent. He found that the fibromas normally appeared at about 7 weeks after inoculation and that they began to regress after 2 months in most deer. Because of his work with infectious cutaneous fibromas, a commonly accepted name for the growths is Shope's fibroma.

Fibromas are caused by a virus which is thought to be transmitted by various biting insects. However, another possible means of transmission of the viral agent is direct contact through any assortment of contaminated objects which may scratch or penetrate the skin of the deer. 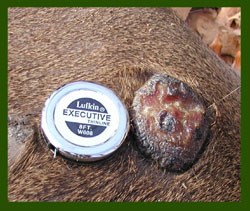 The actual fibromas are gray or black in color and range in size from less than one-half inch to 8 inches or greater in diameter. The warty growth is covered by leathery, hairless skin that can appear as a single growth or in multiple clumps. Reports of over 200 fibromas have been confirmed on a single deer. Although the fibromas can be found on all areas of the body, the most common locations are the head, neck, and shoulders.

Rarely do fibromas cause deer any problems, but occasionally the location of a large single or multiple clump of fibromas can interfere with sight, eating, breathing, or even affect the ability of the deer to walk. Occasionally, the larger fibromas acquire a bacterial infection through a break in the skin. If you cut into a fibroma, you will find it a solid mass which has a white color throughout the growth. The attachment of the fibroma is limited to the skin and no evidence of it can normally be found in the muscle. Fibroma presence is typically not detectable after skinning the deer. 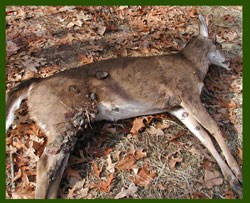 An array of wart-like viruses also appears on domestic livestock. These viruses are different from the ones found on white-tailed deer, therefore spreading of the deer fibromas to livestock is considered to be of no consequence.

No human infection from cutaneous fibromas has been reported. The only concern for hunters would be from an animal with extensive bacterial infection, which would render the deer unsuitable for human consumption. These animals would be readily apparent due to the unpleasant exudate produced at the infection site.

In summary, cutaneous fibromas are merely skin blemishes of white-tailed deer. They are of no significance to the health of the deer population. 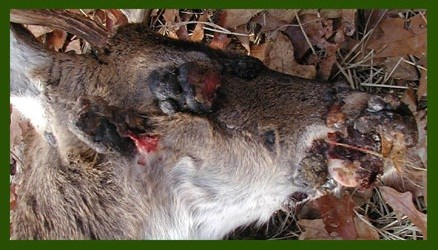