The Black Belt Region of Mississippi and Alabama once included more than 350,000 acres of native 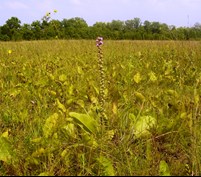 grasslands.  These prairies are a product of their unique geology. Many of the native grasslands in the region have been converted to production agriculture, pine plantations or significantly degraded by the presence of non-native grasses and invasive native woody plants. Remnant prairie sites are scattered across the region, most of which are no greater than 10 - 20 acres in size.

Prairies and other early successional grasslands provide critically important habitat for many species of upland game, such as rabbits and bobwhites, as well as grasslands songbirds, such as the Dickcissel, Eastern Meadowlark, and Grasshopper Sparrow. Additionally, prairie grasslands in the Black Belt Region have outstanding biological diversity, hosting more than 400 species of plants and several thousand species of invertebrates.

In 2004, Wildlife Mississippi, in cooperation with the MDWFP and other state and
federal partners, began the Black Belt Prairie Restoration Initiative which sought to restore, enhance and protect native prairie habitat within the Black Belt Prairie Region of Mississippi and Alabama. To date, approximately 10,000 acres have been restored and or enhanced under the Initiative with several more projects currently underway.  In 2010, the Initiative was granted a conservation practice in the Conservation Reserve Program to provide financial incentives for landowners to restore prairie grasslands on marginal crop lands in the Black Belt. Restoration efforts are constantly evolving based on information gained in the field and through research projects.

For more information about restoring prairies or managing early successional habitat or your property contact the following: