The MDWFP has conducted random, statewide surveys of hunting license holders almost yearly since the early 1980s (with some periodic surveys prior to that). The data below are from these surveys conducted since the 1980 - 1981 hunting seasons. These data do not separate wild and pen-raised, released quail. It is assumed that a large proportion (perhaps more than 80%) of the more recent quail harvest is pen-raised quail. The dramatic decrease in harvest and number of hunters is a result of quail being harder to find due to less suitable habitat for birds to thrive in. Although wild quail are seldom found in numbers suitable to provide significant hunting opportunity, wild quail still persist in small populations throughout the state. Habitat management allows those populations to increase. However, it must be realized that habitat must be enhanced over more than a few hundred acres to have a large-scale effect on local populations. Therefore, conservative harvest and promoting habitat management across multiple land holdings is important for sustaining huntable quail populations. See the quail Management Information section or contact a wildlife biologist for more information about quail habitat and population management. 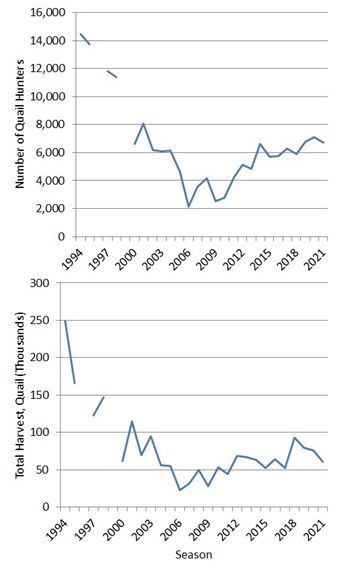 The Small Game Program conducted surveys of hunters pursuing wild quail from the mid-1990s to the 2011 - 2012 hunting season. However, we began to receive too few data to obtain useful information given the time and expense required to administer the survey. It was discontinued in 2012. 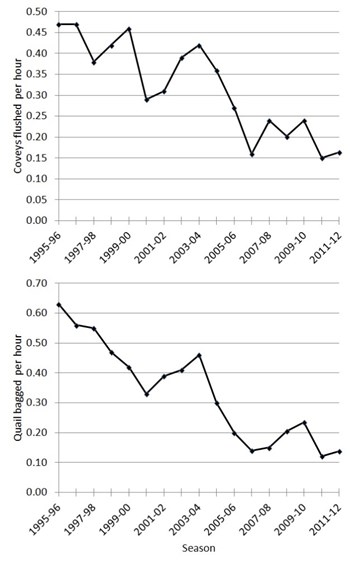