The Life and Times of Fall Turkeys 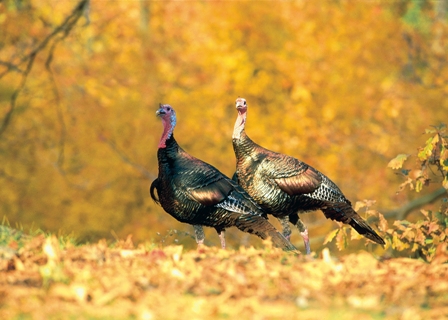 As the leaves quietly drift downward through the trees, and autumn's cool days approach, most of Mississippi's hunters turn their minds toward deer, ducks, squirrels, and rabbits.  Except for the handful of hunters who take advantage of our limited fall turkey season, most turkey enthusiasts spend little time worrying about the wily birds until the approach of spring.  However, the fall / winter period is an important time in the annual cycle of the bird, and the habits exhibited by fall turkeys make them seem to be a different bird to which most spring hunters are used to dealing.  The following glimpse into the secretive life of fall turkeys will hopefully cast them in a new light, and may render a renewed appreciation for the birds during a time when deer dominate the minds of most Mississippi hunters.

One of the most common statements voiced by turkey hunters is, "I saw turkeys all winter during deer season, but I can't find them during spring."  The reason for this complaint is simple:  the birds focus on different habitats at different times during the year.  Throughout the spring and summer, turkeys spend a large proportion of their time around fields and open woods which contain low-growing grassy and weedy vegetation.  However, the changing seasons marks a time of transition for most turkey populations.   The insects, seeds, and leafy vegetative growth that sustained the birds throughout the summer in open areas begin to decline as the days grow shorter.  At the same time, more hard and soft mast becomes available throughout mature forests.  In many areas, this disparity causes a dramatic shift in the home ranges of turkeys.  Beginning in September, turkeys begin to gradually reduce their use of open habitats, and shift their ranges into areas of mature forests.  Home range shifts of up to several miles are not uncommon, though the distance that turkeys will move often depends on the success of the acorn crop and the proximity of mature forests.  By early November, the birds will spend nearly all of their time within mature woods, and they will remain there until late February.

More so than at any other time of year, turkey movements are regulated by the availability of groceries during fall and winter.  During the early fall, fruits of various wild vines, shrubs, and trees are abundant and are the primary component of the diet.  Wild grapes, black cherry, dogwood, persimmon, pawpaw, American beautyberry may all be found in turkeys' diets from September to late October.  By early November, however, diets have almost totally shifted to acorns and other hard mast.  The acorns of nearly all species of oaks are consumed, and along the Mississippi River, the nuts of sweet pecans are also important.  The mast of beech trees is another relished turkey food during fall and winter, but its production can vary greatly from year to year. Likewise, pine seeds, particularly those of longleaf pine, are also consumed by turkeys at this time, but they are rarely considered an important food source due to the tree's highly variable production.

The social behavior of the birds also changes with the seasons, and becomes particularly interesting during the fall and winter.  By early fall, distinctive flocks have formed which are usually divided by gender, and sometimes also by age.  Female offspring typically stay with their mothers throughout their first fall and winter, and form flocks composed two or three adult hens and their broods from the previous spring.  Hens that unsuccessfully nested during spring typically begin autumn in separate flocks, though they may join hen-brood flocks at some point.  Gobblers form separate flocks, and are rarely found in association with hens during this time of year.  In areas with dense turkey populations, gobbler flocks will also be segregated by age group:  young-of-the-year, upcoming 2-year-olds, 3-year-olds, and "old timers."  Oftentimes the latter two age classes will merge, though members of these age classes rarely associate with other gobblers during spring.  Hens do not share the gobblers' tendency to segregate themselves by age groups; this is likely because the physical difference between age groups is not as apparent in hens as it is in gobblers.  In areas of low populations, gobblers seem unable to ignore their gregarious nature, and if sizeable numbers of similar aged individuals cannot be found, will readily form flocks with their older and younger peers.  Young-of-the-year males begin the fall in association with their mothers, but many break away and form their own flocks by late fall.  Within flocks of mature gobblers, pecking orders seem relatively established during the winter, but that is often not the case within flocks of young-of-the-year gobblers.  Members of these young flocks constantly squabble, as each bird vies for the dominant position.  Fighting is common, though these skirmishes rarely reach the intensity seen in the fights of older birds during the spring.

In most areas, hen and gobbler flocks will utilize different habitat types, and are rarely found in association during the fall and winter.  Studies conducted on turkeys fitted with radio transmitters have shown that during this time of year hens are more consistently found within the bottomland hardwoods of major creek and river drainages, whereas gobbler flocks tend to utilize the mixed pine/hardwood transition areas along secondary streams.  Gobblers also seem to periodically use recently burned upland areas during the fall and winter months, while hens nearly always avoid these areas until spring.  This segregation of habitat is believed to occur because gobblers may be able to exploit a wider range of resources due to their larger size, and foraging independently from hens may minimize competition for the winter's limited resources.

Though lack of fall and winter habitat is rarely touted as a wide scale limiting factor for turkey populations, retention of these areas can be important, particularly in landscapes dominated by pine plantations.  Maintaining wide hardwood buffers, known as Streamside Management Zones, along streams can ensure the interspersion of fall and winter habitat and provide travel corridors throughout landscapes that may otherwise have little to offer turkeys from October to February.  Clear cutting large acreages of mature hardwoods should be avoided if turkeys are to be an objective of land management.  This does not, imply that logging crews should never be allowed in hardwood stands;  on the contrary, periodic, selective thinning of hardwood stands can increase acorn production, provide nesting and brood habitat during spring, and still provide landowners with an income source.  Through management of hardwoods, landowners can increase the value of these areas as wintering habitat, while still providing the essential habitat components needed during spring, thereby decreasing the need for turkeys to shift home ranges throughout the year.  If you would like to learn more about managing your property to provide the winter essentials for turkeys, contact Adam Butler at butler.mdwfp@gmail.com, but be warned:  frequent sightings of long-bearded gobblers throughout the winter can make the wait until spring nearly unbearable!