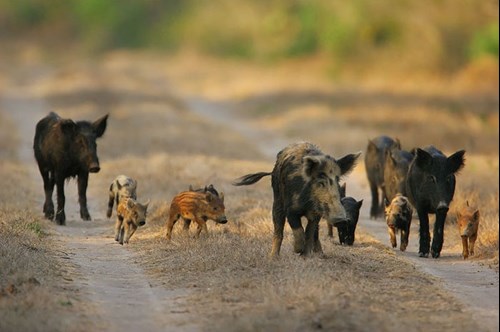 Wild hogs are the most prolific large mammal in North America, which presents many challenges for eradication efforts. An estimated 75% of a population must be removed to maintain the same number of individuals from one year to the next. Most often, wild hogs breed once or twice per year in favorable conditions. Compared to other large mammals, wild hogs have a very short gestation period of about 114 days. Sows are sexually mature at 6-8 months of age and average 4-6 piglets per litter.

Wild hogs can be found in social units called sounders. These sounders usually include one or several mature sows with one or more generation of offspring. A sounder can be comprised of a few individuals to several dozen. Sub-adult males will disperse from the sounder at approximately 16 months of age, while females may stay with the sounder or leave to found their own at about one year of age. Newly dispersed boars can often be found in small social units called bachelor groups. By the time boars reach full maturity, they are usually completely solitary, only interacting with sounders to breed.