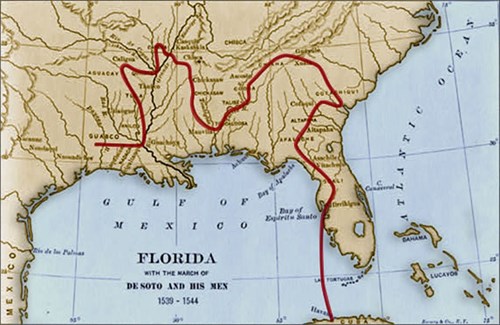 Prior to 1539, no swine species were found on the North American continent. Up until then, the only pig-like animal found in the Americas was the peccary (family Tayassuidae). Hernando De Soto, a Spanish explorer, was the first to introduce domestic swine (family Suidae) to the mainland of North America. During his exploration throughout the southeastern United States (red line shown above), he and his men brought along domestic swine from Europe for food. Many of these pigs either escaped from pens or were free-ranged and abandoned. This practice led to the establishment of subpopulations of wild-living swine throughout the Southeast.

The first introduction of swine into Mississippi is thought to be around 1542 in the northeastern region of the state. In January of 1699, Sieur d'Iberville brought more swine to the coastal areas of Mississippi (near Biloxi). As other explorers and colonies began to settle in North America, more and more domestic swine were brought from Europe to the Americas for food. Because of this, most of the subpopulations of wild hogs in our state can be traced back to these introductions of domestic pigs.

Introduction of the Eurasian Boar

Due to anthropogenic factors and their reproductive characteristics, wild hogs can now be found in at least 45 states. Currently, there are three variants of what are collectively referred to as "wild hogs" in North America. Present-day subpopulations of wild hogs can be traced back to domestic descent (feralized), Eurasian descent, or a hybrid of the two (feralized crossed with Eurasian wild boar). There are slight differences in morphological and behavioral characteristics between these variants, but no matter what the lineage, they should all be controlled through the same techniques and methods.