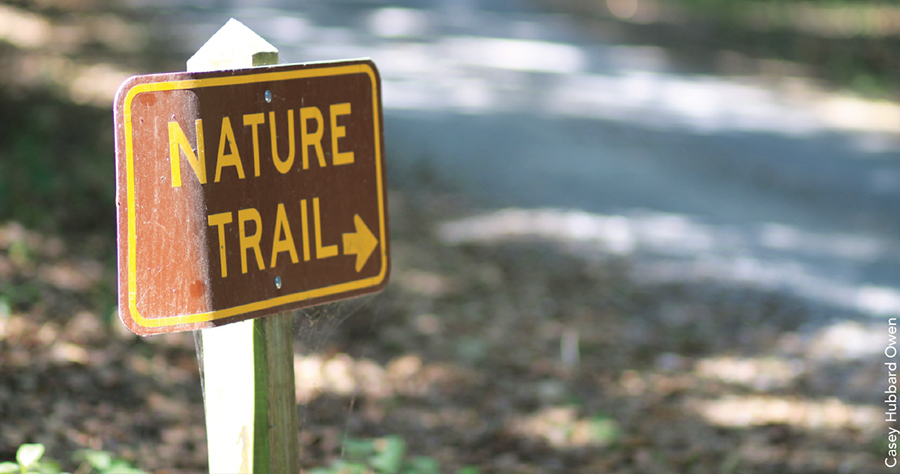 The recreational trails at Mississippi State Parks certainly offer breathtaking views for families, especially during the summer months. Whether one chooses to hike, bike, or ride horseback, these family-friendly trails can take you back in time or just about anywhere you want to go.

The state park entrance fee is $4 per vehicle (a $50 Annual Pass is good for entrance to all Mississippi State Parks).

Located in the heart of the Mississippi pine-belt region, approximately 10 miles south of Hattiesburg, the deep forest of Paul B. Johnson State Park provides a lovely backdrop for foliage and wildlife. The 1.5-mile “Trail of the Southern Pines" is well marked as it meanders through gently rolling hills and across the boardwalk through a marshy area.

Park manager Mike Stepp estimated at least 25 people a day take advantage of the nature trails. “I’d say the majority are University of Southern Mississippi or William Carey College students,” he said. “They like to come to a safe area that’s pet-friendly. Our circular path features trails inside of trails; it’s impossible to get lost.”

Considered as one of “50 underrated state parks across the U.S. that everyone should visit in their lifetime” (by Insider.com), LeFleur's Bluff provides a lush green spot in the heart of urban Jackson.

Bryan Keller, who has lived with his wife and two sons in the Belhaven neighborhood for the last several years, said the park is “practically our extended backyard.” Keller often roams the nature trails with his sons and his Cub Scout troop, and he also does some birdwatching.

The Kellers have an annual pass to the park and the Mississippi Department of Wildlife, Fisheries, and Parks' Mississippi Museum of Natural Science, which is located on the park’s west side. LeFleur’s Bluff boasts five different trails that vary in length and topography: Cypress Swamp Trail, Old Pond Trail, Overlook Loop, Old River Run, and Pearl River Trail. Sixteen points of interest have been identified along the different trails, including a boardwalk bridge, ravine, fossil gulch, pawpaw patch, and Mayes Lake. 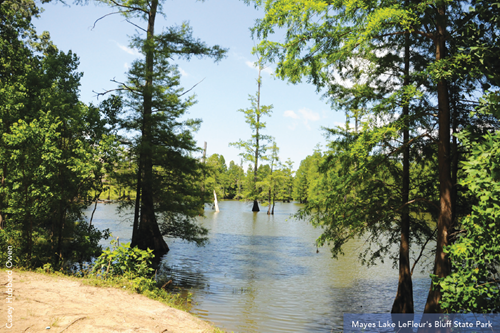 Park manager Karl Vriesen said the trails get a lot of use by campers and locals. While each trail is less than a mile long, many connect and some loop. “Near the primitive camping area, one trail turns into a gravel road that turns into a paved road,” Vriesen said. “If you begin at the Day Use area, it’s four miles long. It’s absolutely beautiful back there.”

Keller added, “It’s a fantastic little gem nestled in the middle of the city. I really would like for more people to use it, but then again, I don’t.”

Located just six miles south of Tupelo, Tombigbee State Park offers options for both hikers and bikers. For hikers and avid birdwatchers, there’s the 1.2-mile Tree Trunk Nature Trail that winds through forest and along Lake Lee. Park manager Jeff Rosamond said the trail is divided by a 180-foot bridge into a longer and a shorter segment, and it features two decks and overlooks points on the lake.

But it is the park’s relatively new bike trails that have garnered the most recent attention. Todd and Candy Wheeler of Tupelo and a few other members of the Northeast Mississippi Cycling Club approached park management for permission to build the trails after the nine-mile trail at nearby Elvis Presley Lake was destroyed in an April 2015 tornado. “We used topographical maps and looked at the lay of the land — a lot of it you had to cut along the way to decide if it was going to work or not,” Candy Wheeler recalled. “We never cut big trees down, but we did have to remove some saplings.” The first year they completed four miles; now, the trail measures 11 miles, and the group is working on adding at least one more mile. 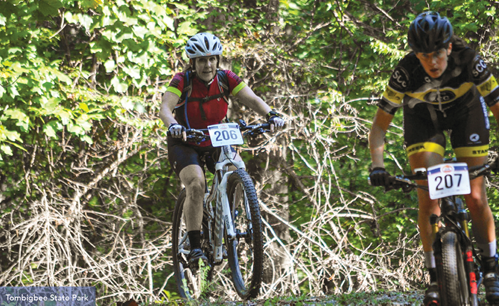 “The trails are well used by people from all over,” said Candy Wheeler, who rides the trails several times each week. “We have a two-mile loop trail that is fun and fast and a little less elevation, so it’s a little easier for beginners. The nine-mile loop is a little more technical.”

In September 2019, the park opened a quarter-mile Physically Challenged Bike Trail, thanks to funding from the Recreational Trails Program, a federal-aid assistance program to help states provide and maintain recreational trails. Toyota Motor Manufacturing Mississippi supplied materials and workforce to build rest stations and pavilions along the new path.

“We have 550 beautiful rolling acres in Scott County, with our 150-acre Shadow Lake sitting at its center point,” said Louis Correro, Roosevelt State Park assistant manager. “With almost five miles of nature trails, you can always spot some of the local wildlife in their natural setting.”

Correro said the Civil War Trail, which is the longest at two miles, is a great way to spend the afternoon with an abundance of deer making an appearance.

“With a trained eye, you can also spot the old horse-and-wagon roads that zig-zag through the park,” Correro said, “and, on the trail, the foxholes confederate troops dug in the rolling hills.”

On Lakeview Trail, one usually can see a beaver playing near his den. “During the spring, muscadine vines hanging along the Muscadine Trail offer a sweet treat for the two- and four-legged trail walkers coming through,” Correro said, noting that the park also features Rolling Hill, Pinelane, and Beaver Dam trails.

In 2018, employees from Nucor Steel in Flowood helped park personnel build nine bridges along the trails, so no one has to “hop creeks” on their walk.

First Baptist Church in Quitman pastor Gene Neal walks the trails at Clarkco State Park often. “It’s really pretty out here, and it’s so removed from civilization,” Neal said. “I love to hike the Appalachian Trails, and this is the closest thing to that feeling.”

Located just south of Meridian, Clarkco State Park offers 5.6 miles of nature trails. “The Mississippi Forestry Commission is doing controlled burns, and that has really added to the walk—now you can see the tall pines,” said park manager Toney Fleming. “AmeriCorps volunteers have built four bridges on the trails, and they’ve widened one trail. They’ve put down crush and run stone, cleaned the trails, and are keeping them cut back.”

For Neal, diversity is vital, and Clarkco delivers. “It’s not the same scenery over and over,” he said. “There’s an old observation tower on one end of the lake, and there’s an old concrete goldfish pond built back in the 1930s by the Civilian Conservation Corps. Sometimes walking can be boring, but not out there.”

In 2019, the park hosted its first cross-country meet with 220 students from eight high schools. For that meet, Fleming said they had to incorporate a few paved areas to reach the required distance of seven miles, but construction has begun, and by the 2020 season, the entire run will be on trails.

Laid out by the Youth Conservation Corps in 1983, the Opossum Nature Trail at Lake Lowndes State Park near Columbus follows the bank of Lake Lowndes on the backside of the park. “The actual trail is 3.5 miles, but it is a total of five miles by the time you walk back to your vehicle,” said park manager Penny Wyers. “The trail is color-coordinated so you can follow the green signs.”

Fran Simpson lives nearby and visits the park several times a week. “The trails are very much a stress relief,” Simpson said. “The boys enjoy fishing, so when I ask if they want to walk with me, they don’t mind at all — they grab their fishing poles and tackle boxes and walk with me.”

Simpson said she enjoys “walking all over the park for the calm and peace of mind,” but her favorite trail is the Opossum Trail. “The lake is a beautiful place, and lots of family pictures have been taken there.”

Also, the park offers an equestrian trail, a color-coordinated, seven-mile loop on the backside of the park. Eagle Scout Trevor Martian created maps to place along each loop of the horse trail in 2013 and named each section. “His project improved the guiding of our horse trail and our hiking trail to keep people on the trails and less likely to get lost,” Wyers said. “You can ride over meandering creeks, across bridges, and up and over hills. The purple trail on the horse trail is home to our four American bald eagles.”

The equestrian trail can also be traveled on foot or mountain bike. For those who choose horseback, the fee is $8 per horse or $102 for an Annual Pass, which is good at Lake Lowndes and Trace state parks.

Trace State Park near Tupelo features 49 miles of trails that can be explored on foot, horseback, ATV, motorcycle, or mountain bike.

Park manager Josh Massey said there are also three additional hiking and mountain bike trails totaling 14 miles that are closed to motorized vehicles. These trails, which are maintained by the North Mississippi Cycling Club, include a two-mile loop and a more challenging nine-mile loop. These trails are well-marked and have mile markers at every mile, “so you won’t get lost,” Massey said.

ATVs, motorcycles, and horses share more than 35 miles of trails that cover most of the park’s 2,500 acres. “The trails are very wooded, and they are in good shape,” Massey said. “There are lots of ups and downs. You’ll run over roots and run through mudholes here and there. There are two bridges that cross the creek.”

A horse barn is available overnight for campers who stay at the park. “We have a round pen at the campground for horses,” Massey said. “The trails are easy to get to from the campground.” Also, trail maps are provided to riders.

Deborah Roberts is a freelance writer for Mississippi Outdoors.