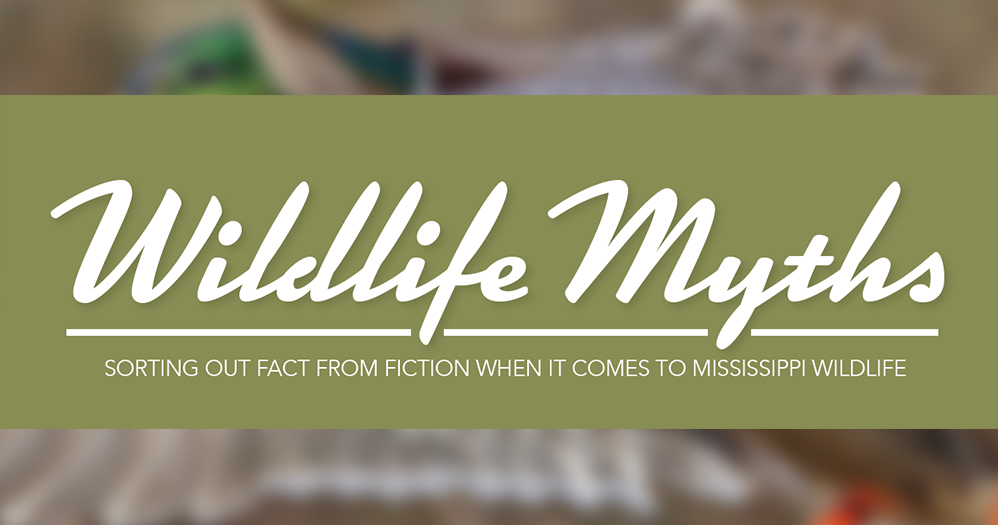 How many times have you heard deer see in black and white? Or mallards with bright legs just migrated in? The following are some of the topics discussed by MDWFP biologist Adam B. Butler and Conservation Officer Maj. Chris Reed during a broadcast of “Mississippi Outdoors Radio” on SuperTalk Mississippi.

MYTH: It is illegal to shoot an all-white, female turkey even with a beard

The law says it has to be a male turkey. Even though she had a beard, she would not be legal. Interestingly, between 5% and 8% of hens will have beards. And turkeys can have different color phases. A true albino, which has pink eyes and is solid white, is extremely rare. But turkeys do have a color phase that’s kind of called a smoky-gray phase. And for whatever reason, hens are way more common in that than gobblers. I don’t have a great explanation for why, but by one estimate, one out of every 250 hens will be that white color. And on gobblers, it’s … at least 10 times rarer than that.

MYTH: Mexican quail introduction into Mississippi is the reason for the decline in the bobwhites in Mississippi

If you go back to the 1930s, there were about 30,000 bobwhites from Mexico released in the state. Now that sounds like a lot, but you have to remember at that time we were harvesting about 6 million bobwhites a year. That is just what was being harvested, so you can imagine what the total population might have been. Dropping 30,000 birds into a population that is in the tens of millions is certainly not going to change the gene pool. Furthermore, there are 22 different subspecies of bobwhite. People who are familiar with quail hunting in Texas, they are familiar with the Mexican subspecies. It is not a darker subspecies like the legend holds. They are actually lighter in coloration than our birds.

The sweetness of the acorn is dictated by tannic acid in the acorn, and each species of oak has a different level of tannic acid. So there is a difference in sweetness, I guess, but that’s inherent with the species. You can’t change that with the individual tree. As far as making it more productive, it actually could be counter-productive. When you fertilize any kind of plant, what you’re doing is trying to entice it to grow more green matter. That doesn’t necessarily mean you’re going to grow more acorns. So what we recommend, if you really want to increase acorn production, the best way to do that is, first, find the individual trees that are most prolific. And then thin around those trees and give them more room to grow a bigger crown. If you have a tree with a bigger crown, you’re going to have more acorns. But just simply putting a little fertilizer around the tree is not going to do that for you.

Mallards, for the most part, are not going to lay their eggs here in the South, but they do pair up. As we go later into the winter, the drakes start putting on more and more of that breeding plumage – their green gets a little greener. They want to look good. And part of that is the legs are going to turn bright orange. The reason why this is an easy myth to believe is that a lot of times that coincides with some of the late January cold fronts we’ve had. So you get big pushes of ducks at about that same time. But that coloration has nothing to do with whether they have migrated or not. It is just simply later into the winter and it is getting closer to breeding season.

MYTH: Because of an early spring, turkeys will be “gobbled” out by the end of turkey season

There comes a point in the breeding season where turkeys are not going to be gobbling as much, but that generally happens far, far later than most people think. We are talking way on over into May and early June when they are completely done gobbling. What usually happens is, as we go later into the hunting season, some of the more vocal birds have been harvested and taken out of the population. And hunting pressure, they respond to that. If they are getting bumped by hunters on a regular basis, they start putting two and two together and become a little quieter. We have some data from our spring gobbler hunter survey that shows that if you look at gobbles per individual turkey heard, that number increases steadily throughout the turkey season. So an individual gobbler is most likely to gobble a lot later rather than earlier.

It depends. The only local birds we’re going to have in Mississippi are wood ducks. So if you harvested a wood duck, then that could be a bird that was hatched here. But almost any other species of duck, all the puddle ducks — we’re talking gadwalls, mallards, pintails — they’re coming from way off. And it may be the ones that are here on opening day came a little shorter way, like South Dakota or Iowa rather than Saskatchewan. But they were not hatched here in Mississippi.

It’s not that they see in black and white. The closest analogy would be, like some people, they’re red-green color blind. So they can see in different shades — probably can see blue better than any other color — but they are not seeing in black and white.

MYTH: Prescribed burning in the spring is bad for wildlife

A lot of the bigger public lands do prescribed burnings in the late spring. One of the big concerns is always turkeys. … And I have yet to see any research that has led me to believe burning in the spring is a detriment to turkey populations. Now you can probably burn too big, but it is not necessarily a timing thing. It is not because it’s during the spring. It may be the scale of the burn was too big. I have actually seen some recent research on turkeys showing that predators tend to come into places that have been recently burned less often. So hens, after a fire has rolled through, actually will come back and sit on their nests. That’s been documented many, many times. Because there are really no rabbits and rats, there’s no reason for bobcats and coyotes. There has also been some interesting stuff that Dr. Marcus Lashley at Mississippi State has shown recently where springtime burning causes a late-summer “green up.” That is really, really good for deer. So you’re getting a lot of really good deer forage at that late-summer stress period in July and August because you burned during the spring.

MYTH: You can get a quail population started on your land by putting out pen-raised birds

If you’re putting out pen-raised birds, that’s great to hunt but that’s not going to get a population started. It has been tried over and over again. Pen-raised birds may survive, not well, and you may have some survive to the springtime. But generally they make poor parents. So it’s not going to work to establish the next generation of quail on your property.

MYTH: You can tell if a snake is venomous or not by looking at the shape of its head

MYTH: Putting gators in the pond will help control the beavers

(Alligator Program Coordinator) Ricky Flynt says no. An alligator will certainly eat a beaver, but they’re not effective in controlling the beaver population.

MYTH: Baby turkeys are so dumb that they drown in rainstorms

Where this myth probably comes from is that if you have a big rainstorm, particularly up north, when the temperatures get kind of cool, the turkeys get hypothermia. The younger turkeys can’t regulate their body temperatures very well and they don’t have much insulation. So if they get really damp and the air temperature is fairly cool, they can get hypothermia very easily. I’m sure (this started when) a farmer came out into his pasture after a rain event and there was a dead baby turkey and said, “Well, this thing is so dumb it just drowned.”

MYTH: The original wild turkeys here were mossy heads, different than what we have today

Some people here claim the turkeys here a long, long time ago were more bronze. And that’s not the case. Most of the turkeys that are here today have been restocked from Mississippi. We didn’t get them from any other place. (Now) there’s some reason to think that in southeast Mississippi and south Alabama, south Georgia, and the Florida Panhandle originally there would have been a hybrid zone between easterns and Osceolas. That may be where that myth came from.

MYTH: We have black panthers in Mississippi

The legend of all legends, right? False. We have never documented a black panther here in Mississippi. Furthermore, originally, there would have been panthers and cougars here, but they don’t have a black color phase. The closest big cat with a black color phase would be jaguars down in South America.