During the May commission meeting, the Commission on Wildlife, Fisheries, and Parks requested that MDWFP staff bring forward a new CWD Zone model that could be promulgated in rule form for public consideration and feedback. This proposed rule was presented at the June meeting for consideration for adoption into the Mississippi Administrative Code, bearing number Rule 2.9. This rule would take effect after a 30-day comment period if approved by the Commission. Comments can be made on the MDWFP website or mailed to the agency’s Jackson office at 1505 Eastover Drive, Jackson, Mississippi 39211.

PROPOSED REGULATIONS AND ZONES WOULD BE:

· Hides with no head attached

· Antlers with no tissue attached

2) Supplemental feeding is allowed in portions of the CWD Surveillance Zones that are not also within a CWD Management Zone.

· All portions of Warren County

· All portions of Issaquena and Sharkey counties defined as:

o All areas east of the Mississippi River

Supplemental feeding is banned in all CWD Management Zones (salt licks, mineral licks, and feeders). Direct contact with prions is the most effective means of transmitting CWD. Research indicates saliva may have the highest concentration of prions. Thus, to minimize concentration of deer and potential spread of CWD, supplemental feeding is banned within all CWD Management Zones.

· All portions of Benton, Marshall, Pontotoc, Tippah, and Union, counties

· All portions of Panola County south of Hwy 315.

· All portions of Leflore County north of Hwy 82

· All portions of Tallahatchie County south of Hwy 32

· All portions of Sharkey and Issaquena counties west of Hwy 61 and south of Highways 14 and 16 (excludes lands west of the Mississippi River main channel). 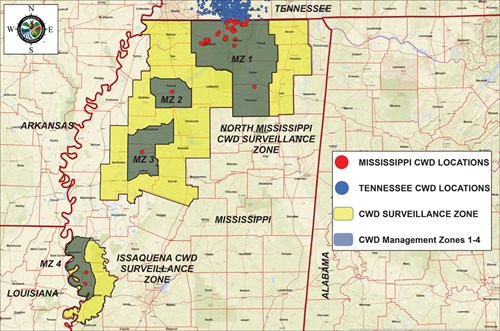