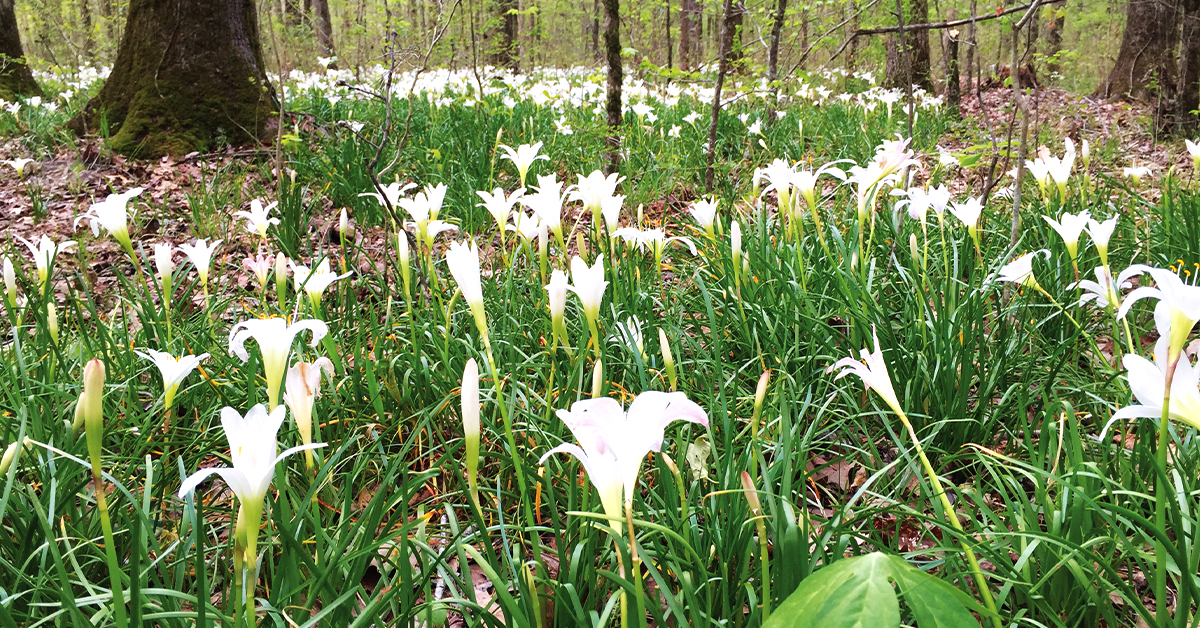 Each spring, before most trees begin leafing out, bottomland forests in East-Central and Southeast Mississippi have a flower display that can only be described as epic. Starting in late February and continuing through April, Atamasco lilies crowd the forest floor by the thousands. Also called Easter lilies by the locals, these glorious, large, white flowers dance in the spring breezes. Other common names include: rain lily, fairy lily, prairie lily, and stagger lily. The scientific name Zephyranthes atamasca alludes to a zephyr, which is a gentle western wind that brings the spring season. Atamasco is a Native American word that has two origin stories: one being described to mean under grass, in reference to the location of the bulb under grass-like leaves, and the other meaning stained with red.

Each plant has a solitary, funnel-shaped flower measuring approximately 3½ inches in length on a foot-long flower stalk and a rosette of bright green, narrow leaves. The outer tips of the flower acquire a rosy tint as the flower ages. The fruit is a three-angled capsule with many flat, papery, black seeds. The plants disappear completely by the time the summer heat comes, but, like Narcissus, will emerge the following spring, having stored energy during their brief season in the sun.

Atamasco lilies range along the Gulf Atlantic Seaboard from Mississippi to Maryland. Mississippi populations are the western-most populations in the United States and extend from Greene County north through Lauderdale County and west to Smith and Scott counties. Because of its limited range in Mississippi, Atamasco lily was added to the Mississippi Natural Heritage Program Tracked Species list in 2013. Thirty-one populations are found in the state.

The first Europeans to encounter this species were the settlers of James-town in the 1600s. Soon, it was in cultivation in European gardens like many American plants. Parkinson, in his 1629 book, “A Garden of Pleasant Flowers,” noted “The Indians in Virginia do call it Attamusco….We for brevity do call it Narcissus Virgineus, that is, the Daffodil of Virginia.”

To this day, many homeowners grow Atamasco lilies in their gardens. It is best to grow this plant from seed rather than trying to transplant the plant. Sow the seeds on the soil surface of a container and lightly cover them. By the second year, they will be mature enough to plant outdoors. The lilies are naturally found in shaded areas; be sure to plant in an area that gets at least afternoon shade. Atamasco lily is not hardy where the ground freezes in winter, although this is hardly an issue in the deep South. Late, heavy frosts can damage the leaves, which in turn can kill the plant through starvation.

The common name, “stagger lily,” is derived from the effect this plant has on horses. Horses will develop “staggers” (a cerebrospinal disease) from eating the leaves or bulbs. All parts of the plant are known to contain several toxic alkaloids. The bitterness of the alkaloids prevents most animals from eating the lilies, even accidentally.

To personally experience a beautiful display of Atamasco lily, you can join the Mississippi Native Plant Society on its first field trip of the year and visit a population in Bienville National Forest. All are welcome to come on this trip, which is usually scheduled for the middle of March. For more information visit, mississippinativeplantsociety.org.