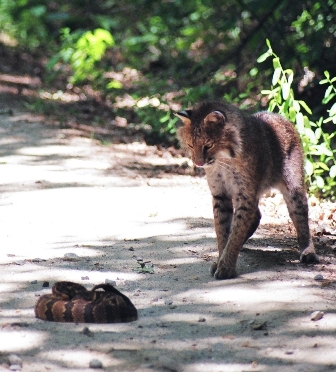 Most turkey hunters would agree that wild turkeys are undoubtedly one of the wariest game species in the woods.  It is this natural cautious tendency that makes them such a challenge to pursue, and is one of the primary reasons so many hunters leave the turkey woods shaking their heads in defeat and confusion each spring.  Although it may often seem as if the birds possess supernatural powers, the truth is that their suspicious nature can be primarily attributed to their low status on the ecological food chain and the ever-present host of threats that surround them.  Even before they are born, turkeys face a gauntlet of potential predators - nearly everything in the woods likes to eat turkeys or turkey eggs.  This fact leads many landowners who desire higher turkey populations to conclude that a reduction in predators is all that is needed in order to turn their property into a slice of turkey heaven.  But is this the right approach?

Of the three, the smallest is the group that can kill adults.  Bobcats are the only carnivores in Mississippi of any major significance to full-grown turkeys.  Coyotes, fox, and great-horned owls also occasionally kill adults, especially nesting hens, but are not nearly as effective.  Yet, in all four, turkeys only make up small percentage of the diet, as each tends to primarily hunt rodents and small mammals.  In fact, despite popular opinion, adult turkey survival is relatively high in most years.  Research in Mississippi has suggested that < 10% of adult gobblers are killed outside of the hunting season as a result of "natural" causes.  Hens are somewhat more susceptible to predation, and anywhere from one-third to over one-half of hens will be killed by predators within any given year, but nearly all of these losses will come during the nesting and brood-rearing season.  During these times, hens are incubating nests and protecting their young, making them much more vulnerable to attack.  Outside of those critical periods, hen survival is significantly higher, and few are usually lost during the period from June - February.

Turkeys are approximately 10 days old before they gain the ability to fly.  Until they reach this critical juncture and are better equipped to escape predators, they suffer heavy losses.  In some years, nearly 8 out of 10 poults that hatch will not live past their second week of life.  Almost everything with claws, talons, or fangs is a threat to young turkeys.  All of the aforementioned species are also predators on the young, and baby turkeys are additionally susceptible to hawks, snakes, and medium-sized mammals like raccoons.  Landowners have limited options available for directly dealing with many of these.  Some, such as the birds of prey, are federally protected.  For others like snakes, effective means for control do not exist. 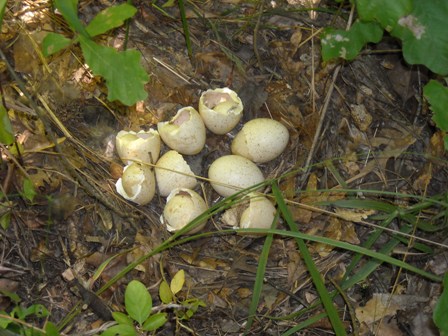 The most significant group of predators effecting turkey populations are the nest predators.  This group is broad, and is composed of everything from crows to armadillos.  Perhaps the most notable of this suite are the raccoon, skunk, and opossum.  These species love to dine on eggs, and are experts at sniffing out turkey nests.  Most - but not all - nest failures are results of this group.  On average, between 40 and 60 % of all turkey nests will be eaten before they are hatched, thus most predator control programs typically attempt to target this group with hopes that their reduction will lead to increased nest success within a particular area.  However, research conducted by wildlife scientists has yielded mixed conclusions regarding the efficiency of predator control programs.  Although some studies have shown that predator control can be an effective means of increasing turkey populations, others have suggested that even the most intensive predator control programs may only result in limited, short-lived success.  This can largely be attributed to the extremely dynamic and complex relationship between predators and their prey.  In many instances, removal of one predator may invite another, or the few remaining individuals will have much higher reproductive outputs to compensate for the temporary decline in the population.  The bottom-line is that predator control must be intensive, large-scale, and continuous to even show minimal positive results, and this level of input is neither economical nor logistically feasible for most landowners.  So have we covered turkey predators from top to bottom just to conclude that nothing can be done about them?  Nope - you just have to think outside the "predator problem" box, by realizing that there are very few feasible options available to deal with predators, but there are many things that can be done to minimize predation.

As was stated at the beginning of this article, turkeys are one of the wariest creatures in the woods because they face threats at every turn.  This, of course, is nothing new.  Turkeys have been dealing with these dangers for eons and have still managed to survive because they are uniquely adapted to overcome the threat of predation when given the right conditions.  Landowners with an interest in turkeys will receive far better results by focusing their efforts toward providing the birds with all the elements they need to gain an advantage over predators, rather than attempting to get rid of the predators themselves.  This is why habitat management is important.  When a property is managed with turkey habitat in mind, the birds will have the means necessary to avoid, detect, and evade predators, and under these circumstances predation may become a non-factor.

So what sort of habitat puts the odds for survival in favor of turkeys?  The answer will vary depending on where turkeys are within their annual cycle.  Nesting hens need dense vegetation near the ground that will keep them concealed.  Likewise, young turkeys need low-growing, lush vegetation that allows them to forage without being exposed to predators and the elements.  For adults, timber stands should not be so dense that the birds are unable to scan for potential danger.  Creative interspersion of these habitat types can minimize the amount of travel required for the birds to meet their needs, which will further reduce exposure to predators.   All of these elements are important parts of a turkey habitat management plan, and all of them can be addressed through specific management practices.

So keep in mind, the first step toward increasing turkey numbers is recognizing that quality habitat - rather than fewer predators - is most often all that is needed for the birds to thrive.  If you are interested in learning more about how you can improve turkey habitat on your property, please contact Adam Butler at (601) 695-6795 or butler.mdwfp@gmail.com.