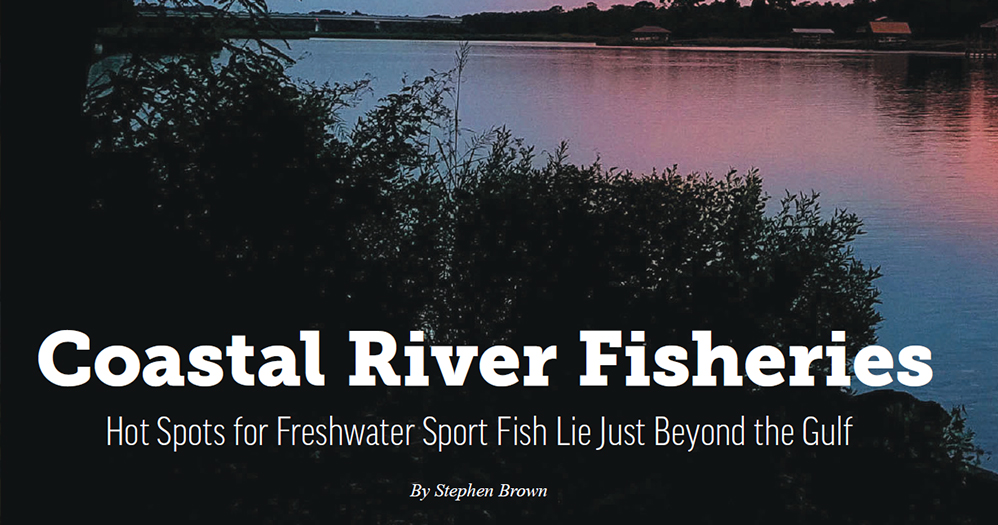 With an osprey gliding overhead, you float down a dark, tannin-stained bay-ou lined with saw palmetto and cypress trees that time seems to have forgotten. Anglers have the opportunity to delve into this forgotten natural beauty in the smaller rivers of the Mississippi coast. When one envisions fishing on the Gulf Coast, thoughts automatically turn to catching speckled trout, redfish, and flounder from the Mississippi Sound and around our beautiful barrier islands. Some also envision fishing in the salt marshes, bays, and estuaries for those delectable saltwater species.

However, well-known freshwater sport fish lurk in coastal rivers that many anglers overlook. In addition to the saltwater species available there, many bays and coastal rivers provide great opportunities for catching numerous quality largemouth bass, spotted bass, bluegill, and redear sunfish. Yes, the fish that are commonly caught in lakes and ponds all over Mississippi are also found in abundance in our coastal rivers and marshes.

Tidal influences and an extensive area of transition allow saltwater and fresh-water species to overlap and coexist. These conditions persist to provide a unique fishing opportunity. Not only do the major coastal waterways like the Pascagoula and Pearl rivers afford ample opportunities for anglers, but the smaller, less popular rivers like the Biloxi, Tchoutacabouffa, Jourdan, and Wolf provide excellent haunts for fresh-water species, including largemouth bass, spotted bass, striped bass, channel catfish, and bream. 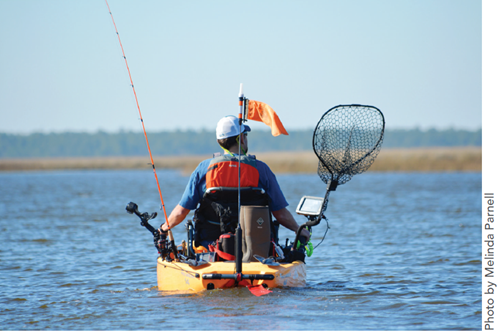 In 2005, Hurricane Katrina dealt the fisheries in the Mississippi coastal rivers a menacing blow. Most coastal rivers experienced extensive fish kills throughout their drainages because of excessive nutrients in runoff from flooding. An effort to restock and re-establish fish populations in the coastal rivers began a few months after Hurricane Katrina. Starting in early 2006, Mississippi Department of Wildlife, Fisheries, and Parks (MDWFP) fish hatchery personnel, with assistance from hatcheries in Alabama, Missouri, and Arkansas, undertook the monumental task of restocking with various sport fish. This intensive restocking effort was conducted through 2009, and supplemental fish stocking continues to be used where necessary.

Subsequently, MDWFP fisheries biologists have consistently surveyed each coastal river to ensure the sustainability and availability of these freshwater species to anglers. Recent electrofishing surveys of the coastal rivers have shown that restocking efforts were very successful.

As an added incentive, anglers can catch anadromous striped bass in the early spring as this fish makes its annual spawning run into the coastal rivers of Mississippi and remains through the summer. 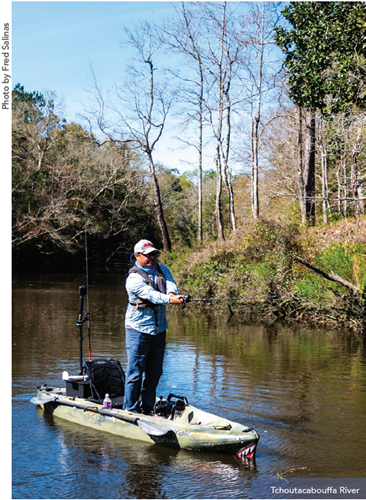 Located in central Harrison County, the river empties into Biloxi Bay just north of Biloxi and south of Interstate 10 and is navigable 31 miles to the north. Tchoutacabouffa is the Biloxi tribe’s word for “broken pot.” Southern Mississippi art potter George E. Ohr, who worked in the late 19th and early 20th century, dug much of the clay he used for his works locally from the Tchoutacabouffa River. The river is navigable in a small fishing boat for most of its length with excellent large-mouth bass and bream fishing through-out. Seasonally, crappie can be caught in the river’s backwater areas. The Tchoutacabouffa River can be accessed from Biloxi Bay and from a private boat launch at the Cedar Lake Road crossing.

Also located in central Harrison Coun-ty, the river empties into Biloxi Bay just west of the mouth of the Tchoutacabouffa. The river is navigable in a small fishing boat approximately eight miles upstream from the mouth. Largemouth bass and bream are available to anglers throughout the river. At the upper end of its navigable portion, spotted bass become the dominant bass species. By boat, the Biloxi River can be accessed from Biloxi Bay and from a recently completed public boat ramp on Old Lorraine Road. Bank fishing is limited to a few road crossings, including Lorraine Road and Three Rivers Road.

Named for the red wolf that once roamed these parts, the Wolf River is located in western Harrison County. The river empties into the east side of Bay St. Louis just north of Pass Christian. From the mouth, the Wolf River is navigable approximate-ly 11 miles east-northeast up to I-10. It is a picturesque coastal stream that is a popular floating destination and a wonderful fishing experience. The river is generally a largemouth bass, bream, and channel catfish fishery throughout its reach. 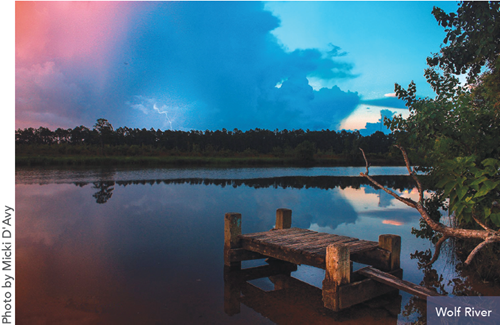 Located in eastern Hancock County, the Jourdan River empties into the west side of Bay St. Louis just north of the city of Bay St. Louis. From the mouth, the Jour-dan River is navigable approximately 23 miles west-northwest past I-10. The river is accessible by numerous public and private boat ramps, including McCleod Water Park, a public campground, and boat ramp located on the banks of the Jourdan River off of Texas Flat Road south of Kiln. This river is largemouth bass, bream, and channel catfish fishery throughout its entirety.

Fishing on the coast is not limited to the open waters of the Mississippi Sound. You can find a beautiful fishing spot in the little rivers flowing leisurely toward the bays and estuaries. Enjoy a day off the beaten path beneath the live oaks and Spanish moss and remember the forgotten rivers of Mississippi.

Stephen Brown is a fisheries biologist for MDWFP.