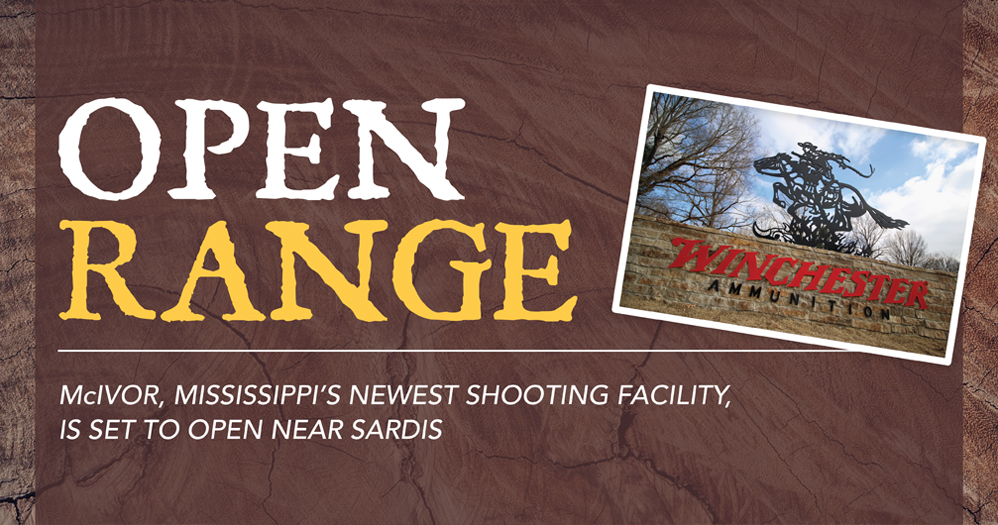 On April 6, the Mississippi Department of Wildlife, Fisheries, and Parks (the "MDWFP") will open the new McIvor Shooting Facility, located at the Charles Ray Nix Wildlife Management Area ("WMA"), in Panola and Tallahatchie counties. The new range will be close to Sardis, Mississippi. The McIvor Shooting Facility is a 300-acre, multi-discipline shooting sports facility representing approximately six years of effort in the planning and execution to place a state-of-the-art shooting facility in North Mississippi, just a short drive from Oxford. The facility is the result of several individual efforts on behalf of the MDWFP, the Foundation for Mississippi Wildlife, Fisheries, and Parks (the "Foundation"), and Olin Chemical, the parent of Winchester Am-munition ("Olin" or "Winchester"), acting through one of its charitable foundations. The idea for such a facility had its beginning when Olin (Winchester) built and began operating an ammunition plant on the outskirts of Oxford in rural Lafayette County. Then-Foundation Executive Director Clark Gordin began making inquiries with Winchester to see if they could offer any financial support to develop a shooting facility near the ammunition plant.

The initial plan included buying land in Lafayette County that could be developed into a shooting facility. Gordin and several key Foundation Board members worked with the Lafayette County Board of Supervisors to attempt to locate a suitable property. Unfortunately, a couple of existing commercial shooting range operations and relatively high property prices caused the project to stall, considering the extremely high estimated costs of land acquisition.

In late 2014, the Foundation was prepared to facilitate a meeting between Chairman, John Taylor, and then-president of Olin/Winchester, Tom O'Keefe. However, before that meeting could take place, fate intervened. Foundation Board Member Chris Gouras was invited to a sporting clays shoot in Central Mississippi where Governor Phil Bryant was expected to attend. Dignitaries from Olin/Winchester and other supporters of the shooting sports also were expected to attend. Taylor asked Gouras to use the opportunity to rekindle Olin/Winchester's interest in helping fund a shooting facility in North Mississippi. Gouras quickly agreed.

Knowing he would need an ace up his sleeve, Gouras discussed the upcoming hunt with his friend, Chuck Cage, a devotee of fine firearms. Cage then offered to "loan" Gouras a vintage Winchester Model 21 side-by-side shotgun to shoot at the event. The Model 21, was the pinnacle of Winchester's firearms production in the 20th Century. The design and embellishment of these fine American-made firearms equaled and surpassed many of the English and Europe-an sporting arms of the era. The sample that Cage brought Gouras was a Grade IV version with perfect wood, metal finish, and full-coverage hand engraving. In other words, it was museum quality. Having shot the course the week prior, Gouras approached the shoot with a good deal of confidence. Using the showpiece Model 21, he was able to best his previous score by 10-12 targets. His performance and the splendid shotgun caught the eye of Olin/Winchester President O'Keefe, who asked to examine the piece. This was the opportunity that Gouras needed. The conversation that followed returned the discussions about building a shooting facility in North Mississippi back to the front burner.

The biggest hurdle to getting the project moving was the prohibitive cost of acquiring land in Lafayette County. The MDWFP answered the challenge by offering to locate the new facility at the Charles Ray Nix WMA near Sardis Mississippi, a short distance from Oxford. Things began to happen. In 2016, Gouras received a call from Tom O'Keefe informing him that the Olin/Winchester board had voted to grant the Foundation $1.425 Million toward the construction of a shooting facility at the Charles Ray Nix WMA. The MDWFP in concert with the US Fish & Wildlife Service was also able to obtain grants for shooting range development to help fund the effort. MDWFP met with the Panola County Board of Supervisors to inform them of the proposed range plans. The plan was met with enthusiasm and the Board expressed its support. Construction began under the auspices of the Foundation in late 2016.

“One of the central themes of R3 is partnerships,” said MDWFP executive director Dr. Sam Polles. “Whether it is MDWFP collaborating with other conservation organizations throughout the state or with hunters and anglers themselves, we must work together to make sure we are creating and empowering more hunters and anglers each year. Building the hunting and fishing community in Mississippi is essential. Without a strong base of consistent participation in hunting, angling, target shooting, and other outdoor recreation activities, the valuable funding each year for wildlife conservation and habitat restoration will decline. This will leave our state with fewer resources and even fewer jobs.” Situated along the I-55 corridor, the range is conveniently located approximately 30 miles from both Oxford and the Hernando-Southaven area of DeSoto County, two of northern Mississippi’s largest population centers.

“McIvor provides a public facility where people in the northern part of the state can have a place to go and shoot and feel comfortable doing it,” said Capt. Scottie Jones of MDW-FP Law Enforcement division and McIvor project manager.

“Our key goal is to provide facilities where people go out and enjoy shooting sports. Some of the big programs we have in shooting sports are the Mississippi Scholastic Shooting Program (MSSP), where schools can compete in the shotgun sports—sporting clays, skeet, trap, and five stand. We also have archery programs within the agency. We’re hoping that youth will one day want to take the next step and go hunting and fishing.”

The facility also will feature a 3D archery range that simulates real-world hunting situations. Visitors can engage animal targets such as deer on a trail through a forested area. Facility managers can move the targets and make adjustments to the trail on the fly, which keeps the experience fresh for visitors.

Although it is located on the WMA, the range will be isolated from the hunting areas, with access to the shooting locations controlled by time cards and counters, similar to  MDWFP’s Turcotte and McHenry ranges. With parking for more than 200 vehicles, plus several spots to accommodate pull-behind trailers, MDWFP officials expect McIvor to be a top draw for hunters and target shooters across the region.

“It’s a huge asset to north Mississippi,” said Jones. “It’s going to provide a venue that will be welcomed by all sportsmen.”

“We are an extremely proud supporter of the McIvor, state-of-the-art shooting sports facility and give tremendous credit to Mississippi Governor Phil Bryant, Dr. Sam Polles, Scottie Jones and the many other leaders who contributed to its development,” said Brett Flaugher, current president of Winchester Ammunition. “The growth of the shooting sports is a deep focus for Winchester and this range is ideal for the many avid outdoorsmen, women, and youth that are looking for a safe and friendly environment.”