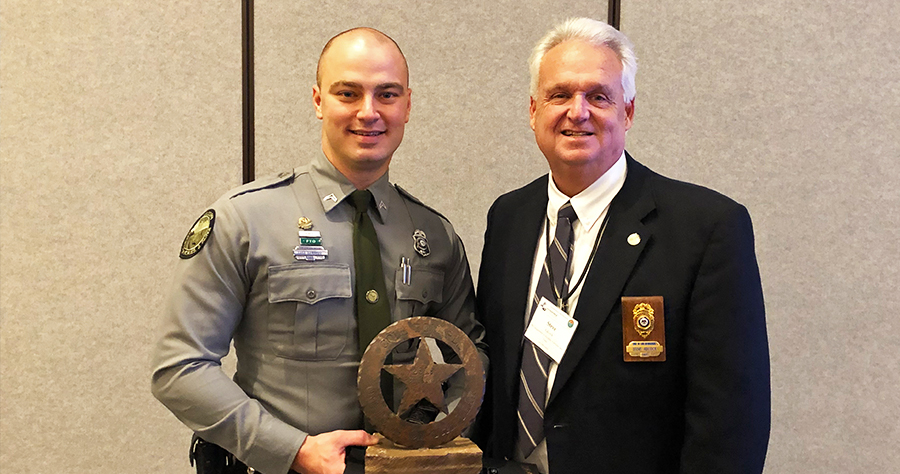 The Southeastern Association of Fish and Wildlife Agencies (SEAFWA) named Cole Edwards the 2019 Colonel Bob Brantley Wildlife Officer of the Year at their annual meeting in Hilton Head, South Carolina this week. Edwards is a conservation officer for the Mississippi Department of Wildlife, Fisheries, and Parks (MDWFP).

Edwards is assigned to Bolivar County. He earned a bachelor's degree in parks and recreation from the University of Mississippi in 2014 and joined MDWFP as a conservation officer in 2015. Edwards grew up in Houlka, Mississippi.

Since joining the Department, Edwards has quickly become an important mentor to other new officers. In his role as a Field Training Officer, he ensures that his trainees are properly briefed and equipped for any situation that may occur. Under Edwards' leadership, two well-trained officers have recently been placed in the field.

Edwards' reputation for taking initiative and building solid cases is well known within the Department, but it is his response to an emergency call at the end of his shift on December 15, 2018, that best illustrates his dedication to public service. On that day, Edwards, assisted by trainee Private Ryan Watson, navigated a patrol boat through floodwaters on the Mississippi River to rescue a man stranded 200 yards from shore. After helping the subject into the boat, Edwards gave him the clothes off his back. During a follow-up investigation, officials with the Bolivar Medical Center in Cleveland, Mississippi said the subject would have died from hypothermia within the hour if the officers had not arrived in time.

“Corporal Edwards is a dedicated officer who works diligently to get the job done while going above and beyond the call of duty," said MDWFP Executive Director Sam Polles. "He is very deserving of this award."

In addition to his law enforcement duties, Edwards takes public outreach seriously. Throughout the year, he volunteers to educate the public about Mississippi's game and fish laws, hunter safety, boater education and career opportunities in conservation.

The Association's Wildlife Officer of the Year Award is determined by nominations submitted to the head of law enforcement from the SEAFWA states and territories. In addition to direct law enforcement, an officer is selected based on community service, outreach and education, interdepartmental cooperation, and innovations that may be utilized by other officers and departments.

The Southeastern Association of Fish and Wildlife Agencies (SEAFWA) is an organization whose members are the state agencies with primary responsibility for management and protection of the fish and wildlife resources in 15 states, Puerto Rico and the United States Virgin Islands. Member states are Alabama, Arkansas, Florida, Georgia, Kentucky, Louisiana, Mississippi, Missouri, North Carolina, Oklahoma, South Carolina, Tennessee, Texas, Virginia, and West Virginia.