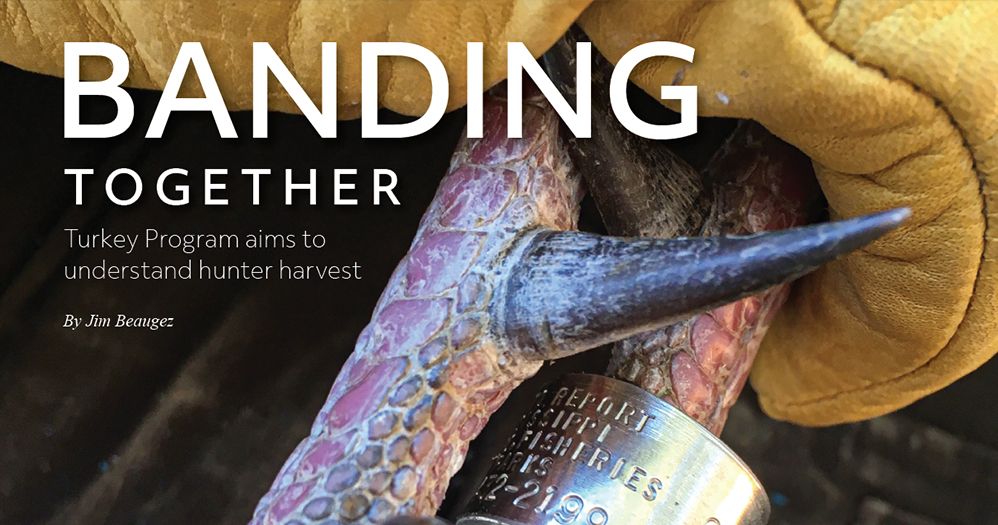 Turkey hunting is a game of skill, wits, and, most importantly, patience. Jared Davis of Hurley has pursued turkeys for only four years, but after the 2019 season he seems versed in all three.

On a windy morning last spring, Davis sat on a ridge in the DeSoto National Forest and listened. He did not call and he certainly did not move. After hours of patience, he was confident no gobbler was going to speak up on its own. He finally decided to try his luck.

“I'd sat there all morning long and didn't hear a gobble, so I decided to go down in a bottom off this creek where we'd heard gobbles before,” Davis says. “I actually tried a gobble for the first time, yelped, and then I gobbled twice and I shut up. About 30 minutes later, he was sitting in my lap.”

The turkey, which had a 9¾-inch beard, never made a sound. 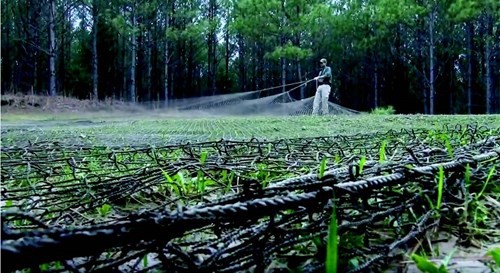 Preparing the rocket-propelled net for trapping

Davis’ excitement grew when he approached the bird and saw that it had two metal bands, one on each leg below the spurs. He had heard about Mississippi Department Wildlife, Fisheries, and Parks’ (MDWFP) banding program, but he knew it was an anomaly to have two (historically, turkeys often would receive two bands in case one were to break or slip off, but today, though only one band is necessary, a turkey occasionally will get double-banded). Then a few weeks later, to Davis’ astonishment, he connected on another banded tom several miles from where he encountered the first.

“We've made changes on some WMAs, moved the season opener later on a couple of them,” says Butler, “and so we're wanting to have banded birds on those areas and also on some other areas that did not receive the change. Over time we can compare the two to one another, so we are able to assess what impact it had.” 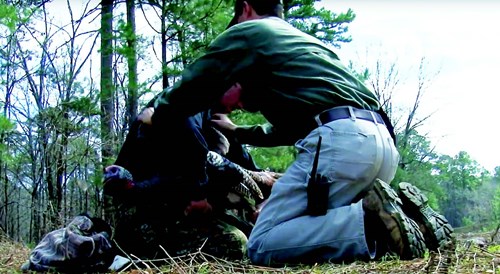 Securing a wild turkey for banding

While the investigation is intended to run at least three years, Butler says early results have already shown some surprising differences.

“On the WMAs where we moved the season to April 1, there was a noticeable increase in gobbling activity as compared to all WMAs,” he says.

“We want to try to get the most we can out of the population that’s available, and by delaying the season until the peak of gobbling, hunters should experience a higher quality hunt because birds have not been removed, they've not been pressured and yet they're at their peak when the season starts.”

Turkeys were hunted to near extinction in Mississippi in the early 20th century, but ongoing conservation efforts resulted in population recovery by the 1990s. Banding is the next step of MDWFP’s turkey management program to maximize the resource for hunters.

“Mississippi was one of the first states to really complete its restocking program, where birds were caught in the wild and relocated to areas with sufficient habitat that lacked a population,” Butler says. “Most of this work was completed in our state by the early 1980s, but birds were still being relocated into a few northern counties on into the 1990s. For all practical purposes, we were done restocking turkeys by 1994, but most other states were just getting started by then.” 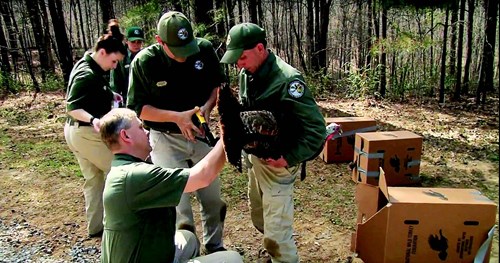 Wildlife biologist apply a band to a wild turkey

Capturing turkeys, whether for banding and immediate release or for restoration elsewhere, is a challenge in itself, worthy of the most stoic hunters. As much patience as turkey hunters must exhibit to bag a bird, coaxing a rafter of turkeys to a trap site requires just as much effort.

“I have turkey hunted since I was a kid,” Butler says, “and as much respect as I had for the birds’ wariness and alertness, when I became a biologist and started trapping turkeys, that respect went to a whole new level.”

First, the biologists locate an area where turkeys frequent and find an open spot that is large enough to attract and capture several birds. They then lay the capture net and cover it with pine straw and spread wheat, milo, or another grain to attract them to the exact location. After that, the waiting game begins. It could take hours, or it could last for days.

If the study calls for collecting a flock of eight turkeys, for example, two or three could show up fairly quickly, while others lag behind. Unlike turkey hunting, where a hunter might only have a gobbler in sight for a short period before shooting, the window of time when trapping multiple turkeys can be much longer. This means everything must be perfect; otherwise, the turkeys will get suspicious.

“We usually go to extremes to camouflage things,” Butler says. “When we're initially baiting up an area, we'll do a mockup of the whole setup. So, we won't put the blind up necessarily, but we may cut a bunch of limbs and heap them up in a pile to make them kind of look like where the blind's going to sit. When it comes time to set up the actual trapping gear, the entire area has to look exactly as it has been for the days or weeks the turkeys have been feeding there.” 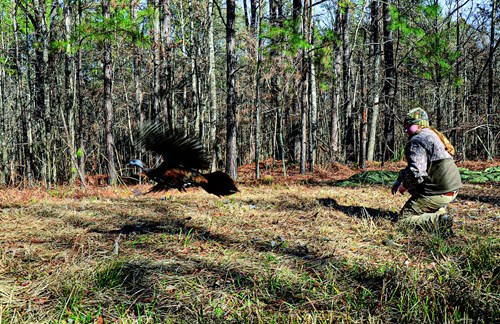 Butler even places decoys of the rockets that propel the net over the turkeys in advance. At the moment of truth, they fire the Army howitzer-grade rockets and the net covers the turkeys.

“When the turkeys get lined up near the bait and have their heads all down, you press the button, and boom, it shoots the net over the top.”

When a hunter bags a banded turkey, Butler stresses, they are not in trouble — harvesting is the intent of the banding. But they are encouraged to contact MDWFP with the band number and information about the harvest so biologists can record the data.

“As a state wildlife agency, one of our foremost responsibilities to the public is to monitor and understand what's going on with different wildlife populations so we can make informed recommendations on things like season frameworks,” Butler says. “Determining the percentage that gets harvested is a critical component of that.”