Black Bears in Mississippi: Past and Present

Perhaps no other state in the southeastern U. S. is as rich in bear hunting tradition as Mississippi. The vast acreages of bottomland hardwood forests and impenetrable canebrakes of the Mississippi Delta were home to high densities of black bears at the turn of the century. The lure of hunting bear from horseback with the aid of dogs created some of the earliest legends of bear hunting, while attracting many dignitaries and heads of state from across the country. Of course, no other bear hunt is quite as famous as the Teddy Roosevelt hunt. It took place at the turn of the century in Sharkey County and led to the creation of the now famous Teddy Bear. For those who don't know, legend has it that the president refused to shoot a bear that had been lassoed and tied to a tree by his guide, Holt Collier, a bear hunting legend in his own right. A political cartoonist caricatured the event in Drawing the Line in Mississippi,â€ which showed the president turning his back on a small bear being restrained by a rope. A toymaker requested the president's permission to name his small stuffed bears Teddy's Bear. The rest, as they say, is history. 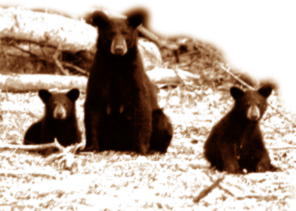 Today, the once majestic bottomland hardwood forests of the Mississippi Alluvial Valley have been reduced to scattered and isolated remnants of their former glory. Many of the vast swamps and lowland areas which served as safe havens for thousands of bears throughout Mississippi have been drained and cleared so that the fertile black soils can be used for agriculture. By 1980, more than 80 percent of the bottomland hardwood forests of the Mississippi Alluvial Valley had disappeared. And what became of the black bear population that was once so great as to bring the President of the United States to the Mississippi Delta? Black bears were listed as endangered in Mississippi in 1984. The Louisiana black bear, which is the subspecies that occurs in the southern half of the state, was listed as federally threatened in 1992. There are only small differences in skull size and shape between the American black bear in north Mississippi and the Louisiana black bear which is found in the south. MDWFP biologists currently estimate the Mississippi bear population at 40 to 50 bears in the entire state and that's being generous.

Most of the bears in the state are found along the drainages of major rivers such as the Mississippi, Pearl, and Pascagoula, although bears can and have been known to show up just about anywhere. Most of the bears found in the state are believed to be transient males that have wandered across state lines. They are the dispersing products of breeding populations of bears that border our state in Arkansas, Louisiana, and Alabama. So how can Mississippi have such few bears and no documented reproduction while populations continue to grow just across our borders? The answer is simple. Mississippi is lacking in female bears. Female bears generally establish a home range partially within or adjacent to their mother's home range and, therefore, are less likely to disperse across state lines like the males. Adult females have been known to have home ranges of up to 20,000 acres, while adult males can easily cover two to eight times that area. Considering these facts, it's easy to see why the majority of bears found in Mississippi are males and why the population is so slow to naturally expand.

There is good news, though. Black bear sightings in Mississippi have been on the rise in the last few years. It is difficult to determine, whether this is due to an increase in the actual number of bears in the state or if it is the result of increased public awareness of bears. Either way, it is an encouraging sign. The majority of sightings have come from counties bordering the Mississippi River and from coastal counties such as Jackson, Harrison, and Stone. Almost everyone that reports seeing a bear or bear sign on their property is genuinely excited about the possibility of having the bear in the area. To tell the truth, most of the people who report bear sightings have likely had bears in the area for years. They would never have caught a glimpse of these shy creatures, though, without being made aware of the bears or without the use of motion-sensor cameras.

Habitats for bears, as well as countless other species of wildlife, have been on the mend, especially in the Delta region of the state. Through government programs such as the Wetland Reserve Program (WRP) and the Conservation Reserve Program (CRP), thousands of acres of marginal farmlands have been planted in bottomland hardwood species of trees. In years to come, these replanted areas will not only provide increased habitat for bears, but will also serve as corridors linking isolated patches of hardwood forests found on public lands throughout the Delta. Studies have shown that bears favor areas with the least amount of disturbance from humans, yet another testament to their shy nature. It has been widely believed that, due to the endangered status of bears in the state, any area that contains bears is greatly restricted from any habitat manipulation. In fact, quite the opposite is true. Bears utilize many different kinds of habitats within their home ranges. While they may use mature hardwood forests for hard mast and den trees, bears also benefit from cutover areas that provide escape cover and soft mast food sources.

Trapping efforts are under way to learn more about the bears that make their home here in the state. Early this summer, a bear was sighted on the Twin Oaks WMA in Sharkey County. After a couple of weeks of pre-baiting, traps were set, and on June 17 a 235 lb. male bear was caught. The bear was in molt, so it had a relatively thin coat of hair, but was in very good condition otherwise. As an interesting note, he had no tail, whatsoever. The bear was given ear tags, a PIT tag (a small microchip injected under the skin), a tattoo, and a radio collar. The radio collar will allow us to keep track of the bear so that we can learn more about his movements and habitat preferences. Thus far, the bear has been fairly cooperative, staying in and around the Twin Oaks area and showing a fairly routine travel pattern. Whether he remains in the area (or county for that matter) remains to be seen. Our hope is to have several bears collared throughout the state so that we can make better estimations about population numbers and habitat utilization in different regions of Mississippi.

To learn more about black bears in Mississippi, or to report a bear sighting, contact the Mississippi Museum of Natural Science, at (601) 354-7303, or call your MDWFP district office. By learning all that we can about the Mississippi black bear, we can work together to restore a vital part of Mississippi's natural legacy.