The black bear's range covers most of the North American continent.  They are found in Alaska, much of Canada and the United States, and extend as far south as northern Mexico.

There are two subspecies of black bear in Mississippi; the American Black Bear, in the northern part of the state, and the Louisiana Black Bear, found in the southern two thirds of the state.

Most of the bears in the state are found along the drainages of major rivers such as the Mississippi, Pearl, and Pascagoula, although bears can and have been known to show up just about anywhere.  In more recent years, bears are beginning to move north from the coast and east from the Mississippi River.  At one time, most of the bears found in the state were likely transient males that wandered across state lines.  They were the dispersing products of breeding populations of bears that border our state in Arkansas, Louisiana, and Alabama. 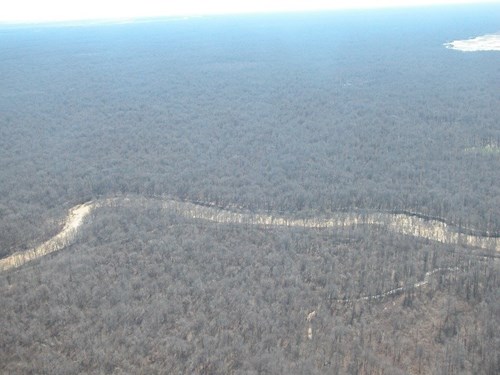 For black bear populations to grow and overall range to expand, expansion of breeding females is the key.  Since 2005, the MDWFP has documented the births of over 30 cubs in the state.  This is a major milestone as prior to 2005 there was no documentation of cubs for 40 years.  MDWFP biologists currently estimate the Mississippi bear population to be about 150 bears in the state, a major improvement over the estimated 40 individuals in 2002.

Black bears are currently found in three general areas within the state: the Gulf Coast, the Loess Bluffs of southwest Mississippi, and the Mississippi River Delta.  Range sizes vary depending on habitat quality.  The average home range for an adult male bear is roughly 20,000 acres while the average home range for an adult female is roughly 5,000 acres.  Home range for black bears is influenced by several factors.  Habitat type, sex, age, season, environmental conditions, food availability, and population density all play a significant role in determining size and shape of a bear’s range.  Range sizes typically increase during the summer mating season and during fall when bears are foraging heavily to build fat reserves. 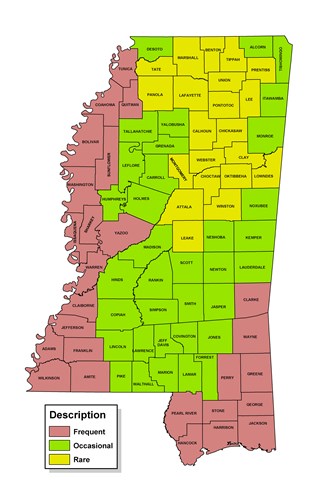 Black bear sightings in Mississippi have been on the rise in the last few years, especially during the early summer when yearling bears are dispersing to establish a home range and breeding season for the adult bears occurs.  Not only is the actual number of bears increasing but public awareness has increased as well.  The majority of sightings have come from counties bordering the Mississippi River and from coastal counties such as Jackson, Harrison, and Stone.

Each year however, more sightings are occurring towards the central part of the state.  Almost everyone that reports seeing a bear or bear sign on their property is genuinely excited about the possibility of having the bear in the area.  To tell the truth, most of the people who report bear sightings have likely had bears in the area for years.  They would never have caught a glimpse of these shy creatures, though, without being made aware of them through the use of motion-sensor cameras.

Movements within the range of a bear are primarily for meeting habitat needs and finding potential mates.  Bears are most active from dusk through dawn and will often use daybeds during daylight hours.  Mothers with cubs often rest at the base of a tree so, if disturbed, she can send the cubs into the safety of the tree.

As with many other factors relating to bears, movement is related to time of year.  Immediately after emerging from the den, bears exhibit decreased activity while the remainder of fat reserves are used.  Bears become more active throughout the spring as more food becomes available.  During the late spring and early summer, bears are at one of their most active times of the year.  This is due to a few different factors including the transition from spring to summer forage, yearling bears (primarily males) being pushed away from the mother who is ready to breed again, and the breeding season being in full swing.  During the fall, bears are also active as they are searching the landscape for food to build fat reserves to last them through the coming winter.